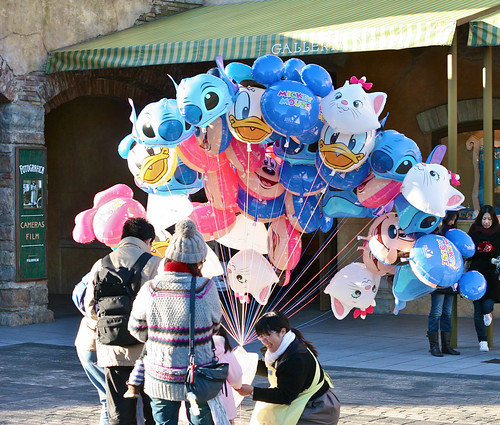 New Year’s Day tends to be a fairly quiet holiday in Japan. With most of the focus being on spirituality and family, most businesses are closed. As a tourist, this could have made the day difficult.

But: amusement parks are still open. So at the suggestion of our friend Richard Whittaker, we hopped a train for Maihama Station and Tokyo DisneySea, the uniquest of the parks at Tokyo Disney. Sure, it may not be the truest experience of what Tokyo is like, but if this is where the Japanese go for a mini-vacation, it must be worth a shot. 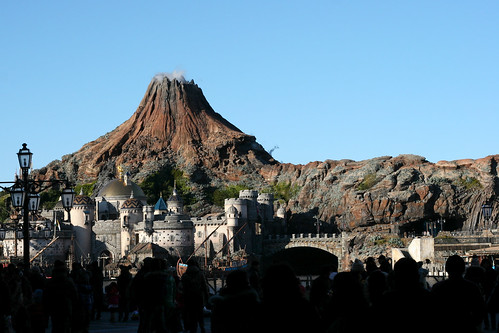 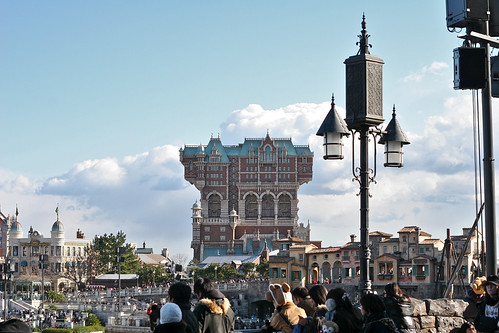 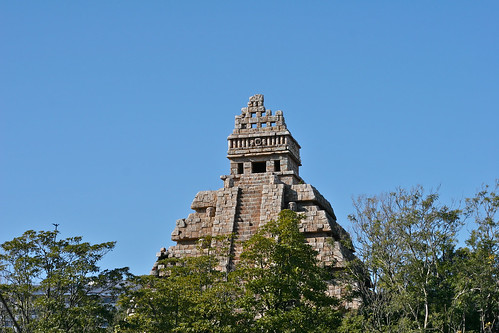 Tokyo DisneySea is divided into seven distinct areas, ranging from the Arabian Coast (Aladdin themed) to Lost River Delta (the ruins, home of the Indiana Jones ride), from the American Waterfront to the Mediterranean Harbor. All have an immense sense of scale, and the architecture is meticulous. The Cape Cod area within the American Waterfront actually could be mistaken for Cape Cod were it not for the giant volcano looming in the background. 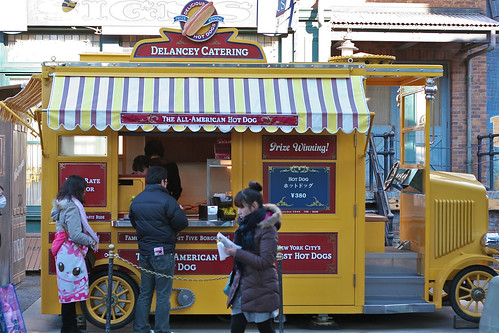 That doesn’t mean there aren’t some amusing juxtapositions, like the above hot dog truck, the Liberty Fish Market, and the fact that you can find it spelled as “Cape Codde” on a sign.

The rides are generally a lot of fun, and FastPass-ing is free as an alternative to standing in line. I recommend StormRider (a giant motion simulator that takes you into “the eye of the storm”), the Indiana Jones Adventure: Temple of the Crystal Skull (better than the movie!), and the Tower of Terror (which jerks you around a lot more than the one in Orlando).

Beyond the rides, there were a few cultural discoveries: 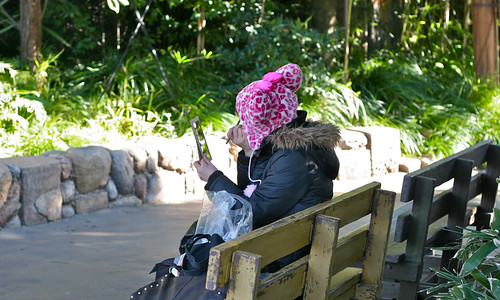 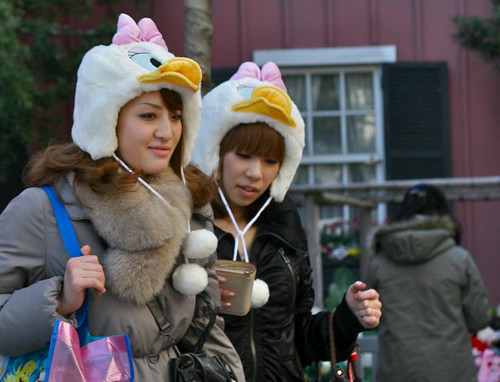 First: the Japanese really love character hats. Lots of teenage couples (yes, the guys too) were sporting the sort of fuzzy hats you see here – normally with Mickey ears, but a lot of Stitch hats and a good number of Donald/Daisy ones as well. It all seemed perfectly normal, with no one pointing or laughing. There was a refreshing lack of irony the entire day. 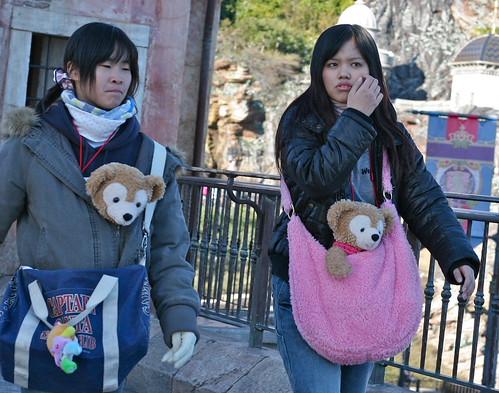 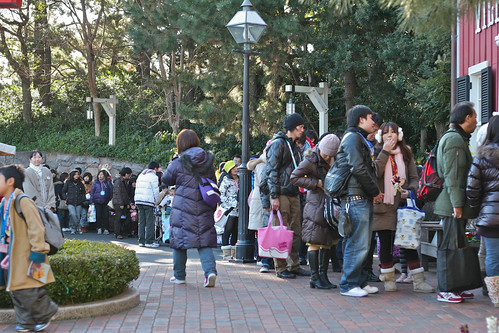 Second, and perhaps most confusing of all: Japan is in love with Duffy. Unfamiliar with Duffy? So was I.

The Bear of Happiness and Luck, Duffy is impossible to miss if you spend more than five minutes in DisneySea. Ultimately, he’s just a stuffed teddy bear, but there’s backstory of Minnie giving him to Mickey before he went on a long trip for good luck. The trend seems to be to buy the largest Duffy Bear you can manage, possibly buy an outfit for him, and carry him with you in the park (or stuff him into your coat).

The number of Duffy bears you will see carried around the park is astonishing. Some girls had upwards of eight in various sizes and locations on their outfits. People were routinely seen carrying three foot tall Duffy bears. The primary shop to buy Duffy outfits/accessories had a 15 minute line outside to get in (pictured above). 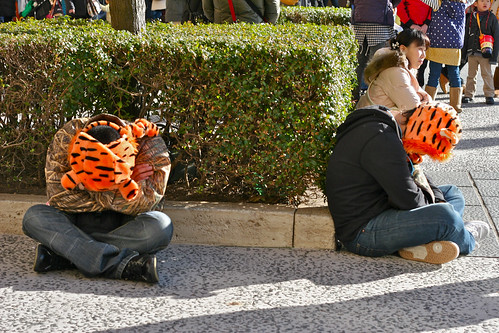 Third: Japan looks fairly kindly on public sleepers, and we saw over a hundred of them around the park. People passed out in restaurants, on benches, along the walls of the park – they all just sack out and eventually wake up. Coming from a city where falling asleep publicly usually leads to a lighter wallet, it was sweet (but disconcerting) to see.

Lastly: concessions in Japan destroy American theme park food. Just out of what I sampled/saw:

* Endless amounts of popcorn – strawberry, as well as caramel, chocolate, curry, and black pepper. Lots of people were carrying around souvenir refillable buckets, and nearly every popcorn cart had a line.
* Ice cream – sea salt ice cream, tiramisu flavored ice cream sandwiches, and gelato.
* Spicy smoked chicken legs
* Cheesecake chimichangas.
* Tacos made with fresh tortillas
* Churros in various flavors – chocolate and sesame
* Perhaps most amazing of all – gyoza sausage rolls. Pork sausage with peppers and onions, wrapped in gyoza dough and steamed. Like a traditional sausage roll, but lighter and more delicious. Someone needs to bring these to America, because (a) it was amazing and (b) I need another one.

It’s not just the quality, it’s also the price – most everything I just listed was available for $5 or less. I’m not sure $5 gets you much of anything at US theme parks these days. Normally at theme parks, I strive to avoid eating much of anything because of the inevitable cost – but this was a dream. (Hell, even admission was about $20 cheaper per person than Disneyworld in Orlando.)

It may seem silly to visit a theme park while on vacation – this wasn’t something we planned far in advance – but we had a great time, and can only recommend it for those looking to see a refreshing take on an experience you may generally think of as cliché.