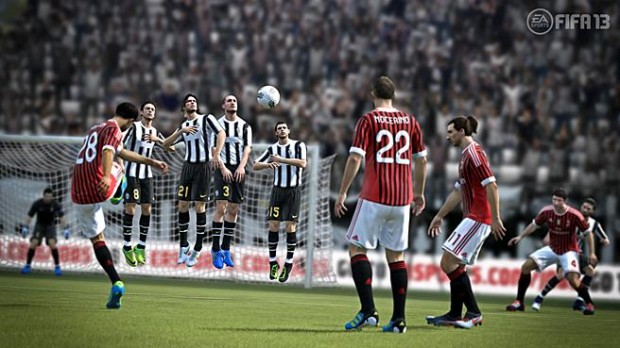 I was originally hesitant to include FIFA 13 on my list this year. Despite playing more in my third year with the series than either of the two previous, most of my confusion from last year remains. The game remains difficult to learn the nuances no matter how much time you spend with it. Just a week ago, I finally figured out that when you’re taking a free kick, up and down are for the direction of spin, not where you want to place the ball (ala how you take a penalty). Yes, this took me three years with the series to figure out.

Even with its obtuseness, I have a much deeper appreciation for FIFA this year, because I’ve had a chance to see what an institution it is worldwide.

– Just about every soccer player cares deeply about how they’re represented in the game. There’s a certain measure of self-worth and pride related to how close to reality one appears in the game. Stats, placement in the lineup, and accuracy of the player model all matter on different levels. Dax McCarty, the defensive midfielder for the Red Bulls, was perhaps the most glum on the team about FIFA 13; mostly because he wasn’t in the team’s starting lineup (despite starting nearly every game this season), but also because his character model had been given clown-red hair instead of his actual strawberry blonde hair.

– It’s become the sort of game where EA must blow millions of dollars on promotion. There were a variety of game changes from 12 to 13, but the biggest (and most costly) was easily EA wrenching away the image rights for Lionel Messi from Konami. Observe this year’s “JOIN THE CLU13” ad and try to ponder the budget involved in getting some of the top names in the sport crammed in for so many little cameos. Even the parties are absurd, as best illustrated by Graham Parker’s amazing recap of the NYC launch party. (I didn’t get an invite this year; clearly this is the next big step towards my legitimacy as a sports journalist.)

– If you think free-to-play games on Facebook are terrifying, then you must not be familiar with FIFA Ultimate Team (or more commonly, “FUT”). FUT has a simple enough premise: open packs of cards, assemble a team, play as that team through seasons or tournaments. But the cards have limited contracts, so they can only be used so many times before you have to apply a contract card to extend their usefulness. You have to be cognizant of preferred formations, chemistry with nearby teammates, fitness, morale, and possibly which month the player’s birthday is. The in-game currency for winning matches is rarely enough to keep your team operating for very long, so soon you’ll turn to the marketplace in an attempt to buy and sell cards to achieve enough of a profit to keep things going.

There was a big rash of Xbox Live account hacking last year that was linked to FIFA. People would crack accounts, quickly purchase Microsoft points, buy gold player packs, and transfer all the cards to another account. It became known as “getting FIFA’d”. How many freemium games do you know that get used as a nickname for a specific type of criminal activity?

FIFA 13 is so engrained in soccer culture, it’s hard to not be into it if you’re into the sport. Journalists, players, front office staff, musicians, fans – everyone’s in. Come on – how many other games are going to lead to me talking smack with a player I respect?

And it’s a clean 3 – 0 victory I El Classico vs @gothamistdan… With Barcelona clearly the dominant side. Back to the drawing board 4 Dan— Heath Pearce (@HeathGPearce) October 10, 2012

FIFA 13 is available on just about every system known to man. My experiences were largely with the PS3 and Windows versions.