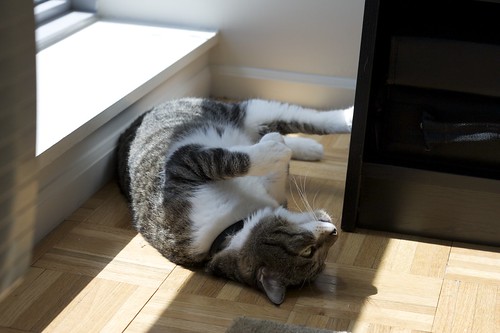 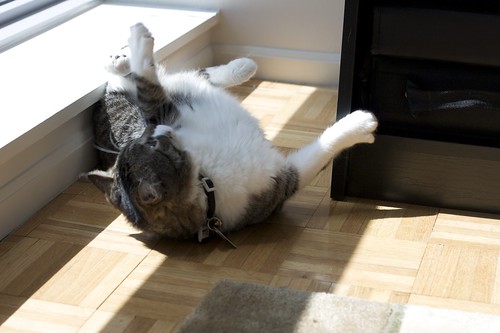 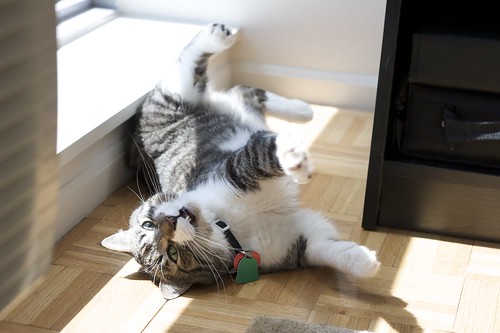 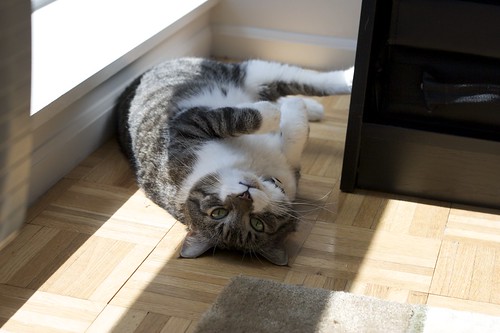 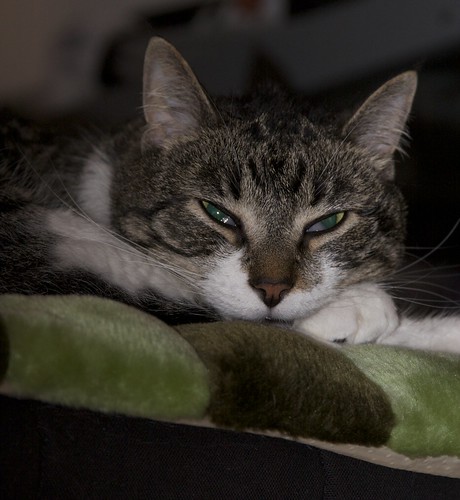 Our poor cat has been through a lot in the last 48 hours.

Like all of these sorts of stories go, it was supposed to be a regular vet checkup. But after bringing him into the Astoria Veterinary Group, it appeared that his teeth and gums – something that had been pointed out as a potential problem in the past – were in bad shape. They recommended a “deep gum cleaning”. Katie had to leave him behind at the vet, turning a day that was to be spent relaxing with the cat into a day of worry.

The call came around 2:30: he was fine, but the “deep gum cleaning” had turned into a “double tooth extraction”. His trademark fang had apparently been loose and very exposed, as had the tooth directly below it. Both were removed, turning his usual expression – a little bit of exposed fang – into a lip curled sneer that would make Elvis proud.

Buttons returned home at 7PM last night, still drugged out of his skull from the procedure. This manifested itself in odd ways, particularly in his communication skills. Normally, he gets attention with a loud, cute “WOW!” – he doesn’t meow. Last night it was more of a “Wowwwwwweeeerrrrrrooooooooooooowweee.” He also walked around the apartment at least eight times as though he had no idea where he was – although he was very sure he still wanted to go under the kitchen sink.

We’ve had the catsujin for just over five years now (he’s five and a half); this is the first time he’s undergone a procedure of any sort. Being as attached as we are, Katie and I have both acknowledged an inability to deal with the idea of something happening to our cat. Taken as a test of how we would handle a small-scale event, it is easily argued both Katie and I failed brilliantly. We followed him around trying to cheer him up, lamenting to each other that we’d hope he’d be okay and back to his normal self soon.

To what may not be a surprise, he was back to normal not long after midnight, when he nuzzled up to Katie and watched an episode of *Buffy* on her computer. (They frequently share late-night TV watching. Apparently I’m not invited.) The morning brought the usual pillow-stealing, food-demanding, and lounging on the carpet that we’ve grown accustomed to with him. He greeted us home from work with proper-sounding “WOW!”s, and as I type he’s nomnomnoming away at a catnip plush duck.

Thanks to everyone who sent well-wishes over Twitter and concerned IMs; we do tend to joke that he has a fan club but it’s nice to realize it’s not such a joke after all. 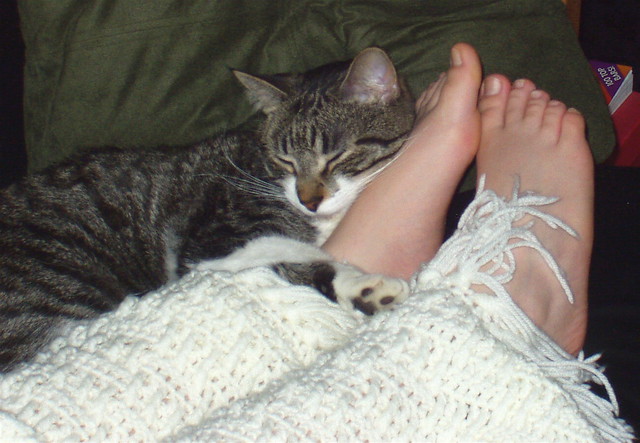 As much as Buttons relies on me for food / water / litter cleaning, he loves to cling to Katie. And mysteriously, he seems to know just what Katie needs in the way of attention.

Yup, he’s gently hugging the foot that Katie injured. Cutest thing I’ve ever seen him do.