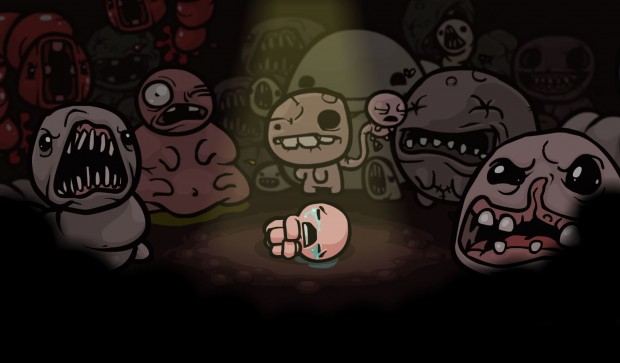 It is remarkably easy to dismiss The Binding Of Isaac. At first glance, the game appears grotesque, sickening, perhaps even juvenile. In a world full of games trying to be art, why would anyone want to dive into a game that looks like it revolves around bodily fluids?

To answer my own question: because it’s the most emotionally charged game you are likely to play this year.

Let me take nothing away from the game itself. It is a brilliant hybrid of roguelike games (levels and items are randomly spawned), The Legend Of Zelda (the familiar dungeon perspective, keys, bombs, bosses), and twin-stick shooters (primary control method). Experienced gamers are in for a treat, as the game scratches some serious arcade and RPG itches. Even if the game was abstracted away from the atmosphere of Isaac’s world, it’d be worth playing.

But oh, that world. Isaac’s plight is that his mother was told (by the voice of God) to kill her son. He escaped her murderous rage to a basement filled with other abandoned and disfigured siblings he didn’t know he had. The opening movie where this is introduced that feels tremendously unjust: watching a smiling stick-figure Isaac oblivious to his mother’s gradual insanity gives you a sense that maybe you can make this right, that maybe you can help this small child overcome evil.

But again – this is a roguelike game, and one of the core tenets of roguelike games is that death is permanent. I would go so far as to argue that death should be expected – you are going to die, and die often. You will space out temporarily and get in over your head, and all of your progress will be wiped as your character collapses. It happens — it’s part of the game mechanic, and generally part of the fun. But how I ached every time Isaac expired, as I was presented with the hand written note that starts with “Dear Diary: Today I died.” (It gets worse from there.) It wasn’t just that I had failed. It was that I had failed him, a poor character who’s only chance was my guiding hand.

The game is full of these little moments where the game twists the knife. Not long into game, you may realize that your primary weapon are your tears. All of the power-ups modify your appearance slightly, and sometimes disfigure you as well. The loading screens show Isaac in a fetal position, remembering injustices he’s suffered previously. And so on. It’s a constant emotional assault, a guilt trip to motivate you to play.

And at least for me, that works, because it makes me want to help Isaac out of this terrible mess he’s in. I want to see him overcome all the obstacles in his way. I want to get him out of that awful basement and back up to his toys. And that makes beating the game that much sweeter.

Lots of games don’t do a good enough job trying to get you to connect with your avatar. When you try to quit this title, Isaac asks “Are you sure you want me to die?”. It’s a little blunt, no doubt, but there’s no other character in gaming this year that I cared about more than poor little Isaac.

The Binding Of Isaac is available for Mac and PC.