While I don’t have a hard and fast date for an anniversary, this year feels like it’s roughly the point at which I’ve hit 30 years of playing video games. (Having just passed my 33rd birthday, this is a rather large amount of my life.) In that time, I have played countless games across most every platform ever released, and I have a surprisingly good memory of nearly every game I ever played.

Or perhaps I should say, every game, save one.

There was one DOS-based game that, despite repeated attempts to dig it up online, I had failed on more than one occasion to unearth the name of. What I could remember was this:

That was all I had to go on for the last 20 years to try and figure out what the hell the game was called.

Tonight, while puttering around on NeoGAF, I saw a thread called “Games that no one has played on NeoGAF except you“. Clicking in, I couldn’t help but think how great it would’ve been had I remembered the name of that game.

But I didn’t have to. Someone else called it out, with a screenshot, 48 replies in: the game was Zeliard.

Check out those CGA graphics!

Check out that box art! 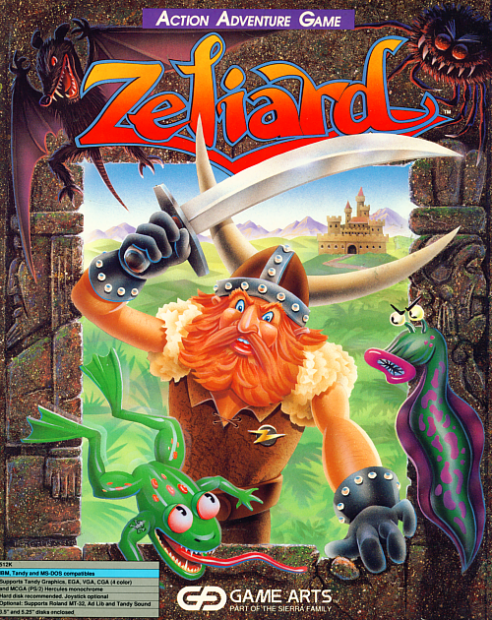 And the best part? Check out this amazingly straightforward marketing text from the back of the box:

Once in a while, a game comes along that you can truly get in to. A game that gives you all the entertainment of an arcade game, and all the adventure of a role-playing game. A game that keeps you coming back again and again. ‘Zeliard‘ is that kind of game.

Zeliardlooks like a lot of ‘sword and sorcery’ video games you’ll find in your local arcade. But as you ‘hack and slash’ your way through eight levels of underground caverns, other elements will come to life. Accumulate wealth with every hideous creature you slay; outfit yourself with increasingly powerful weapons and magic; gain the strength to defeat even the most deadline enemies, and finally, emerge a hero.

Zeliard is an incredibly fun action-packed game you’ll have a hard time tearing yourself away from. Get into Zeliard — because you can.

There’s even a very small little fan community, and a Flash remake.

Zeliard was indeed published in the US by Sierra Entertainment around 1990, but it was originally developed in 1987 by a Japanese developer called Game Arts. In the gaming industry, that length of time would usually be the kiss of death, but Game Arts continues to exist, being the studio responsible for the Grandia and Lunar series.

So in a strange way, Zeliard was my first real exposure to Japanese gaming mentality. (And obviously, it stuck with me.)

Now if I could just find that old BBS door called n-space, I’d have put all my gaming mysteries to rest.