I’m breaking my own rules tonight and highlighting two games that seem like absurd things to have been made into games. Both of these games were released after I originally put together my list of games for this blog post series. In the end, I couldn’t decide which deserved the feature more – and seeing as I can’t stop playing either of them, here’s praise for both of them. 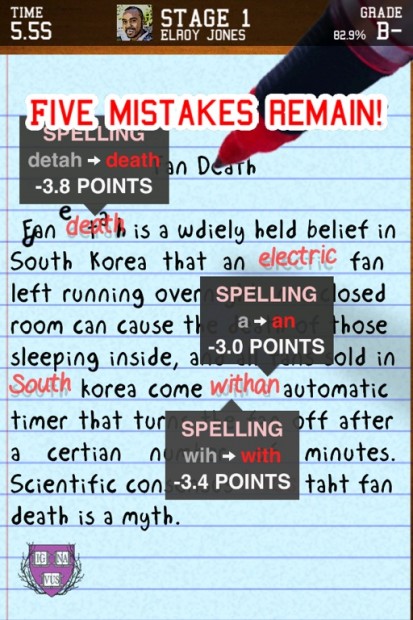 The Grading Game is proof that eventually, everything will get turned into a video game. In this case, you are a poor hapless TA trying to pay off your student loans. Grouchy faculty member Dr. Snerpus is more than happy to give you sums of cash if you’ll just do one thing: flunk your fellow students.

No, really. A virtual term paper (culled from various places online) will be thrust in front of you, and your job is to tap on the randomly added errors. Typos, capitalization errors, grammatical mistakes, and run-on sentences are all right before your eyes, in an assortment of different game modes. Sometimes there’s only one error in a fairly long paragraph. Others, there’s more errors than normal, but tapping on a non-error drains your clock heavily.

As a gaming concept, I know this sounds completely ridiculous. Who would want to grade papers (particularly terrible ones) for fun? But like any good “find the hidden object” game, The Grading Game works because you’re having to process information very quickly to find the things that are out of place. The pressure of the clock and the bizarre topics for the papers (Grief houses! Sun sneezes! Jigglypuff! Shoe Throwing!) make it a tense, abstract puzzler.

Besides, is any game that can help improve your writing skills that bad? (Everyone loved Mavis Beacon way back when.) 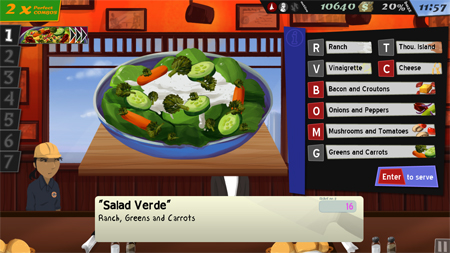 Cook, Serve, Delicious! is a little more traditional, but only just – it’s a “hardcore restaurant simulator”. The daily grind of operating a restaurant is an exercise in planning and multitasking.

Take menu construction: do you go with simple foods like french fries, which you can turn out quickly for limited return? Or do you tend towards expensive soups that require more prep work? You may think maximizing profits sounds great now, but when you’re fielding three orders and a sink full of dishes during the lunch rush? Not so much.

You’ll balance the need for equipment upgrades against buying new and upgraded recipes. Health inspectors will come by. You might get robbed and have to provide an artist’s sketch of the perp. Catering gigs become available. Invites to an Iron Chef-style competition arrive. I think there’s even a dating component and some sort of Kickstarter system.

It sounds like work, and it is work. And like all work, sometimes the reward is in doing a job well. When you get a large combo rolling and juggle complicated orders without missing a beat, you feel firmly in the zone. Completing a round in Cook, Serve, Delicious! provides a lovely sense of relief and completeness.

It’s a bit reminiscent of the original Cooking Mama, but with a shorter fuse and higher stakes. Definitely worth a look.

The Grading Game is available as a universal iOS app. Cook, Serve, Delicious! is available on Windows, OS X, and for the iPad. My experiences were largely with the iPad version. Both games are on sale for the immediate future.