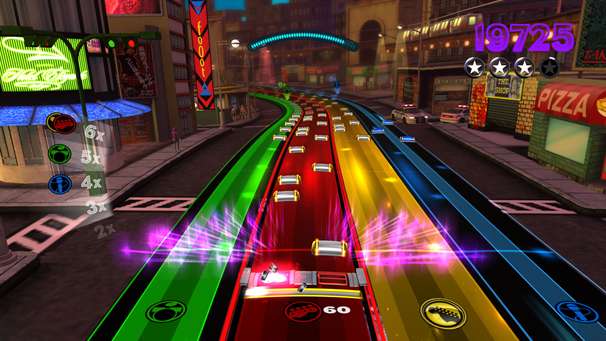 When game historians look back on this era, they will hold up Rock Band Blitz as a shining example of muddled, poorly thought out game design.

This should’ve been a slam dunk. Take a beloved music game franchise, and give gamers who have invested in that franchise a way to reuse all their content. Wait, no, even better: give them 25 more songs for that franchise they love when they buy your $15 game. And don’t even go very far in inventing a different model of actively playing the game – it plays similarly to Frequency or Amplitude, games Harmonix released a decade ago. (Hell, it’s even simpler: there’s only two notes per track!)

But then Harmonix decided to tinker. They added a “coin” system in which one has to buy power-ups per song. This mechanic has been beaten into the ground by Popcap and other Facebook game developers, who tend to make sure there’s a giant button nearby that says “BUY MORE COINS”. Weirdly, there’s no opportunity to buy additional coins; there’s no appeal for you to spend any money other than on additional songs. But a full slate of powerups cost enough that you won’t earn as much back, so it’s a pretty constant dwindling of your coin stash.

But wait! Harmonix added a special challenge system, where weekly goals provide you the opportunity to win additional coins if you play well. It would’ve been an acceptable trade-off, except for one tiny thing: the only way to get into the goals is through a Facebook app, not in the game itself. Almost all of the social elements of the game are driven into Facebook; if you don’t sign into the app, you will never get to touch that part of the game.

Want to check on how far along you are on a particular goal? Have to go to your computer and log into Facebook.

Want to challenge your friend to a “Song War”? Have to go to your computer and log into Facebook.

We are 6+ years into the current console generation. Sony and Microsoft have both put a ton of energy and money into developing reasonably functioning social networks within their consoles. Forcing your paying customers to use an interface outside of the game to access core functionality is such a shockingly poor move, I honestly can’t believe it game from a developer with the level of good will and community faith that Harmonix had.

Long time Rock Band fanatics were all crushed. Plaguefox on NeoGAF provided a good take on why this is all so messed up, with this money quote:

Unfortunately, it isn’t working. I am coming away from each play session aggravated. I’m not ending sessions just because I’ve had enough play time, I’m cutting them short because the game mechanics are working against me in a way that saps all of the joy of playing out over the course of a handful of songs. I think I’m officially in the “I regret buying this game” camp at this point.

Rock Band Blitz easily takes the cake for the most disappointing title I played in 2012.

Rock Band Blitz is available on PSN and XBLA, and is perhaps only worthwhile as a cheap songpack for Rock Band proper. My experiences were with the PSN version.