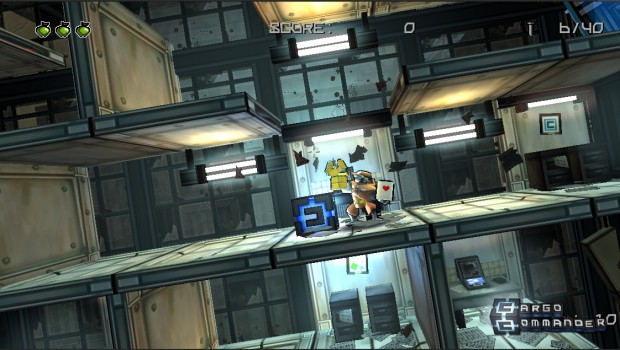 You, in space, alone. A solitary life of drilling through space junk welcomes you in Cargo Commander, a quirky little indie game that popped onto my radar this year.

It’s rough around the edges – some graphical aliasing, some launch bugs on OS X, some obtuse gameplay mechanics. But there’s also a lot to like about it – a creeping dread storyline, generous randomization to keep you on your toes, and a great anticipation of cracking open a giant new space container and seeing just what’s awaiting you inside (and if it’s deadly, floating away in an act of defiance). It feels faintly like a roguelike, but with the perma-death eased up a bit and gradually earned upgrades helping you along.

The game is full of lovely small touches. Perhaps the greatest silly little joy is a helpful mention on one of the game screens to press the F key if you need to relieve some stress.

What does the stress relief key do? Causes your hapless character to shout some variation of “FUCK YOU” to the vast emptiness of space around him. It sounds juvenile, but after escaping a series of collapsing containers with only a sliver of health, you’d be hard pressed to want to hit any other key.

Cargo Commander is available on Steam for Mac and PC. My experiences were with the Mac version.