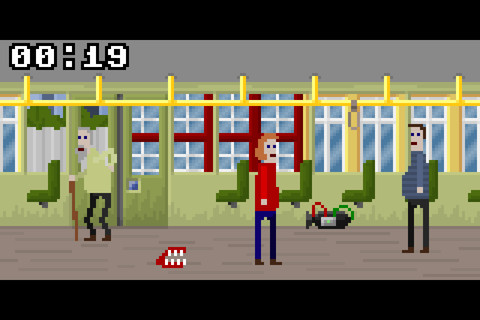 I spoke of “anti-gaming” as a concept earlier in the month when praising Frog Fractions. It’s a growing genre where antagonizing the player – or the gaming industry itself – is the fun. And no game did that better this year than McPixel.

McPixel is a point-and-click adventure game without the adventure. A level starts, 20 seconds appears on the clock. You know there’s a bomb *somewhere* on the screen. Clicking on something interacts with it – picking it up, manipulating it, or trying to kick it in the genitals. Your goal: prevent the level from exploding.

Sometimes it’s obvious. The bomb is exposed, you pee on it, the fuse goes out.

The game is an endless trial-and-error experiment; screwing up a level doesn’t penalize you, it just takes you on to the next in the series of 5 that you haven’t completed. But to fully complete the game, you don’t just need to find the right solution – you need to see all the wrong ones, too. Completing all the possible actions across the three rounds in each level unlocks a bonus set of levels. The humor takes ridiculous flights of fancy, and is often crudely animated, but I’ll be damned if I wasn’t snickering the entire game.

The biggest joke of all comes when you unlock the final round. I don’t want to spoil it – because after you’ve played through something like 80 levels, you start to think you’re getting the hang of how the game thinks and acts. And when you see that last level, you can’t help but burst out into a full laugh. It’s that absurd.

For gamers who have lived through the rise, fall, and rise again of point-and-click adventures, the game is a reminder of the futility of the medium – clicking blindly, trying everything in the room, hoping something leads you to the solution. Most everything in McPixel is a solution – they’re just not all the right one.

Highly recommended for people who appreciate adventure games and have a sense of humor similar to mine.

McPixel is available on iOS, Android, Windows, OS X, and Linux. My experiences were with the iPad version.