I’ll spare you the prologue; my impressions is that this the most awaited out of all of the yearly gaming posts. So much so that I’m actually going to put screenshots in this one. You can see where my priorities are.

It was difficult to narrow this down – but in the name of brevity, I’ve narrowed it down to a dozen titles that every iPhone owner should have on their phones. As I write this, to buy all of these games will cost you $30 – probably less than any one of the console games I recommended yesterday. 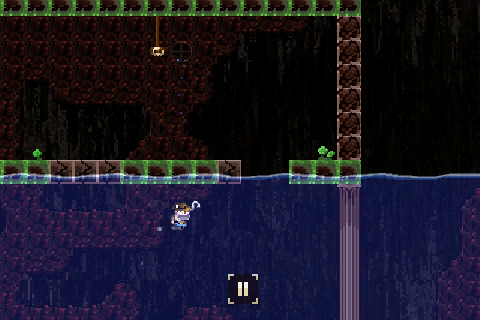 Hook Champ is easily my iPhone title of the year. At it’s core, you have a simple premise – swing away from the ghost chasing you, grabbing treasure all the way. That would nearly be enough – but when you add in an addictive equipment upgrade system, retro-y pixel graphics, challenging levels, online challenges, and regular major updates to the game, and you get one of the most addictive arcade games of 2009. 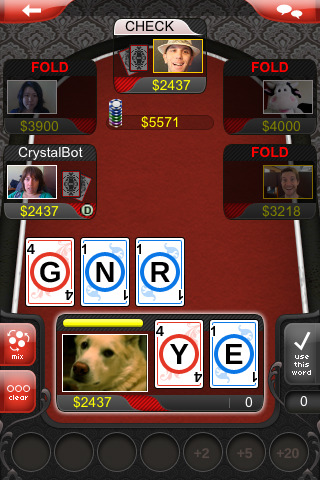 I like Texas Hold’em. I like word games. I like competition. Ergo, I like Word Ace, Self Aware Games’ incredibly fun (and often frustrating) game that blends Texas Hold’Em and Scrabble into something even better than those individual games. I loved the game so much, I leapt at the chance to buy a physical deck of Word Ace cards – enough so to end up with the very first one. Most everyone I’ve shown this to has loved it as well, and at a cost of $0 it is hard to resist. 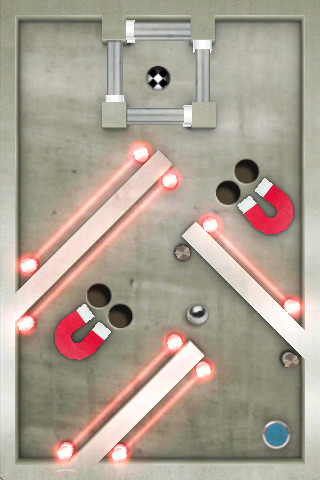 I tend to stay away from games that use tilt controls as a primary input method – they are nearly impossible to play while commuting, which tends to be one of my heaviest iPhone usage periods. But Labyrinth 2 has that moxxy to make my not care. The framerate is as smooth as I’ve ever seen on the device, there’s a limitless set of levels available for download, and there’s a nicely progressing set of awards and achievements to keep you going. 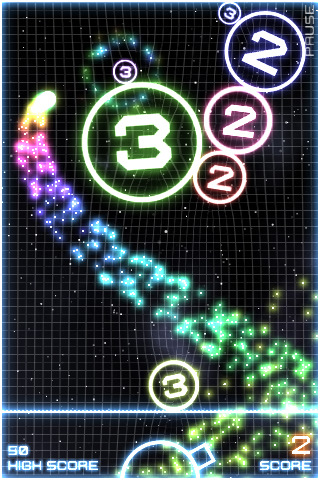 There’s something wrong with the world when a great physics puzzler like Orbital can go under most everyone’s radar. Fire orbs into space to destroy the orbs you’ve already fired – a simple concept, with one touch controls. The glowing graphics are slightly reminiscent of Geometry Wars, as is the Facebook integration to compare your scores against those that you know. 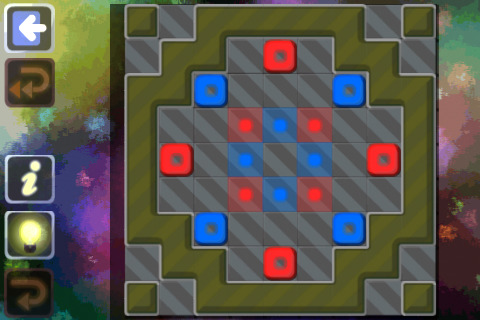 Block pushing puzzles have been popular for years, and Blockoban is a notable release this year. It would be enough that the block sliding controls work great, and that there’s a random board generator, but the business model seals the deal even further. The first 100 puzzles are free. If you want another 800 (!), as well as all the solutions, it’s just a $3 in-app purchase. If you need a puzzle game that lasts, this may be up your alley. 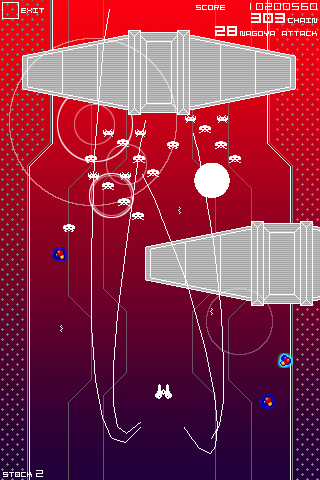 I like when a company is willing to take a franchise and evolve it. Space Invaders Infinity Gene may play that “evolution” card a little obviously, but this is a shining example of taking something that people love and making it better across the board. Lots to unlock, dynamically-generated levels based on your music, and a really clean look make this the game I dumped the most time into mid-year. 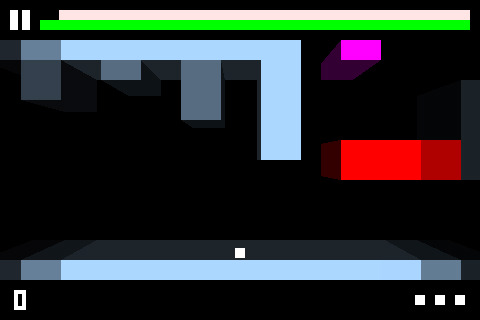 A mix of Pong and platforming, Squareball has you dragging the landscape around to bounce your square ball through some tricky terrain. It’s hard to get excited from the screen shots, but trust me – in motion, it’s a blast. 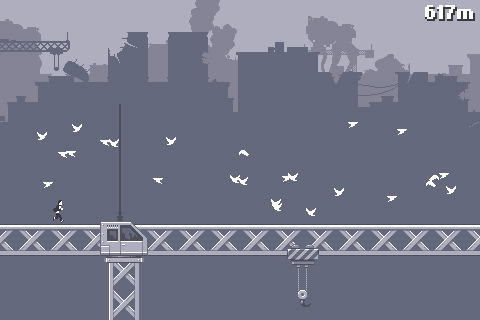 Canabalt captured hearts and minds early this year as a simple Flash game that had you vaulting across rooftops to escape an unnamed threat. The iPhone version was initially a little feature-starved, but it finally received an internet high score board and is now rock-solid. 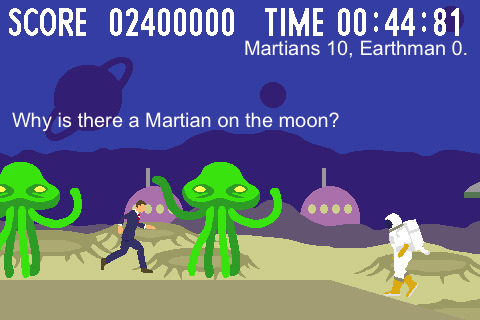 Let’s say you like the idea of Canabalt, but you’re not into this whole futuristic minimalism asthetic. No, let’s say you want a business man who’s behind schedule and who has to leap over dinosaurs, samurais, and fat cosplayers. Behold! Konami’s Tomena Sanner is the game for you! It’s Canabalt with a sense of humor. The load times can be a bit excessive, and there’s no internet ranking, but this game actually made me laugh at some of the jokes – a rare feat. 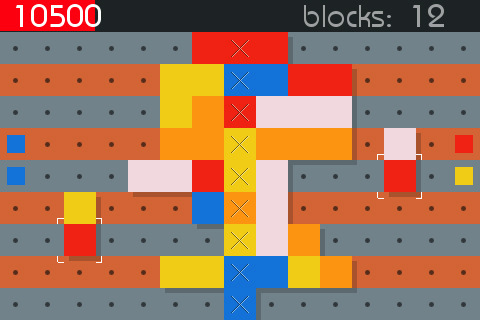 I see the appeal of people wanting Tetris on every conceivable platform – it’s a very familiar block puzzle. But if you’re willing to try something a little different, give Unify a spin. Pieces drop from the left and right (you’re matching colors rather than making lines), and the controls are so well tuned that you’ll be playing on both sides without too much trouble. Block dropping junkies would do well to pick this up. 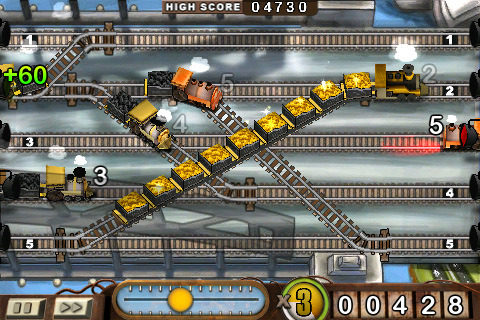 The iPhone has given rise to what’s been dubbed “chaos management” games, and with Firemint’s Flight Control having sold two million copies, I doubt there’s a lot of people unfamiliar with the concept of dragging everything into the right place. Voxel Agents’ Train Conductor manages to constrain the chaos a bit to generate a frantic train-transferring experience. The game mechanic makes it easy to get into a trance state where you’re just reacting without thinking, something I can’t quite do with Flight Control. 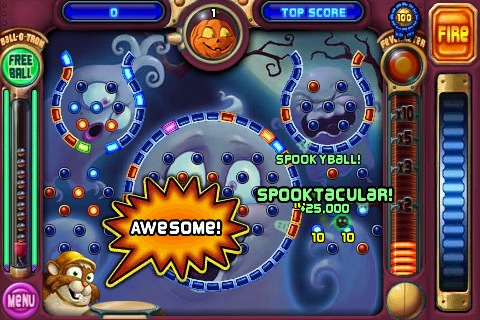 Popcap promised us Peggle. They delivered us Peggle. Things were never quite the same. (The iPhone version of Peggle destroyed the DS version by having better controls and far better graphics, never mind being a fraction of the price.)

It was inevitable that a few iPhone games wouldn’t live up to the hype this year.

ngmoco:) had hyped Eliminate Pro for months before it finally hit the market and turned out to be a pretty unremarkable FPS game. Kudos for actually shipping a full blown FPS game, but it just didn’t feel particularly fun, and the initial nonsense with having to “recharge” killed any momentum I had.

EA knocked out great game after great game this year – except for Rock Band. Perhaps no one should’ve had high hopes for a conversion of a series so reliant on plastic instruments, but there’s been plenty of decent music games on the platform. The iPhone edition of Rock Band just feels lazy, almost like a generic J2ME game.