I was overjoyed this morning to see Zach Brooks from Midtown Lunch reporting that Má Pêche (aka “Momofuku Midtown”) was serving food on the mezzanine level. (The full restaurant is not yet open.)

Being in the middle of Project Momo – where I am inadvertently visiting every Momofuku establishment in a ten day time span – I would be remiss in not going and trying out Má Pêche, even in this limited capacity.

Má Pêche is located within the Chambers Hotel, a fairly compact establishment in the heart of Midtown. The mezzanine is pre-existing and has not been remodeled in any particularly “Momofuku style”; the chairs are all mismatched, and my party of three was seated on a couch and a sling chair. Some scattered artwork was on the walls. I would expect the actual restaurant to have a more appealing visual quality.

I’m happy to say that we were seated immediately, although there were scattered people waiting for their parties to all show up. 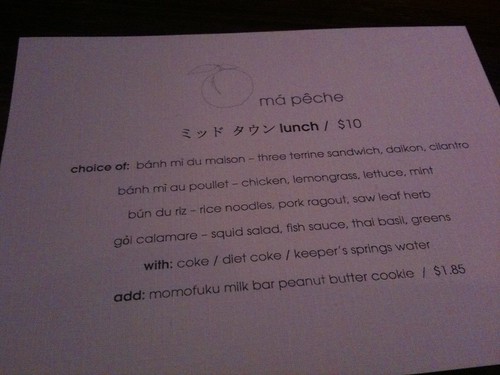 There is an “all day menu” that features some traditional hotel fare (a grilled cheese sandwich, a burger, a strip steak) alongside what you might expect (pork & porcini terrine, hue style chicken soup), but the real appeal is the midtown lunch special, which you can see above. $10 gets you a lunch meal which includes a main and a beverage. A cookie from Milk Bar can be added for $1.85. This price may seem oddly chosen, but I think it’s deliberate to keep it under $12, the magical “midtown lunch” price point that Zach Brooks has defined so well. 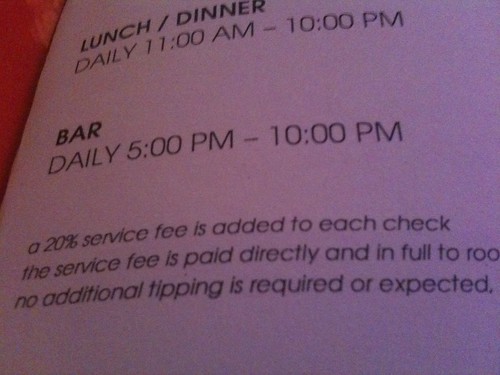 One aside – the full menu indicates that there’s a 20% service fee added to each check. I am thankful that the staff added the line that “no additional tipping is required or expected” and spelling out where the service fees go – to the staff. But as an oddity, our bill didn’t include this fee. I didn’t ask as to why; it may be that the lunch specials are exempt? Will have to go back and investigate. 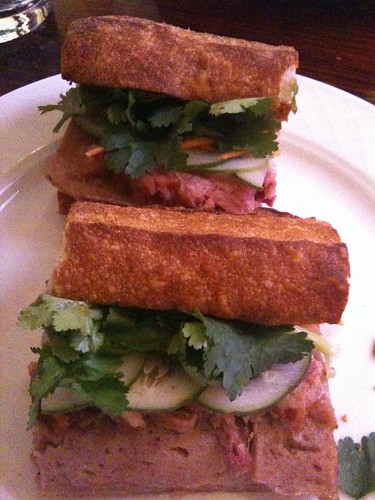 I ordered the Bánh Mi du Maison; the Vietnamese sandwich has seen a rise in popularity around the city as of late. It’s not a stranger to Momofuku menus, and I’m glad to have finally been given the chance to try it. The baguette has a crunchy exterior and a chewy interior; the meat to veg ratio is right on the money; the flavors all meld together into a pretty damn good sandwich. 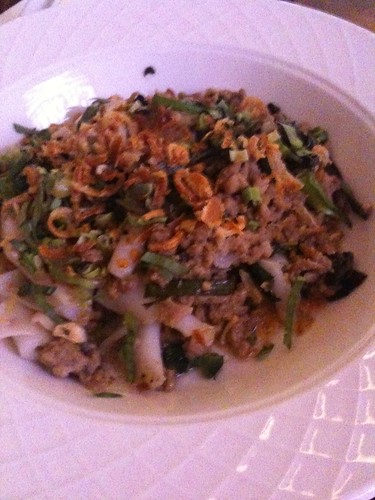 My dining partners both ordered the bún du riz – rice noodles in a pork ragout. I had a quick taste, and had no complaints. It’s reminiscent of the spicy rice cakes with sausage at Ssam Bar, just with less heat and noodles instead of cakes. I may get this the next time, actually. 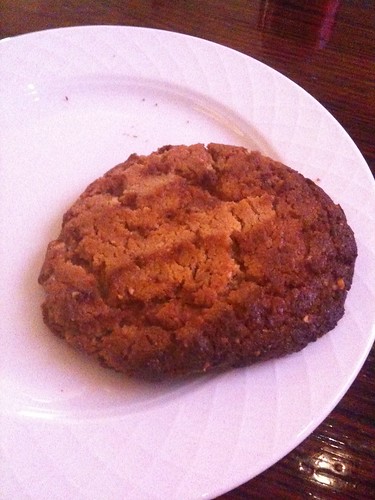 I have repeatedly referred to Christina Tosi (of Milk Bar) as an evil genius, so there was no chance I was going to pass up on the peanut butter cookie. Unsurprisingly, it’s just right – crunchy edges, soft middle, and full of strong peanut flavor. (They are not fresh baked, though – I was told that the “milk and cookies” from the all day menu are, but the expectation is that they’ll go through so many lunch specials that it would be infeasible to bake them throughout the day.)

As far as service goes, it’s better than I would’ve expected for the first day. Food came out quickly, but we didn’t feel rushed; we did get asked by three different members of the wait staff if we were ready to order (only the first time was necessary), but it’s a minor complaint.

Total bill for three lunch specials with two add-on cookies, after tax and tip, was $42. Extremely reasonable for this part of town. Total lunch time – including the round-trip walk – was exactly an hour, much better than I expected.

Conclusion? It’s good. It’s really good. And it’s a testament to the entire crew that they can get service running so smoothly on the first day. I will undoubtedly be adding it into my standard lunch rotation…and may be back for dinner tonight.

RELATED: Zach Brooks loves it. As does Eater.