It is fall of 2005, and Bemanistyle is down for an indeterminable length of time.
An upstart gaming center in Rhode Island called Tokyo Game Action immediately felt the effects of this outage – their website was hosted by Bemanistyle. Without a proper website, their community was being extinguished – and for an arcade that largely relied on the patronage of hardcore gamers, community is everything.
But as luck would have it, my forums were readily available – and in a decision I don’t honestly recall making, I quickly made a temporary forum so they could keep operations going. (A similar forum popped up on Shoryuken to maintain the fighting game side of the house.)
That was when I first had a chance to talk to Andy McGuire, the owner of TGA, who sent me a heartfelt note. I was immediately struck by his courtesy and motivations for opening TGA:

I don’t know how much you know about TGA, but TGA is unique in the fact that we are 100% dedicated to bringing the best Bemani experience possible to the United States. I won’t bore you with the sacrifices I have made and continue to make to make TGA a reality, but in short I do it for the love of the Bemani community and a service to humanity.

Every penny that TGA receives, goes right back into the store. I have accepted that TGA is my God given mission (literally, I am a Christian) to bring happiness to people in a way that’s not violent or vulgar. I live a simple life and dedicate all my time and finances to make this work.

Besides finances the most important part of keeping TGA alive is communications. And our website being down has killed us. But because of your assistance TGA is surviving and helping keep it’s head above water.

He offered to send me a full set of IIDX Happy Sky E-Amuse cards as a token of his gratitude – but as enticing as they may have been, I declined. I wrote to him then:

While I greatly appreciate the offer, I’m going to have to politely decline for a simple reason: After being in the community for 4 years (as of next week, anyhow), I have seen far too many places come and go – people who pour their heart and souls into businesses like this and unfortunately after a certain number of months, flame out for whatever reason. I would much rather see you keep the cards and sell them to your regular customers and keep the business going properly. 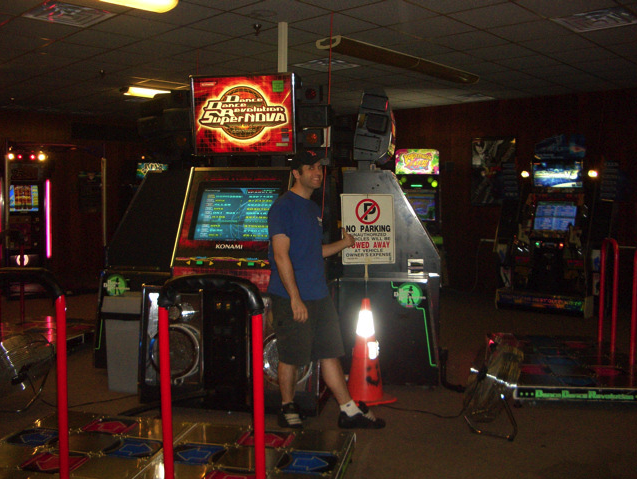 Andy’s dream had, thanks to his selflessness and sacrifice, managed to survive since that time. TGA played host to two Bemani community festivals, both fantastically received. And through the last three years, Andy always managed to keep all of his Bemani machines up to date with the latest releases – which is not an easy task when they are intended for release in Japan only.
But while he was in Japan in December – researching the newest Bemani releases, working on getting BlazBlue – disaster struck Massachusetts, and TGA was heavily damaged by flooding.
TGA stayed closed after the flood, but Andy did everything he could to work towards re-opening.
Today, Andy’s dream has come to a heartbreaking end:

Tokyo Game Action is officially closed forever. With no income and other problems due to the flood, we are drowning in bills it is impossible to recover and reopen.

To pay our creditors and to prevent my family from being thrown out on the street (literally), I am left with no choice but to auction all of TGA’s assets.

TGA will be auctioning everything we have in May to pay our bills. Every game, pcb, poster, keychain, chair, plate, fork, Arch stand, figures, software, bowling ball, everything in TGA has to be sold.

My heart goes out to Andy and his family, to all the staff of TGA, and to everyone who had the opportunity to call it their arcade home.
I hope to finally make the trek to TGA in May for the final liquidation – not in the hopes of purchasing anything, but to give my respects to a man who wanted nothing more than to bring happiness to a community of gamers.