In response to Gaming 2008: The iPhone, sanchny wrote in:

> I got an iPhone last month and didn’t know where to start with all the apps, but I now have a decently-sized list of games to get at some point. Do you have recommendations for regular apps? I found your iphone iusethis page, but it doesn’t seem to be updated.

As it turns out, my list of non-gaming iPhone apps is considerably smaller than the mammoth gaming list, but those titles are worth mentioning too. Here they are, alphabetically: not all are currently installed on my phone due to space concerns, but these are the ones I’ve kept. Applications marked with an asterix are considered my critical application core, as they are on the first page of my Springboard. (Links all go to AppShopper.com; prices are accurate as of the time of this original post.)

So right after Christmas, we were roaming around the city. We stopped into Forbidden Planet and there, in the flesh, was a copy of Rogue Leaders, which I had on my Christmas list but was not purchased, largely because it was never given a proper release date. There was one copy left, and the price tag said $60. I picked it up to guard it as we continued around the store.

Something nagged at the back of my head. The iPhone comes out, Amazon Mobile starts up. Total cost with 2-day Prime shipping: $37.80.

I clicked Buy. I put the book back down, having just saved $25.

I have done fuck-all with it, but I am a sucker for music tools, and Beatmaker is fun to monkey with.

How can I not buy software from Brian Eno? I mean, it’s Brian Eno.

I was excited about Brightkite before the iPhone app came out. I’ve been using the app for nearly three months, and now I’m even more excited about it.

It’s mostly that the service is excellent, and continues to expand (Photo cross-posting to Flickr and Facebook integration have both come in the last month). But the iPhone app is icing on the cake: well designed, intuitive, and best of all, fully functional. I would wager that 90-95% of the functionality from the site is available in the iPhone app, which is impressive for a side built around so many different types of media. 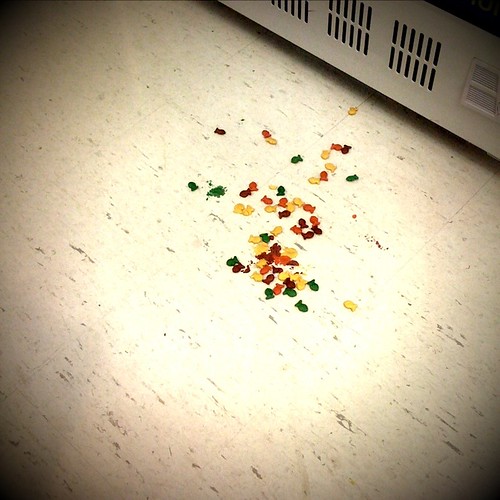 Who needs to post-process on a desktop? Okay, okay — most people. But CameraBag allows some great effects that make my cameraphone shots look, well, good. If you’re shooting a lot of photos, I really recommend this one. (Thanks, Merlin.)

I’ve been a user of the Delivery Status Dashboard widget since its inception; the iPhone version syncs all your delivery tracking back and forth. Not that I often have a ton of packages winging my way at once, but it’s handy to be able to track my Play-Asia packages from my phone.

One of the many reasons I have given up on most traditional social networks outside of Facebook is that no one has paid as much attention to mobile access as the Facebook team has. Before the app came out, Facebook had one of the best implemented iPhone-enhanced web sites; now, they have one of the best implemented iPhone applications. Quick to update, lots of context, and with most of the useful functions from the site, I may use the Facebook app more than I actually log into Facebook from my browser.

I have this installed for two reasons. The one that matters the most is that I can hold my phone up to my ear, say “Honky Tonk Badonkadonk”, and it translates it perfectly into a Google search for that very term. Truly, we live in an amazing time in humanity.

Also, it has an great implementation of hidden preferences.

I walk around the Shoprite with my cart in one hand and my iPhone in the other. Grocery iQ has two key features I need: a huge, auto-predictive database of items for quickly assembling a list, and a history/favorites feature for quickly re-adding common items. Spot on.

Yes, I bought this today. Yes, I proceeded to give a presentation with it. It did exactly what I wanted: acted as a workalike for Salling Clicker. I’ll keep it.

A really well polished Flickr client and uploader, with intelligent caching and an upload queue. It sure beats trying to email photos into my account, especially over wifi.

Formerly known as Box Office. I don’t need a lot out of a theater app – some sort of aggregate review score, showtimes, and synopsis. This does the trick.

This is a recent acquisition of mine, and I haven’t played with it too much, but everyone was raving about it. It’d be neat to learn how to play.

I use OmniFocus for work task tracking, so the iPhone version was a no-brainer. It is probably of limited use if you don’t own the desktop version of OmniFocus.

Sure, as a foodie, you might have Yelp, Urbanspoon, or the Frank Bruni recommended LocalEats. But those are all disposable, and you only need one app: the one that gets you reservations. And for that, all you need is OpenTable.

Remote.app is marginally useful if you have just iTunes. It becomes slightly more useful if your iTunes is hooked up to external speakers or AirTunes. But if you have an Apple TV, it becomes priceless. It completely replaces the interface for the Apple TV, entirely for the better.

As you may have guessed, I have an Apple TV, so I consider this app priceless.

Augmented reality is here. Taking inputs from your iPhone (microphone audio, motion detection, tilt sensors), audio is generated. Riding the train with this app on and some good noise canceling headphones is a unique experience. (There’s a trial version if you are unsold.)

I wish I could make an app like this for IIDX. Great score tracking for the Rock Band games, all in a self contained app.

A full featured e-reader that also lets you sync your own books over to it, or download from online repositories. Again: free. Take that, Kindle.

Twitter clients are the new command line text editors. Everyone has a favorite and are willing to argue at length as to why they’re the best. Sigh.

I was a religious Twinkle user for many months, but the speed of its refreshing started clashing with my hyperactive need to know what is going on RIGHT THIS SECOND. And when I had turned off the “nearby” functionality, I realized that not using the main portion of the app loses something.

Tweetie is much faster than Twinkle – it reloads frightening quick, even over EDGE. It could use some polish on the UI front, but it’s still a relatively new Twitter client, so I think it has some time to grow still.

A unit converter with a clean UI. Rarely used, but nice to have, I suppose.