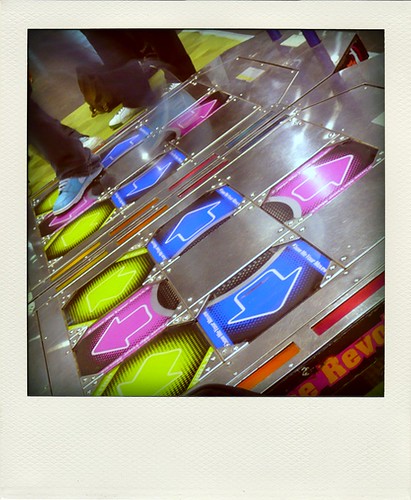 The story centers around a questionable alien dancer named Moonbeam Funk, who is spotted by two dance miscreants named Jacquise and Wiggles. Moonbeam’s dance moves are flamboyant, and on occasion resemble the act of dancing on a DDR pad. After seeing Moonbeam’s moves, they ask him where he got them – and he describes, in a song, about how there are talking, dancing crystals on his planet and they gave birth to him and his dance moves. He also explains that he has a fetus in a jar on his belt. Soon, they are stopped – dancing is illegal, of course – by a scottish cop who insists he is not a cyborg.

They form a revolution – a Dance Dance Revolution, as they refer to it. They are joined by a young boy who wants to learn how to dance (named “Small Child”), and his prostitute sister Trampoline Sally. There is some sort of love rhombus, with Moonbeam loving Jacquise, Wiggles loving Jacquise, Jacquise loving Trampoline Sally, and Small Child loving Wiggles. Or something. The movement gains members, and work on Moonbeam’s plan of “Gravity Shoes” which, despite the name, make you fly. Soon, they have a underground dance club, and just as Moonbeam is set to unleash his new dance move (the “Flaming Rooster”), the police come in and arrest a number of folks. Jacquise claims he is Moonbeam Funk, and is taken away in his stead.

The revolution loses steam. Moonbeam Funk leaves the movement, distraught over the turn of events with Jacquise. Wiggles takes the lead, leading the dancers into battle which they frequently lose in the face of clubs, knives, guns, and nipple clamps. Jacquise is tortured by the scottish cyborg cop, channels Tom Cruise, and then has his legs broken. Moonbeam Funk returns, kills Trampoline Sally during sex after performing the Flaming Rooster, and is called a fraud by Small Child who discovers his Gravity Shoes are merely Reebok Pumps. The police return, and jail everyone. Jacquise and Wiggles are nearly killed by the fellow prisoners, but are saved by Small Child.

In front of a tribunal, the dancers argue that they should be allowed to dance. The judge calls for a “level 9 catastrophic” dance-off; Jacquise (representing the rebels) must dance against Moonbeam Funk (representing the government) on trampolines. At first, Jacquise is disadvantaged due to his having non-functioning legs, but the ghost of Trampoline Sally gives him Dancer Juice, and he wins the competition.

Implausibly (the judge’s term, not mine), dancing is now legal again. The cyborg scottish cop happily removes his kilt. Wiggles agrees to finally teach Small Child how to dance. Moonbeam Funk returns to his home planet (using his Gravity Shoes) after giving Jacquise his fetus in a jar – which later grows into a daughter that looks remarkably like Trampoline Sally. The show ends with an older Jacquise describing Moonbeam Funk to his new daughter.

I can identify three things leading to my displeasure:

One, the theatre itself. While I understand space is at a premium in NYC, especially when it comes to arts performances, there are limits to space saving. I was seated in a chair that only had support for two legs, leaving me in a state where I felt like I would have fallen forward the entire show. That is, had I not had no legroom and been essentially wedged into my seat. MY view was largely obstructed not by the row in front of me but by the row two rows in front of me, which mysteriously seemed to be higher than the poor folks directly in front of me. While I would normally not blame the show for the seating, many of the seats were clearly added to allow for extra capacity.

Two, intentional camp. Don’t get me wrong: I love camp. But camp is a dangerous thing to knowingly trifle with, and requires walking a very thin line. Camp has to come naturally, to look (mostly) effortless.

Three, the music. To answer the most pressing question: yes, there were DDR songs in the musical. But they were the wrong ones.

I realize many of my readers are familiar with DDR or Bemani already, but for the sake of those that aren’t, treat the Bemani world as a microcosm of the real music industry. Konami is essentially the label, and musicians are hired to become part of their lineup. Artists become renown for their distinctive style. They have “hits”, collaborate with each other, and perform live. They release albums. Eventually, they may leave the label to pursue careers elsewhere in music.

For a video game to base a musical on, DDR is chock-full of aural paths around which you could craft a musical around. You could use the J-Pop cheese of BeForU. You could lean towards the hyper eurobeat nonsense that Naoki Maeda has made a living out of for 10 years, the sound traditionally most identified with DDR. Or perhaps the disco of good-cool, or the hardcore trance of TaQ, or the synthy riffs of Sota Fujimori. Even the dyslexic musical stylings of Slake could have made for an entertaining backdrop on which to make a dystopian musical.

All of these possibilities were passed over in favor of something far, far worse. 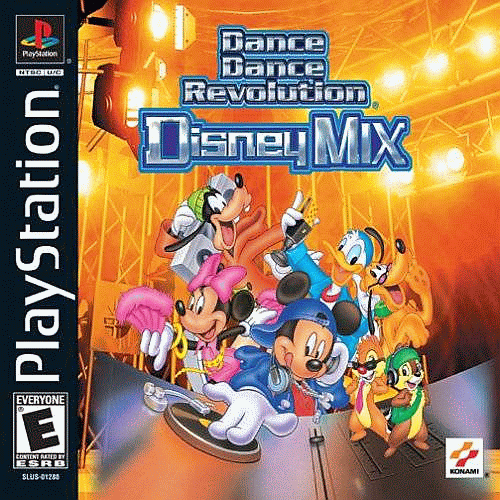 Originally released in the arcades in 2000, Disney Rave was a strange cross-over game that featured a number of remixed Disney standards, such as “Zip-A-Dee-Doo-Dah”, “Macho Duck”, “Mickey Mouse March”, “It’s A Small World”, and “Chim Chim Cher-ee”. It also included a very small handful of non-Disney songs, including the eurobeat standard “Night Of Fire”.

This is the representative music that was selected from the extremely large library of “DDR music”. (All of the songs mentioned in the last paragraph were used in the show, although “Night Of Fire” was cut short.) And while much of it is eurobeat – thus, cheesy – it sends the wrong signal to the audience. This is not crazy futuristic rave music; these are fucked up Disney tunes.

It affects the dance numbers. The dancers all stomp and clap in unison to the Mickey Mouse March, chanting “M I C! K E Y! M O U S E!” No attempt is made to explain the Disney connection, but we’re supposed to accept that this is the music of the year 2068.

This is what divorced my interest from the show – not the horrible bug catching jokes, not the crazy costumes, not the overpowering smoke machine, but music from a forgotten spinoff. My brain could not – still can not – reconcile this bizarre choice in music.

(In defense of the show: the original music written for the show wasn’t bad. I enjoyed the song “Shake Your Ass For Freedom” in the same way I enjoyed Team America’s “Freedom Isn’t Free”.)

Dance Dance Revolution is playing at the Ohio Theatre through December 20th. The entire run is already sold out, which means that even if my review hasn’t dissuaded you, you’re still shit out of luck.