I had three subsequent requests from friends to weigh in on the best value for Apple’s newly released laptops. Twitter ate my short thoughts, so I might as well lengthen it a bit.

Before I continue, I should note that a great place to always go is the Compare Models page on the Apple Store. It’s the best way to get a side by side comparison.

Ever since the iBook and Powerbook were retired in favor of the MacBook and the MacBookPro, I’ve held the belief that unless you’re in the specialty niches that require a specific feature on the MBP (the ExpressCard/34 slot for mobile broadband, for instance), 90% of consumers will be fine with the MacBook.

Nothing released today has changed that base level assertion. Not even the multi-touch track pads on the MBPs. 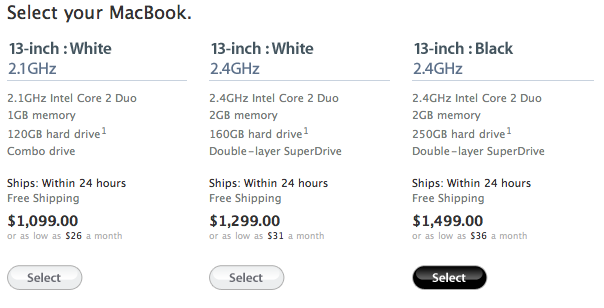 First things first: the BlackBook remains a $200 uptick for a different colored case and a 90GB increase on the hard drive. (You can get the hard drive upgrade separately on a white MB for $100.) The BlackBook’s market remains people who explicitly *want* a black notebook. If you’re looking to extend your dollars, there’s no reason to buy it.

Thus, we’re left looking at the other two models. I will call these “Low-End White” and “High-End White”.

If you take Low-End White and add the hard drive bump and the RAM bump found in High-End White, you come in $50 less than the list for the High-End White. So in that $50 you’re getting a decent clock bump (300 MHz) and a Superdrive – which makes High-End White the smarter choice here. 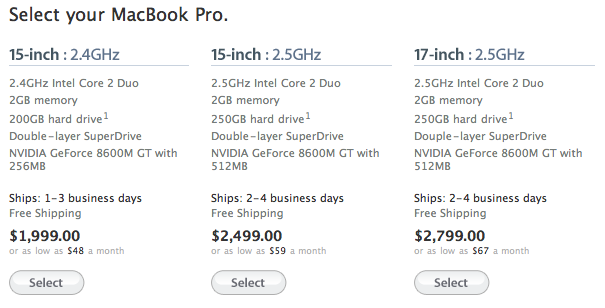 I am frequently baffled by Apple’s pricing, and here’s one of those instances.

Like the BlackBook, the 17″ MBP is for a certain breed of people who just *have* to have a 17″ display. People who merely want *a laptop* and not a *17″ bohemoth* – there’s no need. And frankly, I question their commitment to Sparklemotion.

So again, we’re looking at the two options, thus dubbed “2K” and “2.5K” solely based on price.

The hard drive bump can be duplicated for $50, so you’re looking at $450 for a tenth of a GHz, a bit of cache, and a significant bump on the VRAM. But keep in mind that the VRAM bump doesn’t provide higher resolutions on the display – it will likely only be useful if you’re playing Crysis under Boot Camp or doing some high end media work.

Thus, I must strongly recommend that if you need a MBP, the 2K model is more than good enough.