For much of the last week, the conversation with nearly everyone I know has been the same.

I need to let you folks in on a little secret that does not immediately appear to have anything to do with the iPhone: I hate the last week of June.

Everyone, in the course of their professional lives, will find at least one day a year that fills them with dread. This day is not a surprise or appear out of the blue, but instead telegraphed by the calendar. It can be a busy season like holidays (retail), the arrival of students (education), tax season (small businesses), the end of the calendar year, whatever.

For me, it’s the last week of June, because it is the end of the fiscal year.

A Crash Course In Fiscaliciousness

Many people hear the term “fiscal year” and correct identify it as something to do with money and time. The idea is simple: your budget extends for one year. The date where one budget year stops and the next one starts is called the (say it with me now) fiscal year end.

For companies that make money, the fiscal year end is when they have to close all their deals for the accounting year to make sure they can report it to the investors as a good year. (This happens on a quarterly basis, too – hence quarterly earnings reports – but the year end raises the stakes a bit.) For institutions that aren’t in the profit business – say, education – the stakes are different.

Our goal is not to make money, but instead to spend it. And not in some willy-nilly fashion: we have countless support contracts on both hardware and software that expire in time with the fiscal year end. We also have some new purchases that we try to do if there’s money left over in the budget.

Now Back To Your Regularly Scheduled Complaining

Why this sucks: It takes anywhere from five to nine people to get a purchase from merely a requisition to a purchase order. These people must act serially, not in parallel. They often have to talk to each other, or send each other documentation. The process traditionally takes five business days and is pretty low-key.

During fiscal year end, however, it is occasionally necessary to get this full process to happen, from start to finish, within an hour.
Now repeat that well-defined, multi-person process over one hundred times. In one week.

Oh, and we must not forget about the vendors. You can’t requisition something without a vendor giving you a quote – and many vendors are slammed this time of year, as it’s their end of quarter/year as well. So best of luck trying to get quotes revised and clarified. This also means that when they do call you, it’s to get the purchase orders because they need to book that revenue.

This was a sixty hour week with almost no downtime. No windows, no sunlight (working lunches only!), the familiar smell of whiteboard markers and my laptop, the eye-ruining grid of Excel. Endless context switching, drilling through an ever increasing pile of email, scribbling on white boards, learning how mainframes work.

“Dan, I thought you worked with, you know, computers. You’ve got a degree in computer science. Last I knew you were doing server administration and all that. What the hell are you doing?”

I will skip the elaborate description of how my job got this way. The short version: I seem to have a significant gift of keeping tabs on nearly everything our organization is doing. (I blame my NADD.) This is a blessing – everyone knows they can come to me and I’ll probably have the answer, if not a direction to point them in. This is a curse – everyone knows they can come to me.

I have been pegged with so many random projects over the last year in my current role that my self-appraisal could only be completed by scrubbing over all of my outgoing mail for the last year. “Oh yeah, I did that!” is never a fun thing to hear yourself say.

And so, since it appears that nearly everything falls under my purview, so too does the fiscal year end.

This is obviously not the first year I’ve gone through this, but it was the first year where I’ve had a major portion of the workload for it. As such, here are a few observations as to how to keep your head from falling off when faced with major time-limited projects.

(These observations may seem obvious or useless. I think I may be writing them down more for my own future reference.)

Back to the question I started with: was I going to camp out for an iPhone? Would I join the crowd of Apple faithful, early adopters, and media circus at 5th Avenue and 59th Street? Would I be first in line for what Steve Jobs described as “the most revolutionary and exciting product in Apple’s history”?

No, friends, I would not. There was work to be done, and you better believe I got it done. The fiscal year end waits for no product launch.

I got mine Saturday instead. 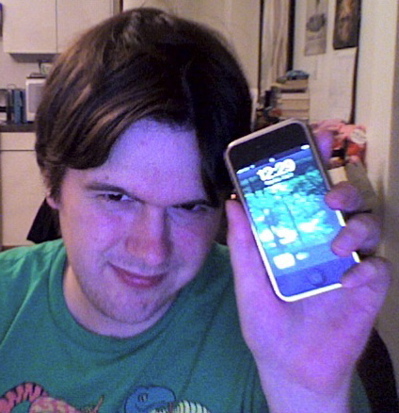