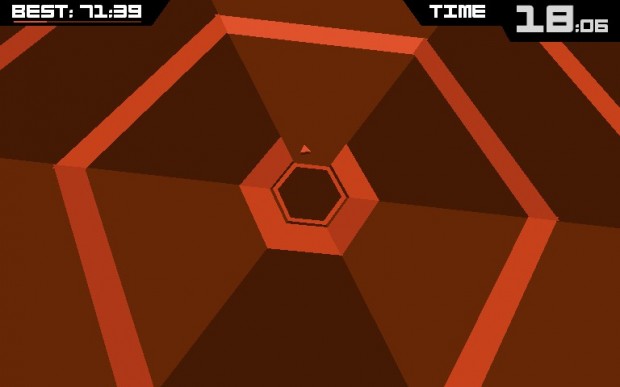 We were crammed three deep in the back of a taxi, feeling every mile and a half between our office locations. All I had on my mind was the upcoming meeting with the client – trying as one does to pre-plan my declarations and anticipating potential points of conflict.

One of my coworkers broke the silence: “Hey, Dan, random question – how did you get over 60 seconds in *Super Hexagon*?”

Terry Cavanagh’s Super Hexagon [is self-described](http://superhexagon.com/) as a “MINIMAL ACTION GAME”. Two buttons, no written instructions – you can rotate left; you can rotate right; hit a wall and the game ends. If football is a game of inches, then Super Hexagon is a game of milliseconds – the leaderboards are solely on the length of the your survival across 6 progressively ridiculous difficulty levels. To “beat” any given level and unlock a future one, you need to survive for one minute. This is generally perceived as impossible when you first pick up the game. When 10 seconds of survival is a struggle, asking for 60 seconds is tantamount to emotional abuse.

When I first downloaded Super Hexagon, I actively hated it – the somewhat imprecise controls, the randomness of the levels, and the spinning camera added up to leave me wondering if I had been pranked. Where was the brilliant game I had been promised? But Super Hexagon is not a prank – it just took a few days to realize that it demands patience and practice. Your skill evolves as you identify patterns, find ways to position yourself, and learn the cues as to when the rules of the game change a little. Jenn Frank’s voice will haunt you, insisting “BEGIN” every time you restart after death. (For the longest time, I swore she was saying “AGAIN”, which seemed more fitting.)

There’s a continuum of gaming as to how complicated the player’s thought process needs to be. On the higher end of the spectrum lives things like *Civilization*, *Dwarf Fortress*, and *Football Manager*. Super Hexagon lives on the other end of the scale, getting as close to a raw twitch/reaction game as anything I’ve played as of late. No upgrade system, no micro-transactions, no story, no Facebook integration.

In a industry where “retro” typically means “pixel graphics and bad jokes”, Super Hexagon does retro the right way – in its core, and not merely the exterior.

So, back to that cab.

I would’ve loved to explain all the strategy and nuance for how I finally broke the 60 second barrier. But the parts of my brain that became good at Super Hexagon weren’t easily put into words. And while I was still considering the work day ahead, I went for broke:

Internally, I was cringing as I pulled out my phone to start the game. The terrifying amount of bravado, combined with the fact that I had only ever done it once before, combined with the poor conditions of a crowded, bouncing NYC cab – there was no way this could possibly work as an answer to the question posed.

But somehow, it did. 69.24 seconds passed before I crashed into a wall. I couldn’t help but smile a little as I shrugged and said something along the lines of “So yeah, that’s how.”

That’s how I will remember Super Hexagon – it’s the one game that has ever made me look really, really good at video games.

Super Hexagon is available for iOS, OS X, and PC.