Twenty-something years ago, around my junior year of high school, I applied for an Independent Study project. The proposal: build a website for my school district.

That project was old enough that it predated archive.org, so I can’t even pull a screenshot out of the archives.  But a few times a week, I trudged along in assembling a website for the three schools in the district.

This was, strangely, not new work for me at the time: I was already holding a part-time job for the one web design firm in my tiny town. So roughing out a site structure, scanning photos via a SCSI flatbed scanner, hand-writing the HTML code and picking the right hex colors was a relatively familiar feeling.

The site launched at tburg.k12.ny.us, which was a particularly weird domain, even then. (In a weird bit of internet trivia, the hosting was provided by John R. Levine of “Internet for Dummies” fame, who not only lived in my town but later became the mayor.)

It wasn’t a particularly great site or deep site – you get what you pay for having an angsty teenager design your theoretically professional website – but it felt good to build an internet presence for the place I spent most of my time. 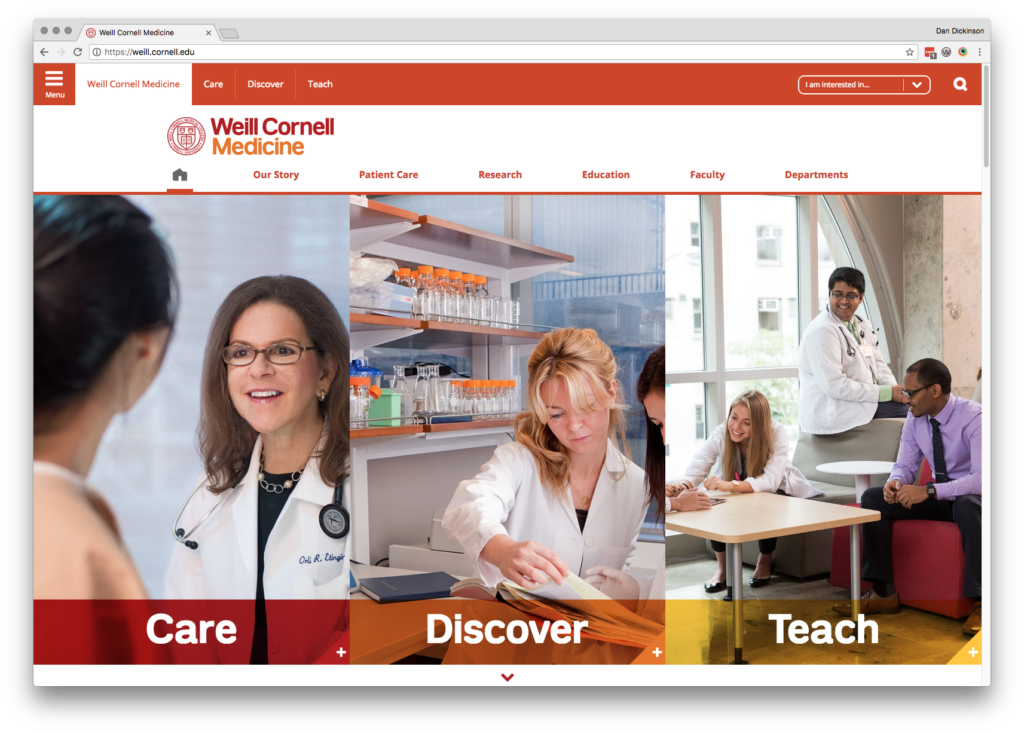 Today, after 13 months of work, 639 tickets, and more meetings than I can genuinely remember, we pulled the trigger on the relaunch of weill.cornell.edu.

Nothing about it is what would qualify as a marvel of modern web engineering. There’s no blockchain, no bespoke node.js content management system, no deep social integration at the cost of your personal data. It’s just a nice website that tells some important stories about a medical school. (I’m big on storytelling this year.)

I’m grateful to have had a great team working with me every day to pull this off, even when I’m spitballing new ideas late in the project.

I’m grateful to have management above me who trusted my vision and my approach, even when what I’m explaining is confusing and foreign.

And I’m grateful that I got the chance to leave my imprint, however temporal a website may be, on an institution like WCM.

There are few things harder to understand as a kid than having to uproot and move. Getting familiar with a new town, fitting in at a new school, making new friends – these things are hard enough when you’re an adult in control of the situation. As a kid who doesn’t quite yet understand how the world works, it erases nearly everything you knew and forces you to start over.

END_OF_DOCUMENT_TOKEN_TO_BE_REPLACED

Every morning on the train, I have a tendency to bury myself in something; over the last month, it’s been a Sudoku book I picked up from a local Japanese bookstore. I try to complete one puzzle from my home stop to the one I need to transfer at; this gives me about ten minutes. I also traditionally have my iPod on, thus making me a little ball of puzzle-solving isolationism.

As you might guess, this makes me completely oblivious to the world around me. As evidenced by the IM message I got about an hour after I got into work:

*”dandickinson is wearing a red shirt and doing su doku puzzles on the train.”*

Sure enough, [one of the bloggers I’m friendly with](http://www.sliceny.com/) had gotten on the train in Astoria, sat pretty much across from me with his girlfriend, and spent much of the ride debating whether or not they should say hi. They weighed against it, figuring I was in my “morning space”.

It would be safe to assume I will be considerably more alert on the subway from now on.

Later: my phone rings at my desk. It’s a vendor, one I’ve been trying to work a purchase through, but where the purchase process is stalled due to red tape and decision making. This isn’t the first time the vendor has called trying to check up, and I don’t blame them.
In the course of the conversation (which involved giving a very brief overview of why the purchase is taking so long), the vendor says:
“You know, I just visited campus a few months ago – I love that sidewalk in front of that one building, the one that makes noise if you step on it right?”

I ponder this quickly – there’s nothing like that at the Medical College; there’s not even much of a campus to visit. Did he mean the Ithaca campus? What on the Ithaca campus would be musical…oh yeah, the area around Olin Library. I respond, stating that we’re not in Ithaca although I had gone there for undergrad and knew what he was talking about. I also mentioned that I had lived in the area for about ten years besides that.

He continued: “Oh yeah? That’s cool…I was there visiting a friend, she lives in Trumansburg…”

At this point, I can literally feel the universe collapsing slightly. I point out that I, in fact, lived in Trumansburg.

He didn’t need to finish. Carmen? Sure, I remember her – and not just because she was two grades ahead of me and we had a couple classes together. No, it was because my very first job – just over ten years ago, now that I think about it – was working for her father, out of their house, at one of the very few web design places in the area.

I relay this, and then we had one of those magnificent pauses that come when you have such a coincidence naturally occur. He promised to say hi to her for me.

I smiled, promised to attempt to push the purchase through once more, and hung up.