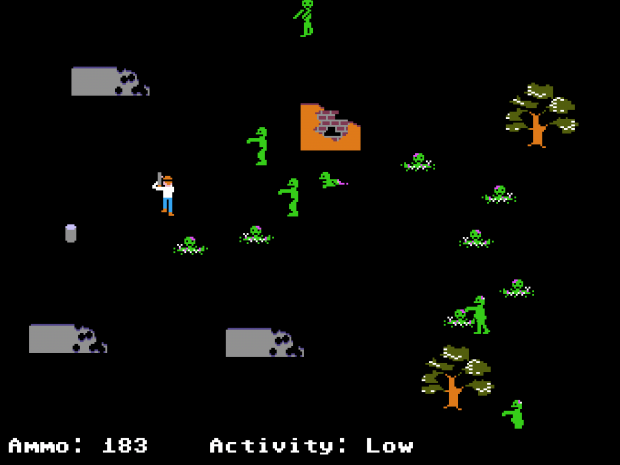 By this point in popular culture, we should all be fed up of zombies. We’ve been on zed-word overload for the past few years – not just in the gaming industry but in culture overall. Just this year alone we’ve had Lollipop Chainsaw, Resident Evil 6, ZombiU, The Walking Dead[1. An aside about The Walking Dead: yes, yes, I know it’s been praised to the high heavens. I’ve been a little gunshy about Telltale’s episodic games as I’ve bought 4 seasons of their stuff but tend to never follow through through on them. I’ll probably give it a whirl next month. Sorry?], DayZ, Deadlight, Into The Dead…even Call Of Duty seems to be perpetually infested with the damn things. I’ve grown a little tired of shooting them in the head.

But I have to hand it to The Men Who Wear Many Hats – they’ve somehow managed to find a way to break my zombie ennui by smashing shambling hordes into the nostalgic edutainment fun of Oregon Trail – giving us [Organ Trail](http://hatsproductions.com/organtrail.html).

Plenty of people have tried to get the tone of MECC’s Apple II era classic right, but attempts to modernize it generally feel off. Just look at [Gameloft’s mobile version](https://itunes.apple.com/us/app/the-oregon-trail/id307519882?mt=8), which was at least kind of okay until they added in-app currency and tried to squeeze people for further money. Organ Trail has no qualms about sticking to the chunky graphics and limited color palette that was a staple of late 80’s computer labs.

It’s that level of dedication to really nailing that feeling that makes me love Organ Trail – it’s not really the zombies. Some grew up on an NES, others on the Genesis. But my gaming life would start on an Atari 2600 and then transition to the 4-color, no-sound-card world of a basic DOS PC.

When you complete a minigame in Organ Trail – maybe a shootout with bandits or just scavenging for supplies – the result screen pops up with a cheerful but glitchy BLEEEP~!. And when you tap the screen to dismiss it, you get the sound of a key being pressed on a very chunky keyboard. The bleep and the chunk are the best reminder of my gaming childhood I’ve had in a long time. Hits me right in the nostalgia muscle.

Organ Trail is available a universal iOS app as well as a Flash game.