Tiger is now officially out, and around the world Apple users are experiencing what I can only dub as “Christmas in April”. A whole new OS, new updates for a ton of major OS-critical apps (J2SE 5.0! ARD 2.2! Server Tools 10.4! Quicktime 7! Xgrid 1.0!), new updates for most apps people use on a daily basis to either fix bugs in 10.4 (Transmit) or add new features (Quicksilver, Delicious Library).

Apple’s pushing hard on the 200 new features, and there’s a lot of shuffle right now to get lost in. But I’d like to focus our eyes on one little thing in particular: Quartz Composer.

> Use the advanced graphics capabilities of Mac OS X Tiger and the free developer tools to create your own screensaver module. Combine Core Image plug-ins with OpenGL, QuickTime and RSS to make dazzling effects which will amaze and delight your friends. Quartz Composer’s graphical interface requires no programming skills or tedious layout markup, though you will need to understand basic logic flow. Have fun!

If you have the developer tools installed (they’re on the DVD, right below the OS installer), you can find Quartz Composer in `/Developer/Applications/Graphics Tools/`. When you open it, try picking “Mac OS X Screen Saver”. Notice the little preview window? Congratulations, you’ve got a self contained screen saver just like that.

Quartz Composer works on a very easy-to-follow logic flow module. Items have inputs and outputs, and they plug into each other. Apple’s provided a lot of basic objects to build off of, and if you spend a few hours monkeying around with it and seeing what hooks together, you can leverage Core Image and build some seriously cool stuff without any programming. Like this: 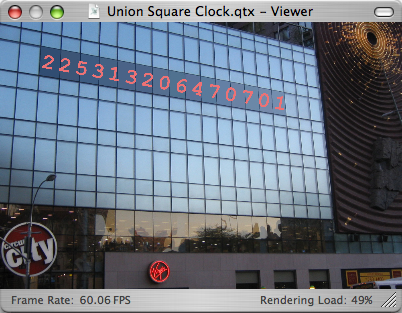 Yup, I’m that much of a NYC nerd, that I took an image I found on Google of the Union Square Clock, and with the logic listed in the Ask Gothamist article about said clock, built a Quartz Composer screen saver of the beloved and perplexing Union Square clock. It’s not flawless – I’m having a hard time getting the text positioning exactly right, especially since the Perspective Filter is a pain in the ass – but it’s close. You can download it here:

If you have 10.4 and Quartz Composer, you can download this and open it up to see the basic logic I used – I’ve even commented the damn thing so it’s easy to follow.

If you have 10.4 but are lazy or not interested, you can download it and dump it in your screensavers directory (`~/Library/ScreenSavers/`) and it’ll work just like any other screen saver.

I know the community is all aflutter over Spotlight, Dashboard, and Automator – one more amazingly cool app couldn’t hurt.