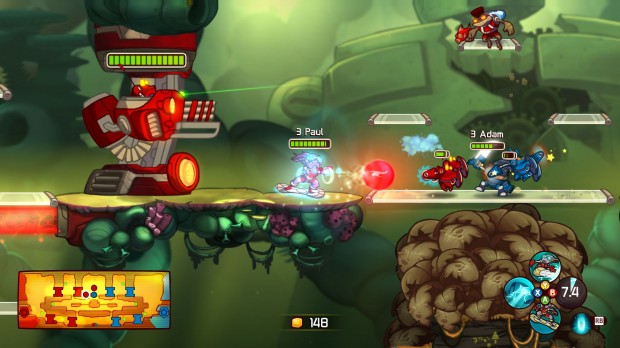 Attentive readers may have come to the conclusion that there is no genre of video games I won’t play. This is a mostly true statement. I will play just about everything – but for the handful of genres I am quite terrible at, I often try to limit my exposure to them. Buying a game that I’m unlikely to hit a basic level of competency in tends to feel like a waste of money.

One of those genres I’m terrible at are unit management strategy games. From real-team games like Starcraft II to more turn based experiences like Shogun II, I hit a panicked level of paralysis when it comes to micromanaging units on a battlefield. I’ve never once been able to get into Command & Conquer.

So when I discovered the genre of MOBA, I thought that I might have had a breakthrough. All the tension of a strategy game, but with only one main unit to worry about. I’d get to spend less time worrying about building structures and more time managing an inventory build. I deal with RPGs just fine – perhaps MOBAs would get me over the strategy game hump.

No such luck. I spent about six months with a light League of Legends addiction, but mostly stuck to playing against bots due to crippling fear of screwing up in a random lobby game. The DotA 2 beta destroyed my brain: the game already has hugely deep (and impermeable to newcomers) strategy, and I had to try and unlearn most of the things I knew from playing LoL.

But thankfully this year, my dream MOBA did arrive – in the form of a platformer called Awesomenauts.

A platformer MOBA seems perverse – I don’t believe it had been done before Awesomenauts – but it’s easy to see the parallels even with minimal experience on, say, LoL. Your goal is to destroy the enemy base; take out the enemy turrets in your lane to get there. Each character fits into a role – ranged, carry, melee, support, etc. There are minions that help you push along your lane. There’s a shop that sells upgrades to your abilities, and you can pick how you want that build to go. You can teleport home in a pinch. There’s a jungle area. Dying sucks.

One of the hurdles to getting into strategy games is that they’re all very serious ordeals – thankfully, Awesomenauts isn’t. Most MOBAs dig deep into an epic fantasy good/evil motif. Awesomenauts opens feeling like you’re watching a Saturday morning cartoon from the late 80’s.

Unlike most MOBAs which have been pushing F2P models, Awesomenauts does in fact cost money. While there are some additional DLC bits for extra skins, every actual piece of gameplay is in the game. You do have to earn experience to unlock most everything, but it doesn’t feel like grinding – I’ve generally been unlocking one new thing per game I play.

Whether you live and breathe MOBAs or you’re terrified of them (like me!), Awesomenauts is worth a look.

Awesomenauts is available on PSN, XBLA, and on Steam for PC and Mac. My experiences were split between the PS3 and PC versions.