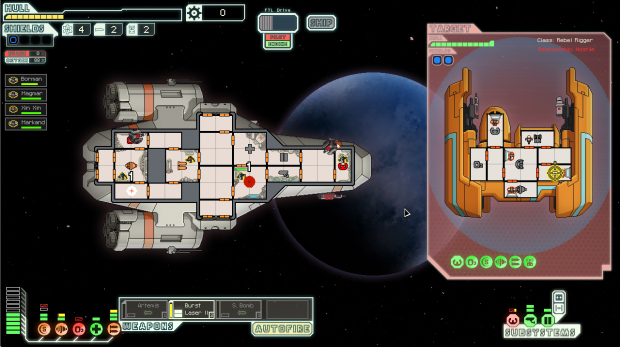 It’s hard to think of a bigger source of both hope and anguish for the gaming community this year than Kickstarter. The success of some high-profile crowdsourcing campaigns brought on a massive flood of projects, many of them with lofty aspirations and promises that seemed too good to be true.

I’ve been told by a few friends that I have a “Kickstarter problem”, as I’ve now backed 34 projects. 19 of these have been for video games. FTL: Faster Than Light was the fourth game I backed, and the first one to actually ship. (None of the three I backed before it have shipped yet.) With just one play, the game reenforced my faith in the power of the funding model. If even a handful of games this enjoyable could come out thanks to Kickstarter or IndieGogo, it’s worth the risk.

I have never had a great relationship with space games. I have tried time and time again, but whether it’s a dogfighter ala Wing Commander or 4X games like Masters of Orion, there’s something about them that makes a game clicking with me much more difficult.

FTL avoids falling into that trap because it’s not rooted to the way space games normally flow. The pitch from the developers told me it was going to be different:

FTL is a spaceship simulation roguelike-like. Its aim is to recreate the atmosphere of running a spaceship exploring the galaxy (like Firefly/Star Trek/BSG etc.) In any given episode of those classic shows, the captain is always yelling “Reroute power to shields!” or giving commands to the engineer now that their Warp Core is on fire. We wanted that experience, as opposed to the “dog fighting in space” that most videogames focus on. We wanted a game where we had to manage the crew, fix the engines, reroute power to shields, target the enemy life support, and then figure out how to repel the boarders that just transported over!

The roguelike elements are (as is the case with most roguelikes) both fun and frustrating. There’s a variety of randomness in the systems you explore, but there’s nothing worse than wandering into a battle that wipes out a carefully upgraded ship you’ve spent hours with.

The combat is fulfilling in ways that dogfighting is not. It’s tactical rather than reactive, less about looping circles behind ships and more about running your crew around to boost and repair the systems you need to win the fight. A wide array of upgrades and components mean you can customize the tactics to your taste. Maybe you want to use energy weapons to spare yourself having to stock missiles, or load up on drones, or use a teleporter to beam your crew over to the enemy ship and take it down from the inside. The flexibility helps convey that feeling that you’re commanding the ship.

There’s also pressure driving you forward, which is rare in space games. You’re being chased by rebels across the map, which keeps pushing you forward. While you get some time to explore, sticking around for too long will lead to your inevitable death. There’s no market system to pump your resources with buying low and selling high – you have to acquire money and parts largely through combat or interactions with other ships.

It really is a wonderful and unique experience, and one that provides a shining example for what Kickstarter can do for the gaming industry. Of course, out of the remaining 18 projects, 14 still haven’t shipped – so it’s a little discouraging to have so many projects sending me constant text updates but not having games in hand. Hopefully by this time next year, I’ll have more examples than just FTL.

FTL is available for OS X and Windows.