One of the things I’ve always loved about New York City is the balancing act between the routine and the unexpected. The smooth action of swiping a Metrocard, the jingle of the door at your local bodega, the timing of the lights at a familiar intersection – these mundane acts get balanced against the extraordinary circumstances and events that pop up somewhat regularly in the life of a New Yorker.

It is a balance, though – and too much of either can bring away at your sense of being. And for the last month, my personal scales have basically been knocked over, with uncommon circumstances eliminating much of the routine from my life for a solid month.

Hurricane Sandy came and went at the end of October – a stronger and more noticeable storm than Irene last year. Having lost power and water and being told it was going to be a week before there would be restoration, we nearly fled the area for shelter with Katie’s parents. But our instincts to give it one final night before fleeing turned out to be wise, as the power snapped back on at 3 AM, sparring us from trying to uproot on short notice.

While our building was spared, our neighborhood was not, with many of our friends being out a week. Worse, the PATH train – so vital to getting into and out of Manhattan – remained closed with no word for a solid week. When service was finally restored, the three stations I need service to were not on the list. While walking to a station with service is a tolerable hassle, a 10PM service termination has made regular evenings out impossible.

As the train started to get back into service, the Red Bulls post-season ended unceremoniously, giving up a goal with 5 minutes left to their biggest rival. This was not so much of a surprise – the team has fallen out of the playoffs at this point nearly every year. But having my well worked routine of sports journalism end abruptly was just one more pain point in a month that was already going south.

And then came the sickness. Two weeks to the day after the storm hit, I came down with a dry, painful cough that seemed like it would be easily shaken. It would not, of course, and I spent the majority of the week in bed, coughing every few minutes. In the second week it transformed into muscle aches and a night cough which deprived Katie of what little sleep she could get.

Monday will mark four weeks from the day Sandy hit, and it only now feels like the balance is being restored. The sickness is mostly cleared, enough that karaoke last night didn’t kill me. The PATH just announced our stations are opening on weekdays again, which is a start.

The routine is coming back, just in time for some big crazy events to keep life interesting. I can’t tell you how good it feels to have my regular life back. 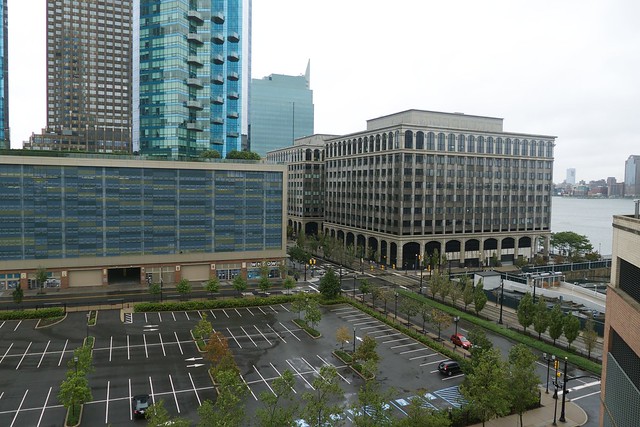 After all of the stress of yesterday, we woke up this morning and continued to stay cautious and weary until about 10AM, when the Irene was downgraded to a Tropical Storm. We went down to the 9th floor deck and then to the building lobby to survey.

Despite being in an evacuation zone and being literally on the coast of the Hudson, we found no flooding, no fallen trees or branches, no broken glass. We did not once lose power or cable service. The lobby of our building was undamaged.

Yet the more inland parts of Jersey City – not under an evacuation order – suffered widespread flooding and power outages.

There are things in life that perplex me, and this is certainly one of them. I am not going to sit here and call the storm “boring” or “overrated” because it has impacted plenty of people. As I write this, PSE&G says 375k are without power in NJ, and I know more than a few. But how a riverfront area can avoid any damage flies in the face of my internal logic.

In any case, I’m glad it’s done and over with. But now I very badly need a vacation, or a massage, or *something*.

I’ve received some frantic IMs and tweets from friends over the last few days about what we’re going to do about the hurricane. Allow me to document our decision making process:

At 1PM today, the Jersey City Police Department issued a mandatory evacuation for ground/first floor units in our neighborhood. We live on the 10th floor of our building – the first eight floors are a block-wide parking garage and common space for the building, then two separate towers start the actual units at floor 9.

At 3PM today, our building forwarded that order on trying to turn it into a mandatory evacuation for the entire building. They requested everyone vacate by 4PM.

There are emergency shelters, of course, but they are neither near us nor are the buses they are running for them anywhere near us (4 stops on the light rail). Additionally the shelters are not taking pets, and Buttons’ safety and health remains one of our top concerns. (One was just announced as taking pets, opening at 5PM today – a bit late.)

Additionally, like many NYC-area residents, we don’t own a car. So driving west to some unknown destination (we don’t have any friends or family in NW New Jersey) isn’t an option.

The fear from the building (and generally from the area) is more about the flooding and potential power outages than wind damage to the building. Our windows are thick and, per the building, able to withstand high winds. (Jersey City is remarkably windy on average.) We have supplies – water, canned food, charged devices – that we prepared yesterday.

So I would emotionally prefer to have somewhere safe we could go and relax for the weekend – my stress level has been a bit high, having recently completed a week long conference that involved an earthquake. But the logical, rational side of me knows that trying to flee at this point is a losing proposition compared to sheltering-at-home.

So at home we shall stay, for better or for worse. It is not a great decision, it may not even end up being a good decision, but it is the best decision we can make given the options. And to be honest, if the primary disruption that comes from this is a blackout, I think I have ample experience.