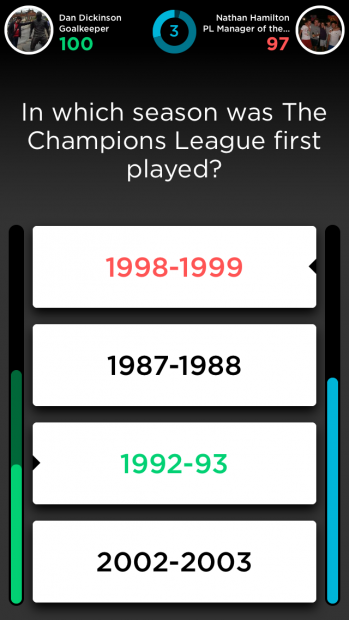 We were piled in a rental car today, making the lengthy journey from New York City to Ithaca for a work trip. The miles started to drag across Route 17 as the afternoon wore on.

One member of my team, wondered aloud: “Man, I wish we had a multiplayer game or something.”

I didn’t need to pause to think of a good option – I spat out QuizUp almost immediately.

It is a weird sort of situation that while mobile platforms are becoming increasingly known for social gaming, it’s become less about direct gameplay with a small group of others, and more about nebulous MMO-like elements in whatever the latest Farmville clone is.

QuizUp is a very cleanly designed two-player quiz game. Seven questions, all multiple choice, with response time determining the points awarded. Get more points, win the match. It has a very well-maintained layer of polish (the animations), clever little addictive nudges (a per-category experience system), and generally works very well, even over a cellular connection.

The only place QuizUp needs improvement is in integrating existing friends back into the game’s friends system, where it occasionally struggles to understand that I shouldn’t have to invite someone I’m already GameCenter friends with to play.

Small concern aside, it’s the best the trivia game I’ve played in a while, and perfect for long rides in the back of the car. Check it out.

QuizUp is available for free on the App Store. An Android version is planned.