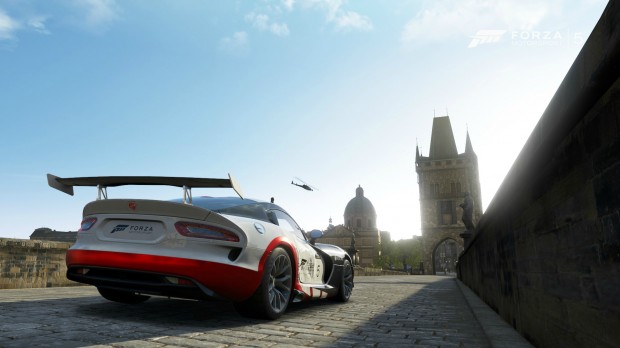 Because of the breadth of games that I like to play, I am understandably tolerant for different models for purchase. Whether the game is $60 or $1, whether there’s downloadable content or in-app purchases or subscription fees, I try to be mindful of why such systems might have been implemented and not immediately rage out that there’s an occasional prompt to buy something with real world money.

But even I have limits. Tonight’s game, Microsoft’s Forza Motorsport 5, is easily the most egregious monetization scheme I’ve seen on a console platform to date, to the point where I have to include in this list solely as a warning to others.

I defer to Eurogamer’s explanation in their review, emphasis mine:

> All that’s left is the grind, and it’s not a particularly pleasant one. Unlike previous outings, cars don’t unlock upon leveling up. Everything must be bought in Forza Motorsport 5, and all transactions take place in a slightly misshapen economy. **A series will, on average, net the player in excess of 110,000 credits for just under an hour’s effort – but with some of the premium racecars costing well over a million, it’s a somewhat brutal grind.** Good job, then, that there are tokens purchasable on the Xbox One’s marketplace for you to attain the car you’re after, or to temporarily boost the rate at which you gain XP. When you’ve already paid £429.99 for a new console, £44.99 for the game and maybe even £349.99 for the only steering wheel that the game supports at launch, such tricks appear a little unsavory, and in Forza 5, mechanics greedily smuggled from free-to-play games trample over the elegant RPG elements the series once embraced so effectively.

Couple this with a lengthy schedule of planned DLC, that costs real money but somehow doesn’t unlock the assets into your garage for you. You are paying money for the “right” to grind the economy to unlock the cars.

Now add into this that Forza 5 costs $60. It is not a free-to-play title; it’s full retail.

Again, I don’t mind creative monetization schemes. But I do mind terrible ones. And Forza 5’s is pretty damn terrible.

Forza Motorsport 5 is available for the Xbox One.