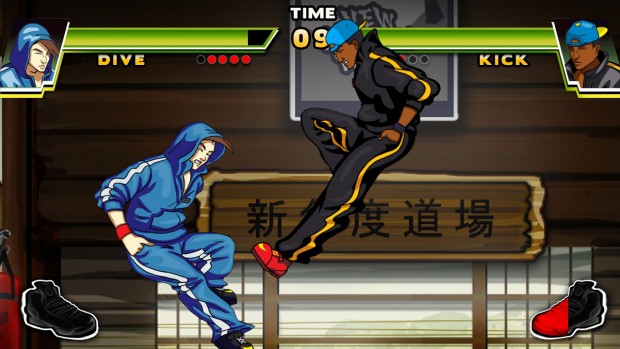 In the twenty years that fighting games have been a integral part of the gaming landscape, I’ve learned one very important thing: I’m terrible at them.

It’s not for the lack of trying. the Street Fighters, the Mortal Kombats, the Samurai Showdowns, the Tekkens, the Soul Caliburs, the Brand X vs. Brand Y, Guilty Gear, Virtua Fighter, King of Fighters, Dead Or Alive…I’ve tried them all. I love the pure competition of fighting games, but I just don’t have the precision muscle memory (or countless hours to burn) to really excel.

Enter Divekick. Strip everything you know about fighting games and reduce it to two buttons: Dive, and Kick. (There’s no joystick.) First hit wins the round. First to five rounds wins the match.

In that simplicity, the genre boils down to something very pure, endless psych outs and feints. There’s still special moves and meters, sure, but without solid diving/kicking technique, you’re going to set off the fraud detection.

Some intentionally goofy characters and story lines round out what many ruled as a “joke game”. And while there wasn’t a ton of competition in 2013, it’s easily the best fighting game of the year.

Divekick is available for PS3, PS Vita, and PC. I spent time with all three versions.