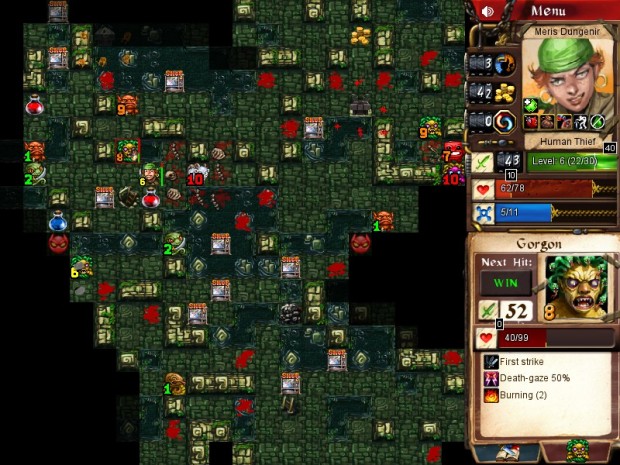 In 2010, a little three man team in South Africa released an experimental roguelike RPG called Desktop Dungeons. It was meant to be consumed in short bursts: the games didn’t last longer than 5-10 minutes and there wasn’t any deep character progression.

A brief stab at how the rules work: you are a level 1 hero. Walking into an area of the map that’s unrevealed reveals the tiles, which can heal you. Monsters will be shown with a level, and the game clearly telegraphs what will happen if you attack (WIN/SAFE/DEATH being the three most common states). Beating up monsters gets you experience, which can help you level; beating monsters above your level is riskier but yields more experience. Your goal: kill the level 10 monster somewhere on the floor. There’s more to it than this, but that’s the crux.

Now, in 2013, the “final” version has finally been unleashed on the world. The core gameplay is still the same, but much like when Triple Town jumped from a straightforward iOS puzzle into a desktop version with some meta-game elements, so too has Desktop Dungeons. There’s a deep series of unlocks that bring you more classes, better start states, and differing environments.

I was going to say I love Desktop Dungeons because at its core it’s a beautifully stripped down RPG experience. Then I realized it may be unfair to call it an RPG – it’s a puzzle game that looks like an RPG. And while most game modes don’t run on into infinity, there is a familiar impending doom that you might get yourself stuck, with no good options but to crash your run and start over.

And having just compared it to Triple Town, I can’t help but realize that this is essentially my Triple Town of 2013. It’s that same addictive bite sized game that requires a level of strategy and critical thinking. Despite it being short, you can lose hours to it.

Desktop Dungeons is available on Mac and PC. I played both versions evenly.