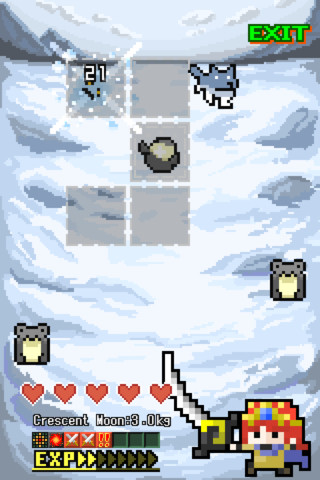 The genre of the RPG is in an odd state these days. As someone who grew up with 60+ hour slogs through SNES era Final Fantasy games, I know these games are becoming less and less frequent. With mobile platforms on the ascendancy, casual RPGs are becoming more frequent, but many get bogged down with freemium mechanics. So that balance – an RPG with some length and depth, that fits into current platforms without indulging in the more anti-consumer practices – is a tough one to strike.

The closest I’ve found (and it’s by no means perfect) is Battrix Floating Continent. Done by Opus Studio, who brought the world another great RPG twist with Half Minute Hero, Battrix starts with you having just a single square on an expansive world map. To claim a new tile of the map, you fight off monsters in a tap-focused battle system. Towns get discovered, mechanics get mixed up, weapons level up and get upgraded, and eventually the map starts to pull itself together. It’s like any other RPG, just…mobile, I suppose.

It became my perfect subway commute game for a good chunk of the year, and anything I can sink an hour into every morning for a solid month is worth mentioning in this series. RPG fans might want to poke at this one a bit.

Battrix Floating Continent is available for iOS for free.