Despite constantly getting burned by poorly launched hardware – hello, 3DS! – I made the decision to pre-order a PS Vita (Wifi) about a month ago. I’ve spent a good chunk of my free time since it was released on Wednesday playing it. Some assorted thoughts are below.

END_OF_DOCUMENT_TOKEN_TO_BE_REPLACED

A year ago today, I completed my most ambitious coding goal of my life – VJ Army. I had turned what was originally a single user score tracking script into a multi-user, competitive score site. It was (and still is) rather rough around the edges, but it certainly worked.

Since then, I have been pleasantly surprised again and again by what the site has become. I find myself fortunate on two fronts:

I’m shocked at how easily I’ve made my code adaptable and open to change. Yes, it’s rather messy to look at, but I really lucked out with much of the initial database design, the flexibility of the code, and a few of the algorithms I ended up writing make me look back and wonder what I had done that day to come up with such inspired coding. (There have also admittedly been portions of code where I wondered what I was smoking.) The code was adaptable enough that I could adapt it into another score site – for Pop’n Music – with minimal work.

But more shocking is how the site has restored my hope.

Understand the following: I’ve been in the Bemani community since the end of 2001. In the just over two years between when I started playing DDR and when I launched VJ Army, I had grown incredibly jaded and hateful of anyone who played music games. The drama, the flaming, the reputations that some sites had versus others…it was hellish, beyond anything I had dealt with in a gaming community before.

I had picked up Beatmania IIDX in early 2003 because I wanted to get away from the DDR players. IIDX at home can be a hugely isolating game, and at the time, it was just what I needed. The community at the time was – no offense to those involved, and I certainly joined this at times – a bunch of elitist assholes.

When I got requests from friends (John Stiles and Ryan Madeksho are the two most responsible for the requests) to make a multi-user site, I coded it with some trepidation. My fears that the site would turn into a massive penis-waving competition made me wonder over and over if I was doing the right thing.

I’m so very happy I was wrong. We’re currently 1,063 users strong – not all active, but far beyond what I expected to see. Over 25% of these are on the forums, which are amazingly trouble free and surprisingly useful.

And while all this was going on, something amazing happened in Japan. There had been a nearly two year hiatus of IIDX home releases – 9th Style had been released, and we were still playing 6th at home. But as the community started to rally, Konami started to listen. In the span of one year, we will have had three home releases, spanning from 7th Style to 9th Style. Konami has once again gotten serious about IIDX at home, and while I know it’s really not the case, I’d like to think we all had something to do with it.

Before I get to indivdual people I’d like to thank, I want to thank the user base as a whole:

If you’ve ever posted a score, thank you. You’ve helped to make the site what it is.

If you’ve ever posted a bug report, thank you. Without you, I’d never catch the holes in my code and never be able to catch them all myself.

If you’ve ever posted a feature request – even if I rejected it – thank you. The passion you all have to make the site grow is unbelievable.

If you’ve ever PMed me, or emailed me, or even IMed me just to thank me for the site, thank you. I really do appreciate it, and it keeps me going.

If you’ve ever bought something from the VJ Army store, thank you. You’ve helped to keep my gaming addiction in check, and my wallet (and my wife) thank you just as much as I do.

If you’ve ever referred a friend, or said kind things in public about VJA, thank you. This site couldn’t thrive without word of mouth.

To John “mafiaboss” Stiles – thank you for kicking my ass about the features. You’re always spot on with your requests, you’ve more than helped out with the coding (percentile sort, live grade adjustment), and it’s always a pleasure to watch your progress, even if it means you’ve passed my skill level in far less time. Cheers, my friend.

To Ryan “ryan2dx” Madeksho – you are truly a fantastic IIDX player, and without your help collecting note counts and difficulties, I couldn’t have the site as ready for each home release. Thank you for driving me to get the site built in the first place. …./

To Aaron “rmz” Ramsey – you are incredibly helpful between bug reports, helping out on the forums, and keeping people in check so I don’t have to repeat myself quite so much. I’m very happy to have you around.

To Malcolm “Reo” Cuffie – if I couldn’t bounce ideas off of you, I don’t know what I’d do. Thanks for listening.

To Random and Ransai – I know this isn’t related to VJA, but thanks for trusting me and believing in my coding. I promise, there’s still more to come.

To my wife, Katie – thank you for putting up with my shit. For those of you who don’t know, I frequently end up coding and managing the database at strange hours, and she tolerates it with the patience of a saint. Without her understanding and support, I sure as hell wouldn’t have the opportunity to work on the site as much as I have.

To Paul Kehrer – your donations of time, server space, bandwidth, and understanding are immeasurable. Thank you so goddamn much. gg sir.

Before I get onto the meat of the goodies today, here’s some fun with numbers.

Over the first year, VJ Army has received:

Here’s to having another great year of IIDX.

Even changing your payment plan is worthy of a procession in World Of Warcraft: 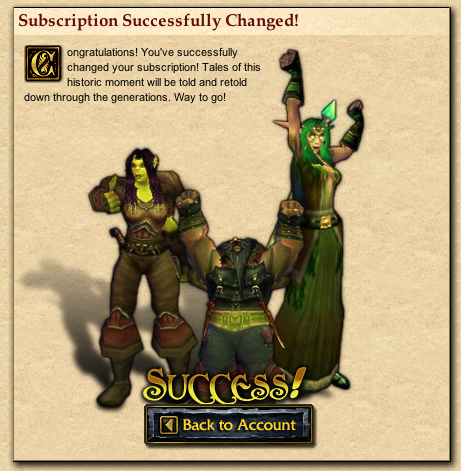