Today, Thierry Henry announced he would not be returning to the New York Red Bulls following the expiration of his contract. The move was not a surprise, but still has left many that surround the team a bit down.

So much ink has already been spilled about the legacy of the last four years: his talent on the field, his role with the club, his impact on MLS. He’s been an anchor since I returned to caring about the league in 2010, someone that I couldn’t believe I got to watch perform week in and week out.

But as I’m writing this on my personal site, I want to reflect on the other lasting mark Henry has left on me: he was the rare player that demanded more out of everyone involved with the team, including the media.

If you follow league beat reporters, particularly those who deal with RBNY routinely, you’re aware of his reputation when dealing with the media in the locker room. Some would label him “cranky”. Some declared him “rude”. An incident where he declined media availability after a 1-1 draw against Chivas USA in 2012 sparked a brief dust-up between media and supporters about whether or not beats had any right to speak to players at all. 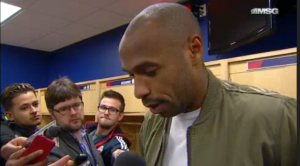 I won’t claim to “know” Henry from my three years of sticking a microphone towards his face, but I at least grew to have an understanding of him.

Thierry didn’t relish dealing with the media hovering around his locker, but he accepted it. (European locker rooms aren’t open to media, but MLS mandates the doors open 15 minutes after the match ends.) He was typically the last player to speak after a match, sometimes waiting a solid hour after the final whistle, which triggered its fair share of pissed off “You’re waiting HOW LONG?” text messages from soccer media widows. But Henry always seemed to have a level of professional respect for those of us who did stick around.

Thierry had his cliches – “as I said to you before”, “I don’t know if you remember”, and “not having a go at any one” being the three go-to for any Henry impersonation – but he genuinely considered every question. I can’t remember him being on auto-pilot or content with performances – he always latched on to something the team could improve on. If the team did badly, he was open about it. If the team won 4-1, he would complain about the conceded goal. If the team won 4-0, he would caution about celebrating too much, because he knew it wouldn’t be long before the team regressed.

His knowledge of the game was impossibly deep. He would run down talent on opposing rosters not that they had just faced, but that were coming up. He would commend systems and coaches elsewhere in MLS. He would frequently drop analogies involving NBA teams, the other sport he truly loved.

Following a recent home game, as he was getting ready at his locker, I watched him look up at the closed circuit TV, that was showing the annual NYPD vs. FDNY match. And he watched it just long enough, and gestured at the TV, that I could’ve swore he was analyzing the match.

Nearly as much as he loved challenging defenders on the field, he took a deep pleasure in challenging dumb or trite questions.

Do you enjoy the new away jersey the club just released? “I don’t know, I haven’t worn it yet.”

An intricate question about his position moving wide left as he used to at Arsenal? Gets swatted down because he insists he didn’t play there at Arsenal.

My own personal dressing down (which I was surprised to find I still had the audio for) came after a softball about what he had seen from the reserves during a friendly he didn’t play in. He had often loved talking up the younger players who didn’t get a lot of field time, but apparently not as much as he loved giving me crap about trying to gain insight from a friendly:

What Thierry taught me, more than anyone else in the RBNY locker room, is the value of asking a question with a non-obvious answer. You can’t lose the germane questions entirely to get an interview rolling, but unless there’s something I can’t answer in my head, I’ve learned to just listen.

Perhaps the most noticeable thing in his final year with the club was how focused he was on the team, and not himself. As the “What are you doing next year?” questions came up nearly every week, his answer was always the same: “We’ll talk about that after the season ends.” Even in the announcement today, the thought was the same: he didn’t want to take the focus off the team’s performance. He didn’t want a farewell tour, teams bringing him gifts, endless fawning media tributes. He wanted to put his head down and be one of the eleven guys on the field.

There was an article in the club’s corporate magazine that had perhaps my favorite quote that wrapped up how he saw himself:

I keep on reiterating to everybody, I didn’t save anyone’s life, I’m not a hero, I’m none of those things. I was just out there to play the game and while I understand I gave some people joy and I ended up loving the club I played for most of my career, I didn’t go to war to protect my country. That’s worthy of elevation to the status of ‘hero’, you know? I just want people to remember me for playing some soccer and that’s all. Another player will come along and erase all those records but as long as people can recall me in some way it means that I’ve done something right.

Thanks, Thierry. It’s been a pleasure.