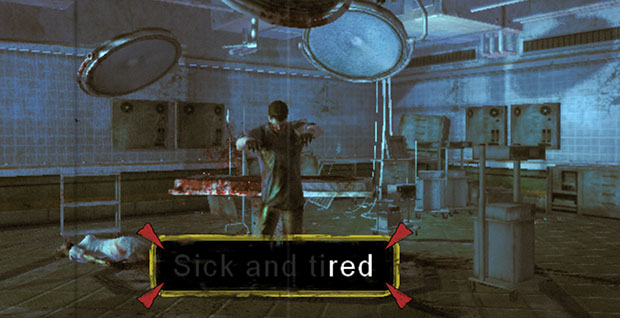 When I was in the 4th grade, I was subjected to my first school class that included typing lessons. This was the golden age of software that taught people how to type, when Mavis Beacon was queen. Our instructor, who’s name I’ve long since forgotten, put us all in front of whatever piece of software it was and told us to get to work, promising a week of free school lunch if anyone could break 72 words per minute.

It may have been the first time in my life I ever smirked when I called him over and showed him an 85 WPM on the drill. And boy, did those free lunches taste *good*.

That was 20 years ago; I still type at a ridiculous speed, but that era of typing tools long since dried up.

But this year saw the remarkable release of Sega’s The Typing Of The Dead: Overkill. The sequel to the original Typing Of The Dead – a game that married a light gun zombie game with a typing tutor – was literally a surprise release: no one knew it was in development, let alone that it was coming out. (As it turned out, it had survived an apocalypse of its own.)

This time, the foul-mouthed grindhouse-tinged HOTD reboot from a few years back is shoehorned onto fast typing action. Type a phrase (“SICK AND TIRED”), take down a zombie. That grindhouse style – where F-bombs and poor innuendos are dropped nearly every sentence during cut scenes – is not for everyone, and it does wear thin. Kill Screen declared it to be “either a surrealist masterpiece or absolute garbage“.

But to have a modern game where my somewhat absurd typing ability directly converts into gaming expertise? I’ll take it.

The Typing Of The Dead: Overkill is available for the PC.