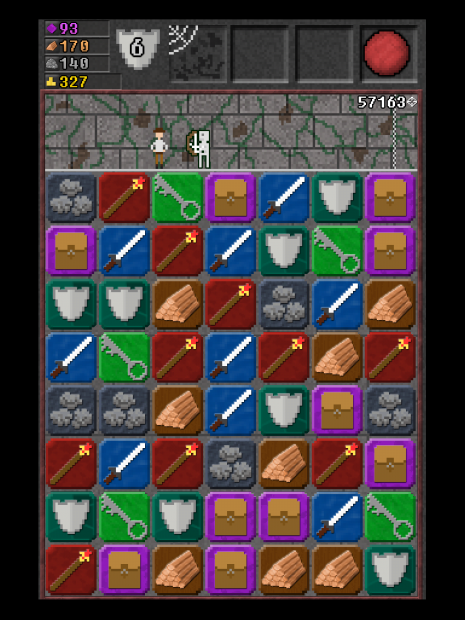 If there’s anything I dislike about EightyEight Games’ 10000000, it’s the name. It’s certainly relevant to the game – hit that point total and you win the game – but trying to spot check the number of zeros when recommending it to friends gets tiring. So I’m just going to refer to it as *10M* from here on out.

The game itself is an addictive little tile matcher infused with upgrade mechanics. Rather than swapping nearby tiles, you slide entire rows in the hopes of matching three or more. You’ll battle monsters, open treasure chests, and bust through doors in a battle against time. Between runs, you can upgrade your hideout, unlock perks, and boost your stats with resources you collect.

As an aside about upgrade games: this has been a relatively recent genre, typically accompanied by some sort of “fling something into the air” mechanic. I have an unfortunate soft spot for these games, but I grow tired of the randomness when the fling mechanic is used. I like seeing those mechanics tied to other genres, and I think 10M does it in a sensible way.

10M is not a deep game, nor is it a long one. But it’s an enjoyable couple of hours of grinding and reacting, trying valiantly to get the little counter that reads “FREEDOM” to click up to 8 digits.