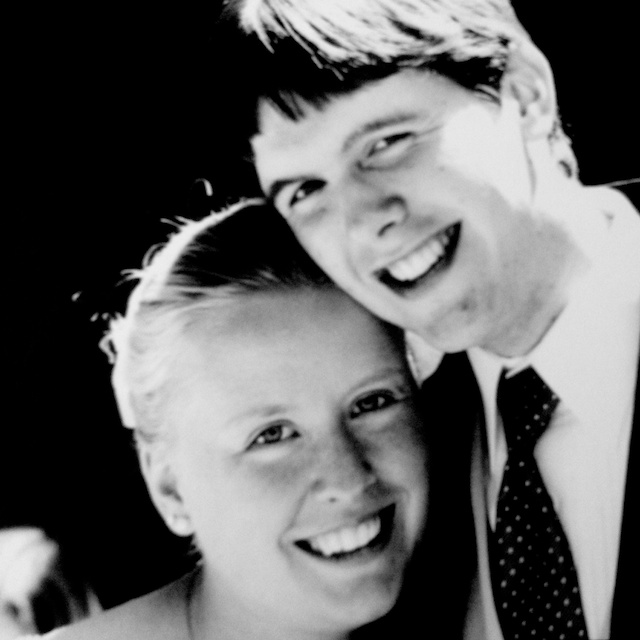 Ten years ago today, I married the love of my life. Reflection, anecdotes, and more old pictures of the two of us inside.

The Pain Of Being Time Obsessed 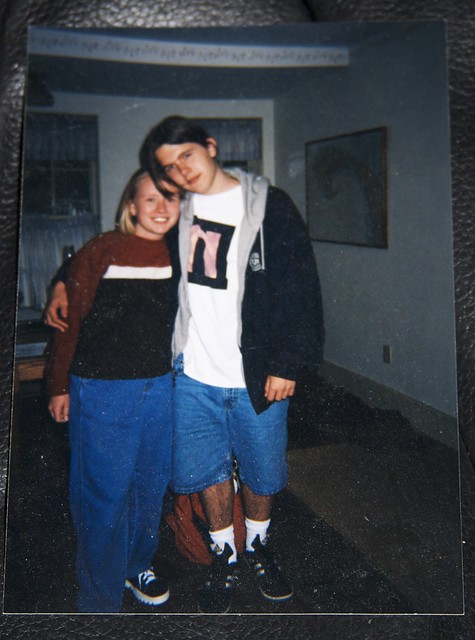 I have always had a certain level of obsession with time. It may or may not have been instilled in me by my father, who would constant quiz us (to much protest) at the dinner table about what had happened on some arbitrary date. “And where we were six months ago today?” he would ask, knowing my sister and I would only groan and roll our eyes. After some half-hearted guesses, he’d remind us of some specific vacation spot or minor life event. It was torture, but it apparently had an impression. [1. It’s worth noting that my Dad recently became a Foursquare addict, mirroring my meticulous record keeping of locations. Like son, like father.]

Back in the early part of last decade, I had a page cobbled together out of some PHP where it would automatically calculate what percentage of my life various things had gone on for. How long had I been in school? How long had I gone since last overhauling my web site? And how much of my life had been spent in what I hilariously labeled as a “real-life relationship with Katie”? (So glad I felt the need to clarified *that* one.)

This blog, while it does not get as much love as it used to, is a constant record and reflection of that obsession. Whenever I write longform – be it about my life, my hobbies, previous employers, travel, or otherwise – it is usually through the context of time. Those posts then become marks on my personal calendar, stretching back in time to be the primary document of my life.

Tragically, across the multiple years of data loss and migration between blog software, there’s a large gap in my archives from mid-July to late August of 2002. Despite the fact that most of my old posts are embarrassing to read through, I had hoped there was at least something about such a major life event as our wedding. And I was convinced that there wasn’t – that maybe I had just been so busy with the wedding and the honeymoon that I never got around to it.

Turns out, I did write something. After digging around in the Wayback machine, I did find a portion of a post labeled “The Fantastical Wedding Report”. But since archive.org didn’t capture every last page in my then-Drupal install, all I found was the intro, written on an evening I was crashing on a couch in NYC on a business trip for Freeverse. And while I’m sure the rest of the post was glowing, I can only cringe at what is left of the post:

Alright, I think it’s time I finally got my act together and wrote up the whole big wedding experience. I certainly don’t have anything better to do for the next hour.

As a bit of background, things had been extremely tense in Maryland for the two months before the wedding. Anytime anything would deviate from the original course, it turned into a massive war. Thus, the discovery that we had neglected to count ourselves and our parents in the head count caused a massive rift…these things were not going well.

That’s it. That’s all I have left on the internet about what my wedding was like. And that, for someone who loves to look back at archives of what I wrote and what I was feeling, is a terrible thing.

In full fairness to my 22-year-old self: that excerpt *is* true. Wedding planning was rough. In retrospect, it was certifiably insane to try to plan a wedding in the conditions we were under (in college, no jobs, long distance, et cetera). It was a wonder it happened at all – but it did.

And it was pretty damn amazing. 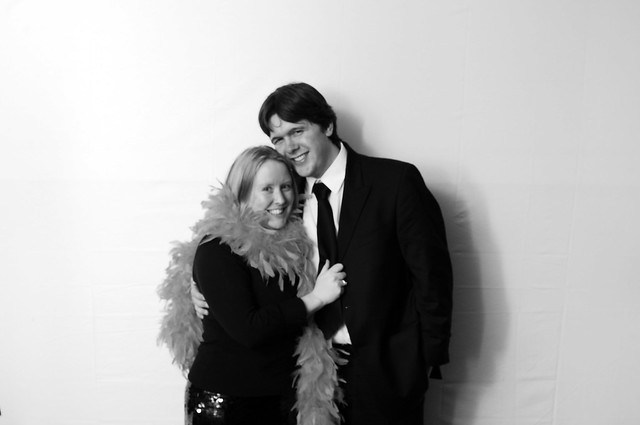 Because we got married relatively close to the completion of college, ten years of marriage becomes a pretty clear dividing line between childhood and adulthood. So for as long as I’ve identified as being an adult, Katie has been right there beside me. She is inseparable in my mind from the life we’ve made together. This is a lovely feeling but also means I can’t really remember life without her. Not what I would call a terrible affliction, but an interesting one to consider.

This does also mean I avoided some things many of my friends have had to deal with. I entirely skipped the dating scene in college and after. I never got to try to live on my own. I have missed out on the NYC tradition of trying to convert strangers into roommates.

All considered, I’m pretty okay with this. 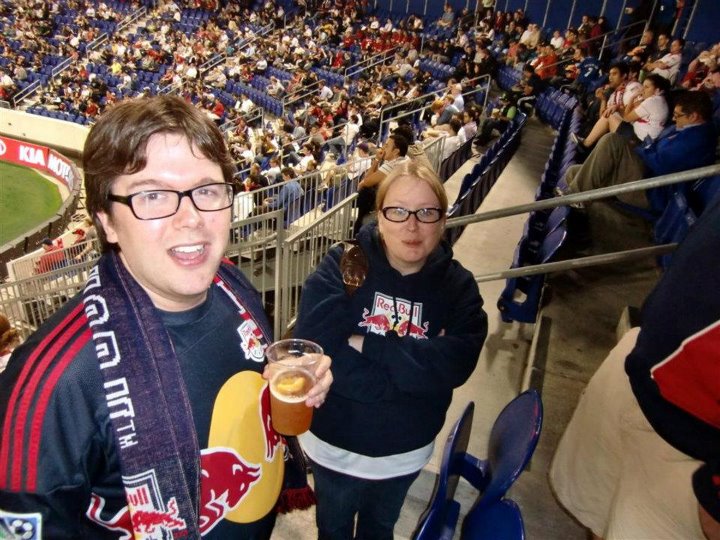 When I started mentally drafting this earlier in the week, I planned to spend the rest of this post going on and on with a broad portrait of how Katie means everything to me. Gushing adjectives, heaping praise – on the event of our 10th anniversary, it would be a totally reasonable (albeit typical) way for me to wrap up one of these posts.

But last night – when I called for an impromptu at-home karaoke night (a semi-regular occurance), she mischievously decided to post this on Facebook:

So rather than try to enumerate all of the roles Katie fills in my life, let me instead rib her a little bit with some of the more obscure things I love about her.

I love the way she passes out on the couch watching TV, with the cat carefully cradled in her arms. (Here’s what that looks like.)

I love the way she mocks my choices in karaoke standards (which I will readily admit are terrible) when hers are just as amazing. Have you ever see her do Du Hast? Because let me tell you – it’s more epic than any performance of a Toto song I could ever hope to do.

I love how, when she’s having a girl’s night out, she inevitably wants to have complicated tipsy text message conversations with me – even though the point of said nights are to hang out with her friends.

I love her unending appetite to plow through entire runs of television shows on Netflix. This is a girl who watched every episode of the Cosby Show in less than a month.

I love our shared distaste of bananas. You know how you know you have a great marriage? You both hate the same fruit.

I love that she turned into more of an energetic sports fan than I could ever hope to be. Because of my press credentials, we don’t get much of a chance to sit together at Red Bulls games any more – so we part ways when we get to the gate. And after I get the lineup sheet, I know it’s only a matter of time until my cell phone rings, demanding explanations and cursing up a storm that her preferred lineup isn’t the one the coach has chosen for that night.

I love that either of us can break out into song or references from The Eric Andre Show and the other will jump right in.

I love that sleepy smile she gives me when she wakes up on Saturday mornings.

I love her baking and cooking, which for reasons I can’t understand she has no faith in. She makes a mean snickerdoodle.

I love that she got addicted to Diablo 3 without any real prompting from me.

I love that she’s willing to debate me about whether the KLF were geniuses or idiots. (This comes up more than you might think.)

And I love that every day, I can be assured she’s going to make my day better in some way. 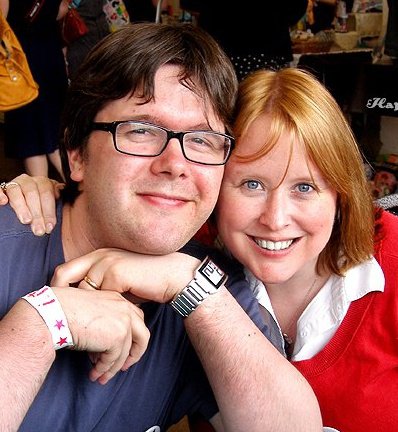 Ten years may be a long time, but years down the road, it’s going to look like a drop in the bucket.

Early next week, we’ll be heading out on the longest vacation we’ve ever taken together. We’ll be making a three city run – to the Rose City, the City Of Glass, and the Second City. Plans remain mostly light, but will certainly end up packed full of things to see and do.

And then, it’ll be back to the real world – where we will keep going on adventures, causing trouble, and smiling at each other until our hearts stop. The first ten years have been great – and the rest will be even better.