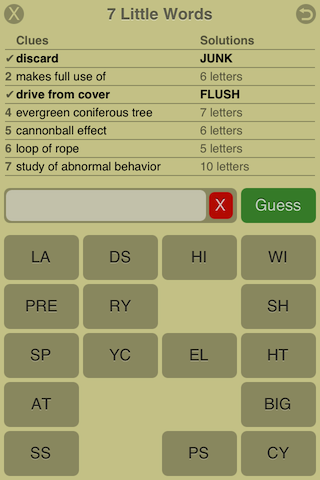 My childhood is filled with the debris of paper puzzles in various states of completion. Crossword books, scattered copies of GAMES Magazine, and orange-capped invisible ink pens filled my attention long before handheld gaming grew up with the Game Boy Advance. I would spend summer vacations crashed onto a bed or nestled in the car, mechanical pencil in hand, one finger carefully holding place on the answers page in case I got too stumped. After completing a puzzle, I’d place a checkmark at the top of the page and move on to the next.

When I first came across Blue Ox’s 7 Little Words, I immediately connected with the simplicity. Seven clues, twenty lettered blocks – use the blocks to spell words that solve the clues. Solving is one part vocabulary test, one part process of elimination, one part riddle solving, and one part stumbling luck. My average thought process while solving a clue in the puzzle above:

The beauty of 7 Little Words for me is that it is pure and straightforward. No score, no timer, no hints, no obnoxious noises if you’re wrong, nothing to unlock by solving puzzles. No Twitter integration, no leaderboards, no achievements. No flashy graphics, no driving soundtrack, no significant animation. It’s just you and the puzzles.

There is one thing, though. Once you finish the seventh word in a puzzle, and all the blocks are gone, a large smiley face fades in as a pleasant tone plays. The puzzle gets a checkmark next to it in the menu.

But success is just a small marker on the march forward. There’s always another puzzle waiting.

7 Little Words is available for iOS. The base game is free; additional packs with 50 puzzles are typically $1 each.