The leftovers are gone. The fullness has subsided. It’s time to document. 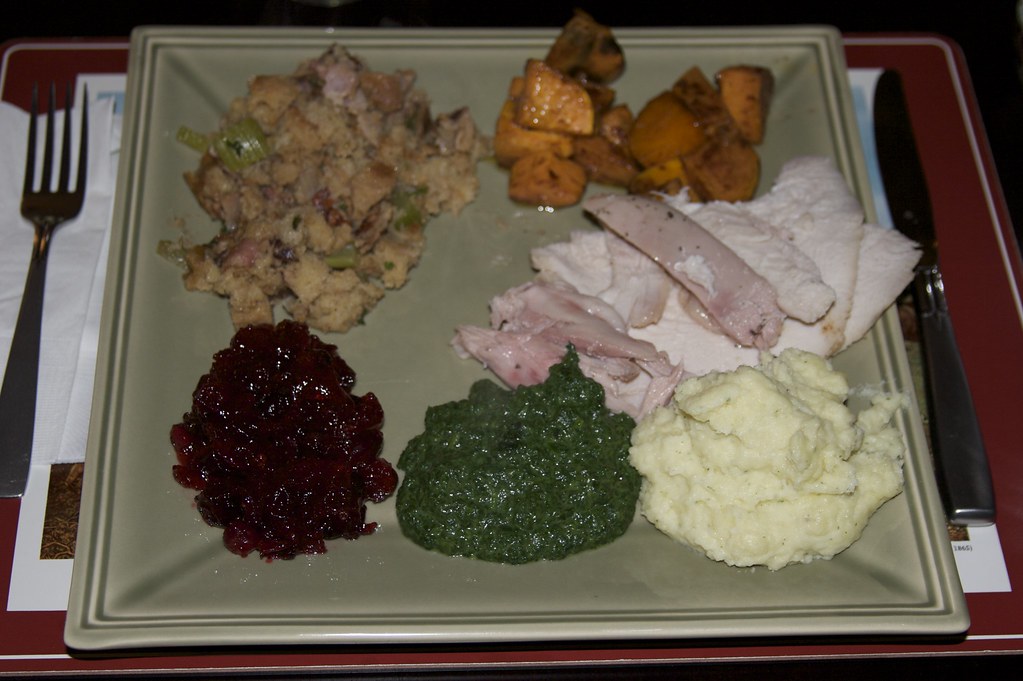 For much of the last six years, cooking had become more an act of desperation than a usual course of action. A year of frequent but uncreative cooking in Ithaca gave way to five years of constant dining out while in Astoria. Our pots and pans sat lonely in our oven, doing very little.

But the situation has turned around once more, and I am cooking regularly. So much so that we’ve successfully appealed to both sets of parents that we wanted to spend holidays here, rather than making the standard trips to upstate NY and Maryland to split the holidays. (For reference: our previous two Thanksgivings spent in the city were 2003 – invited to two friends’ dinners – and 2007, which we ate at Eleven Madison Park.)

Katie and I spent much of the last week scrambling. After scouring our cookbooks and favorite websites, we had settled on preparing six dishes and three sauces. It is the largest meal we’ve ever cooked to date – and will probably only be topped by Thanksgiving next year. And, just to be clear: we’ve only been cooking in earnest for three months.

If you’re doing a large roast for the first time, one thing becomes apparently: no one can agree on how to do turkey. Brine, baste, or au natural? Stuff, or don’t stuff? Temperature: start high and turn it down, or a constant “slow and low”?
When faced with contradictory recipes, I improvise. Perhaps one would think that’s dangerous to do with something that’s the centerpiece of a meal. But if everyone has different variations, chances are there’s no one right way – and you can adapt as you see fit. Also, so long as you’re paying attention while you cook, the chances of something igniting or burning are extremely low.
In terms of turkey selection: basic worked pretty well. I went with a 12 pound Shoprite Fresh Turkey. I’m not a believer in buying a humongous turkey, despite my parents frequently opting for a 20+ pound bird when we would have at most 6 people dining. Remember that it’s rare that people will want seconds, let alone thirds. 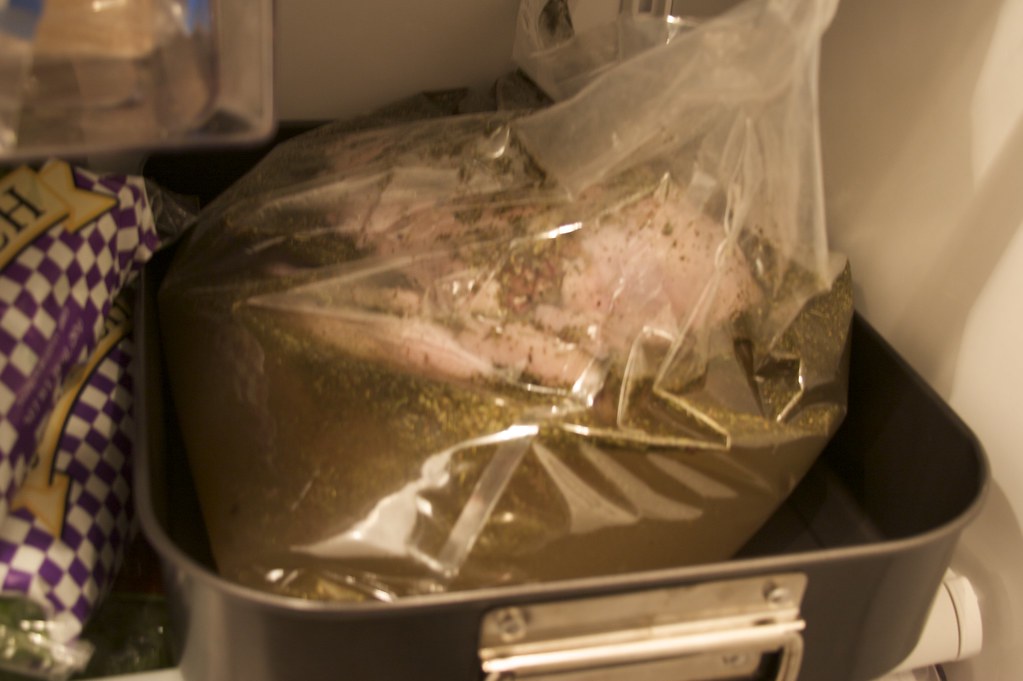 I did opt to brine the bird. (Unfamiliar with brining? Cooking for Engineers has a good introduction.) I had actually been hoping to brine something since I first read about the process, in Ming Tsai’s Blue Ginger nearly ten years ago – how memories persist.

While I originally intended to make my own brine, I came across Fire & Flavor’s Turkey Perfect Herb Brining Mix. It seemed like a reasonable place to save a step in what would end up being nearly a solid day of cooking.

Fire & Flavor also make brining bags. Having purchased a bucket that I was intending to use, this seemed like a much better idea.
After brining for about 12 hours, I pulled the bird out of the bag, rinsed it off, and placed it back in the fridge. 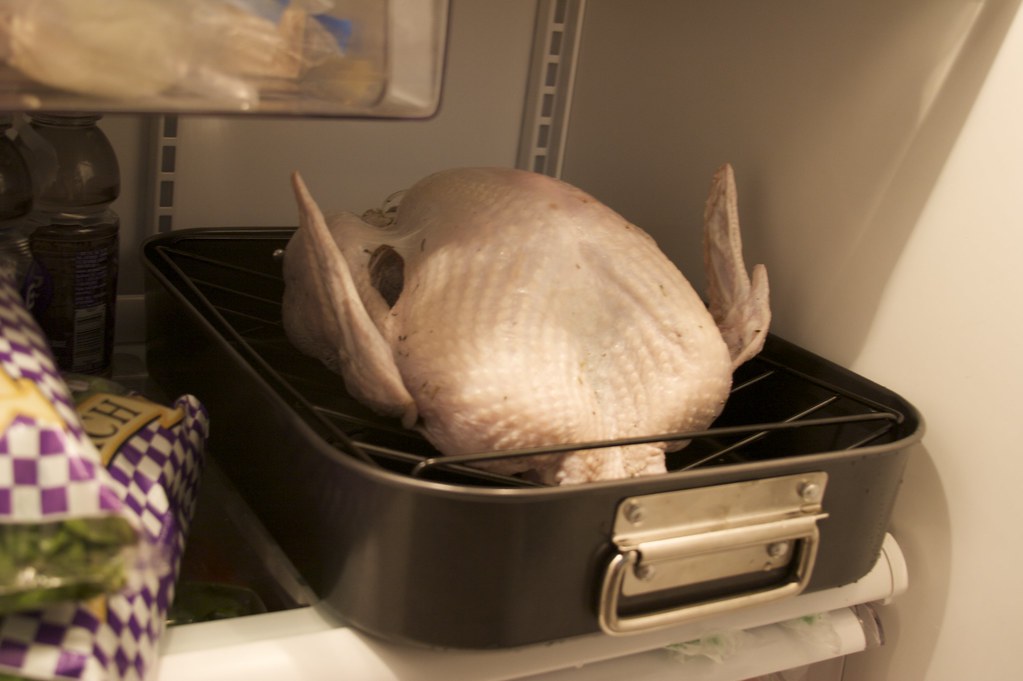 One thing, in hindsight, I wish I hadn’t done: Fire & Flavor calls for making three inch slits through the skin near the thickest part of each breast. This led to a lot of herbs getting trapped near particular pieces of the meat, leading to uneven flavoring. It also hurts the presentation a touch. I would recommend just loosening the skin using normal means, rather than reaching for the knife.

The roast went into the oven around 2 PM: I opted for James Paterson’s “How To Roast A Turkey” for basic instructions. I trussed the bird to ensure the wings wouldn’t burn to a crisp. I brushed some butter on and doused the thing in kosher salt. I did the buttered foil tent, and removed it after an hour. But I ignored the recommendation to not use a roasting rack – I’d rather deal with a chance of skin tearing than the chance of one side browning too much due to contact with the pan.

About two hours in – an hour before every recommendation I had read about when a twelve pound bird would be done – I checked the temperature. I was about five degrees short of my original done point (145°F). Shit. I was running the risk of having all the dishes trainwreck, as the turkey was going to come out before most of the sides were actually done.

(An aside: when I was cooking steak in September, I had commented that given the steak’s overdoneness, “perhaps my stove runs hotter than Danny Meyer’s did in the late 80’s.” I was accused by Dr. Szukala of making a “classic” me-style comment. The turkey being done nearly an hour early than it should have not only indicates my oven runs much hotter than the dial is set to, but also vindicates my previous comment. Game, set, match, Zach.)
Checking again 15 minutes later showed me we were at 150°F; I pulled the turkey out, sat him on a plate, and covered him in foil, giving him thirty minutes to rest.

When it came time for carving – the duties which were handed off to my father-in-law, as my previous experience did not end well – the foil came off and we could see how it came out. 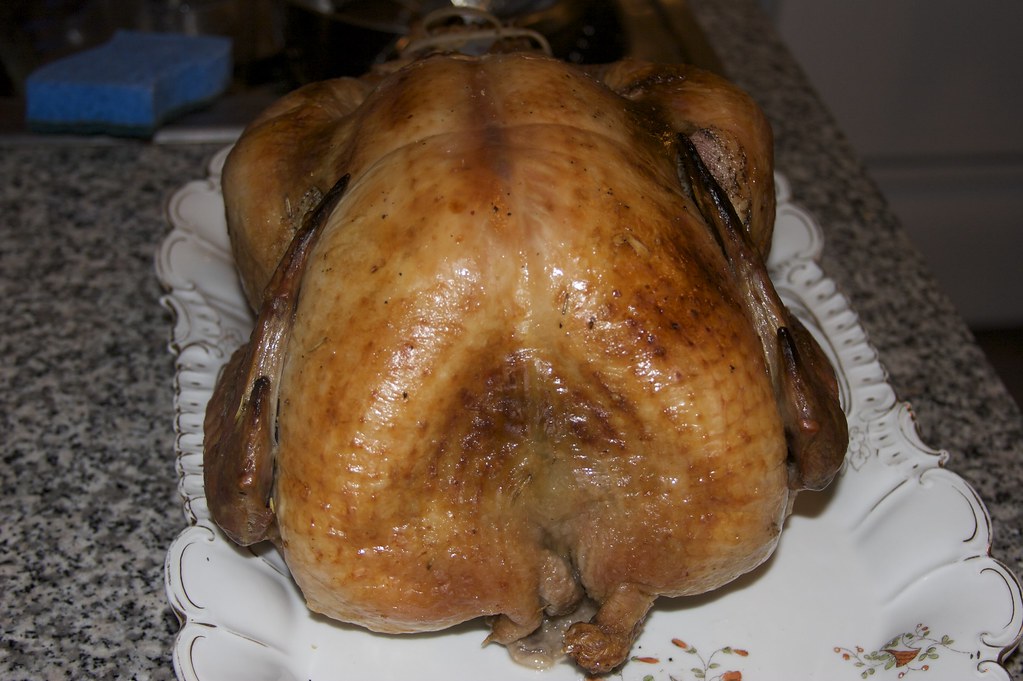 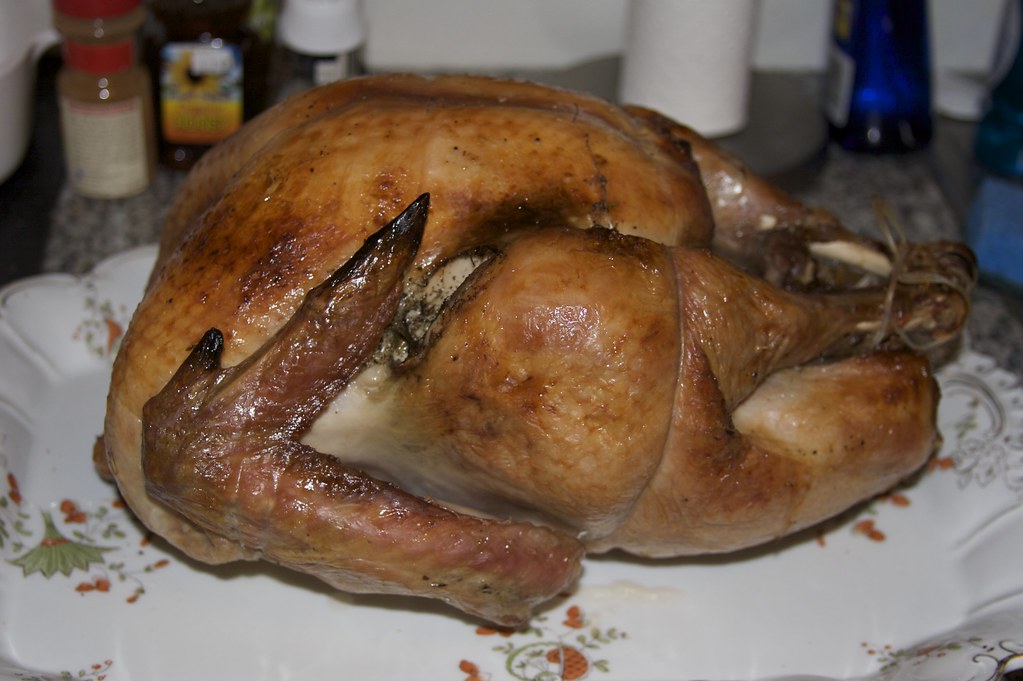 Okay, okay, it looks gorgeous – but how did it taste?

I can say that I absolutely loved it, with one caveat: I am a fan of salt. And this meat, while flavorful and moist, was quite saltier than any other turkey I’ve had. For me, this is great. But for others, maybe not. If you need to watch your salt intake, or don’t enjoy the flavor of it, you may want to skip the brining process. 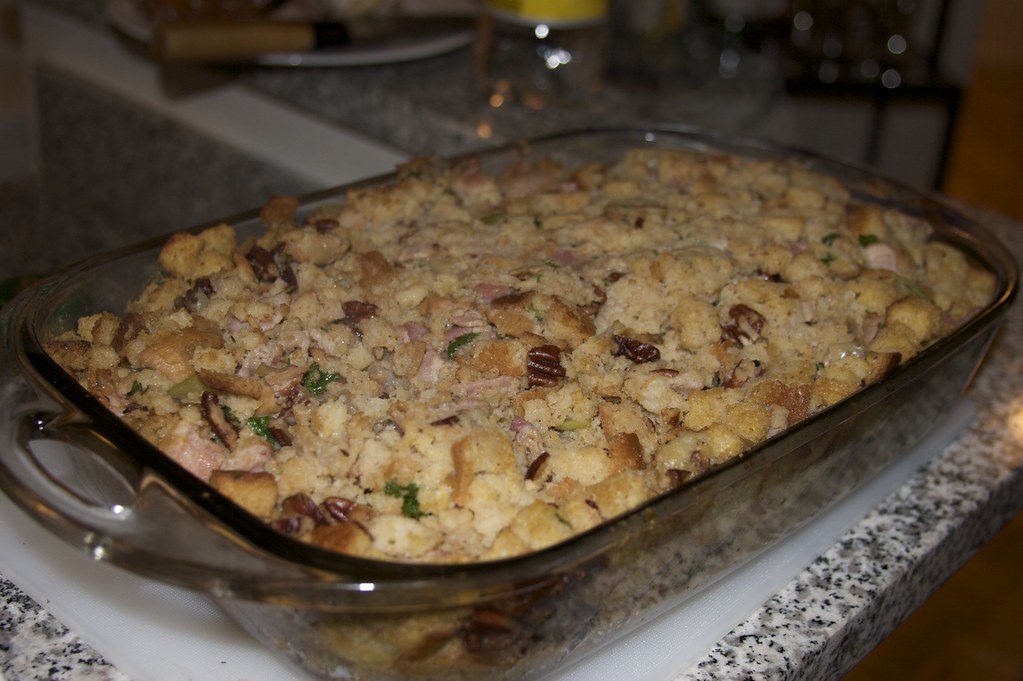 Much less improvisation here: we went nearly straight from the book with Jean Anderson’s Corn Bread Dressing with Pecans and Bacon. We did cheat a little and went for a bagged cornbread stuffing base, since baking the required 12 cups of cornbread struck us as a gargantuan task. 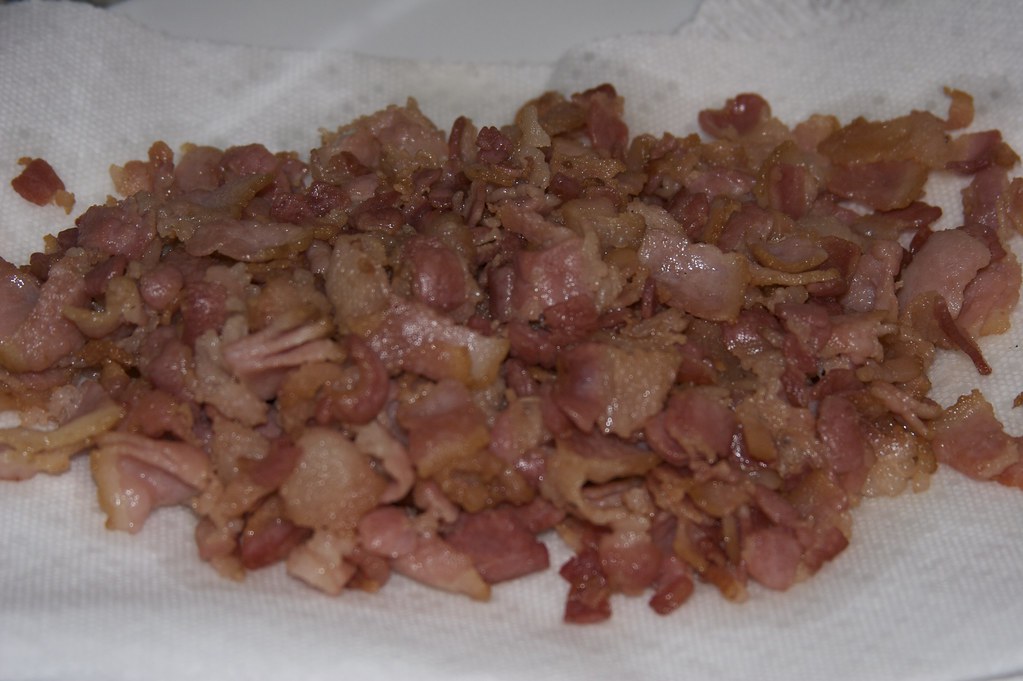 Also: one cannot underestimate the value of excellent bacon as an ingredient. I will reconfirm this afternoon after I do the shopping, but I believe this was Primrose Brown Sugar Double Hickory Smoked bacon.

We cooked the stuffing outside the bird – I didn’t want to complicate the cooking times or mess with the consistency of the stuffing. In hindsight: this recipe will serve at least 8 people, maybe 12 – you probably want to halve it. 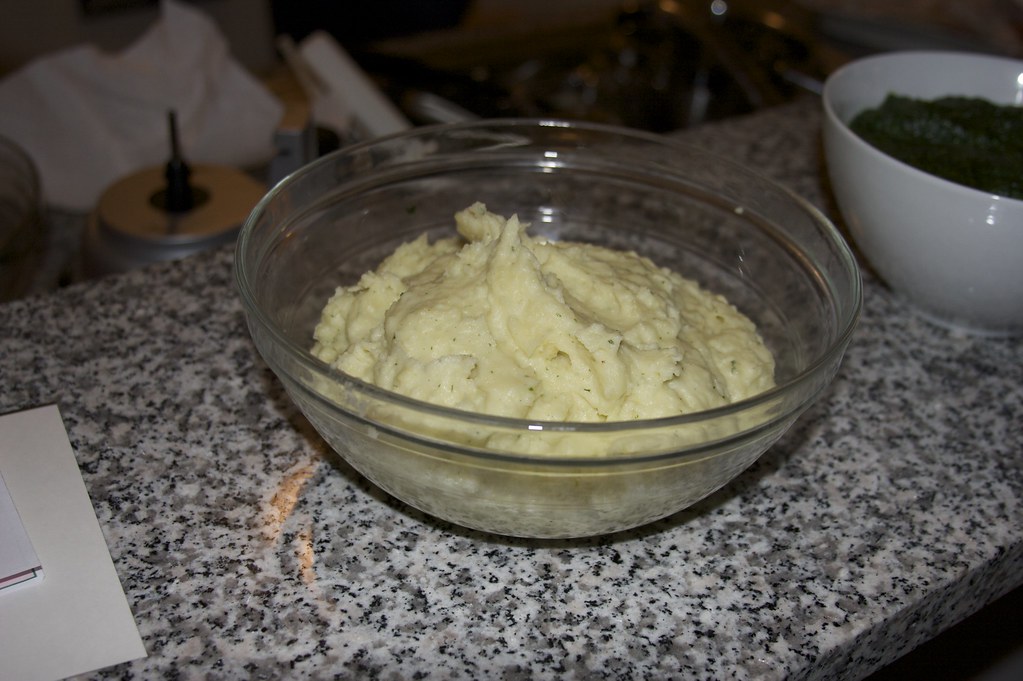 A bit of an adaptation, and one I wasn’t entirely happy with – but I seemed to be the only one who felt that way.

My mashed potato recipe gold standard can be found in the Union Square Cafe cookbook, page 232. The original intention was to create the Basil Mashed Potatoes variant, as we had made previously (see the steak anecdote above).

But faced with a wilting basil plant – only half the amount needed for the recipe – I swapped in some extra garlic to give it some extra punch. (I also didn’t have any pine nuts.) But by not frying the garlic, it overwhelmed the basil and came across as very sharp, rather than the sort of golden flavor you get with fried garlic.

But again – everyone else loved it. Maybe my taste buds just aren’t that into garlic anymore. 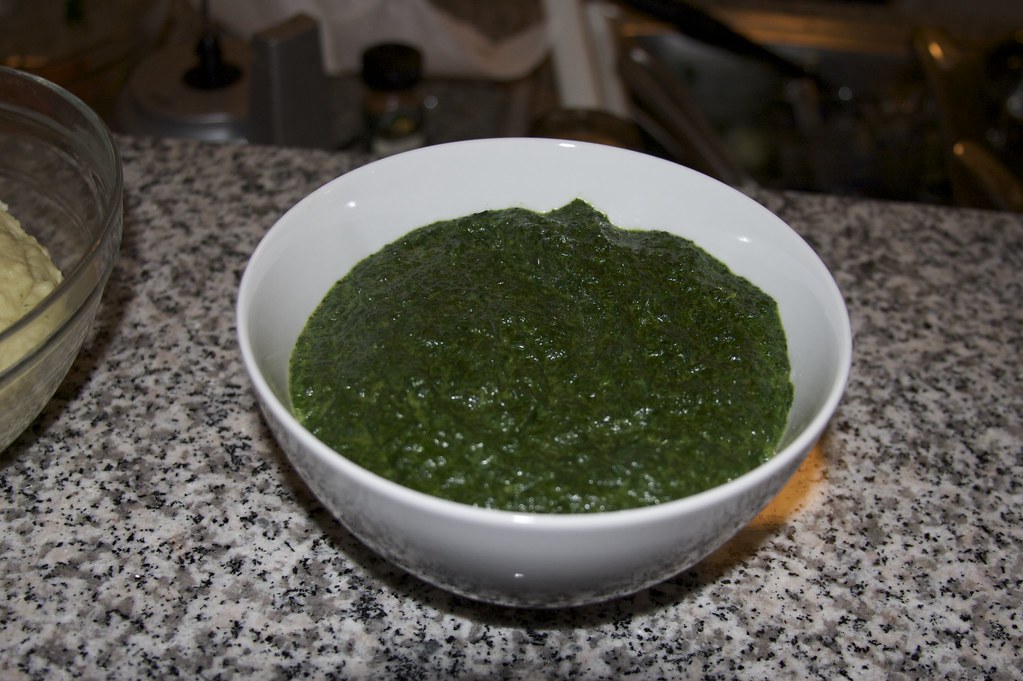 Another USC recipe. I’m not personally a big fan of creamed spinach, but this came out fine.

Just one thing: the recipe says that for four servings, you need three pounds of spinach. No, wait: three pounds of washed, de-stemmed spinach. This may not seem like much, but it is more spinach than anyone should ever attempt to prepare at home. We halved the spinach quantity and used the same amount of béchamel, and it came out just as well. 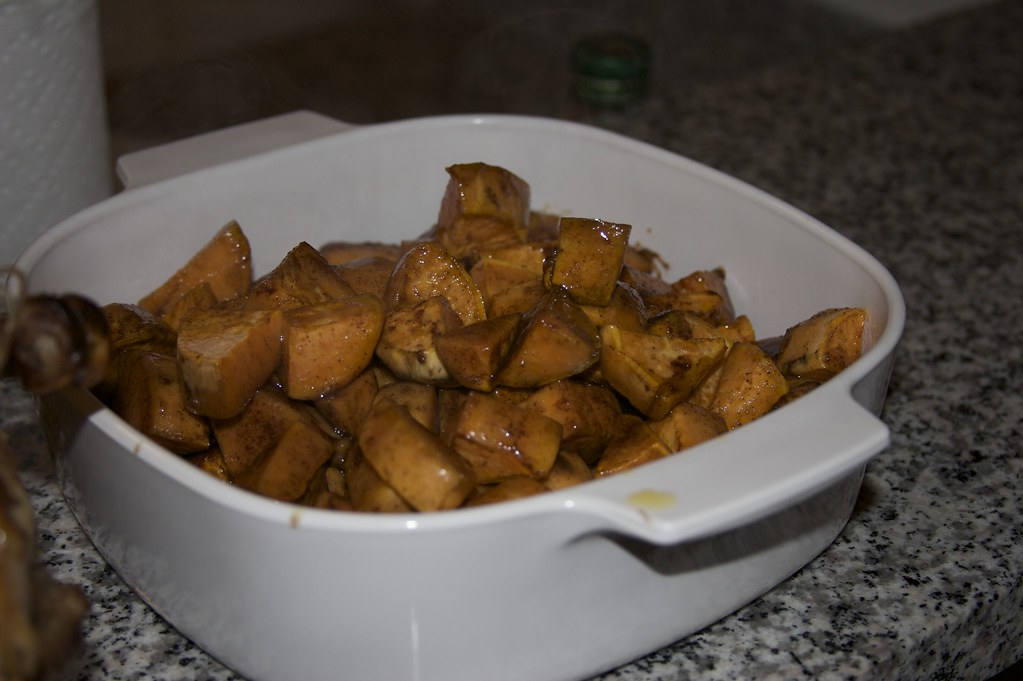 Katie did Tyler Florence’s Roasted Sweet Potatoes with Honey Butter. Simple, flavorful, delicious – and not quite as overpowering as the traditional marshmallow topped yams. 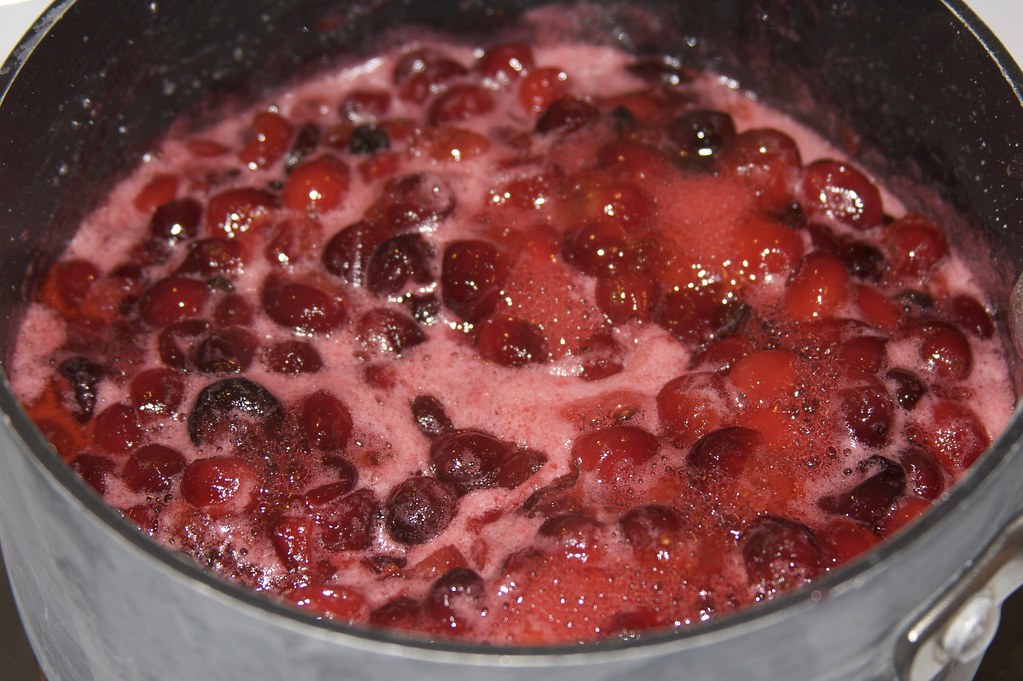 It is tempting to buy canned cranberry sauce, thinking that it will save you time and that it’s a piece of the equation that nobody will really get hung up about. But the ten minutes of work needed to make really good cranberry sauce – I don’t think that’s worth skipping.

This is the Cook’s Illustrated Cranberry Sauce with Champagne and Currants. It may have been the easiest dish to make, and it was one of the most satisfying.

As part of the run-up to Thanksgiving, I had done a test roast – a four pound chicken, cooked a few days prior. I had attempted to use Alice Waters’ pan gravy recipe – but it was not to be. It didn’t thicken the way I expected.

Not wanting to leave things to chance, we grabbed a packet of McCormick Turkey Gravy mix. But the instructions baffled me: regular preparation calls for a cup of water, while “homestyle” called for a 1/4 cup of roast drippings and 3/4 cup of water.

Surely we could be more homestyle than that. My recommendation is to scrape up every last bit of fat and dripping you can from the pan; if you really don’t have a full cup measure (which we didn’t), round that off with water.

The result was an excellent gravy – a little oily on the top, but it’s hard to be healthy when it comes to gravy.

In all of my false starts with cooking, I always lamented that I didn’t ever have real vanilla beans. Lo and behold, I found some – and so I made Vanilla Bean Whipped Cream.

A month or so back, I mistakenly tried to hand whisk whipped cream. My wrist is happy to note that we now have a hand mixer. 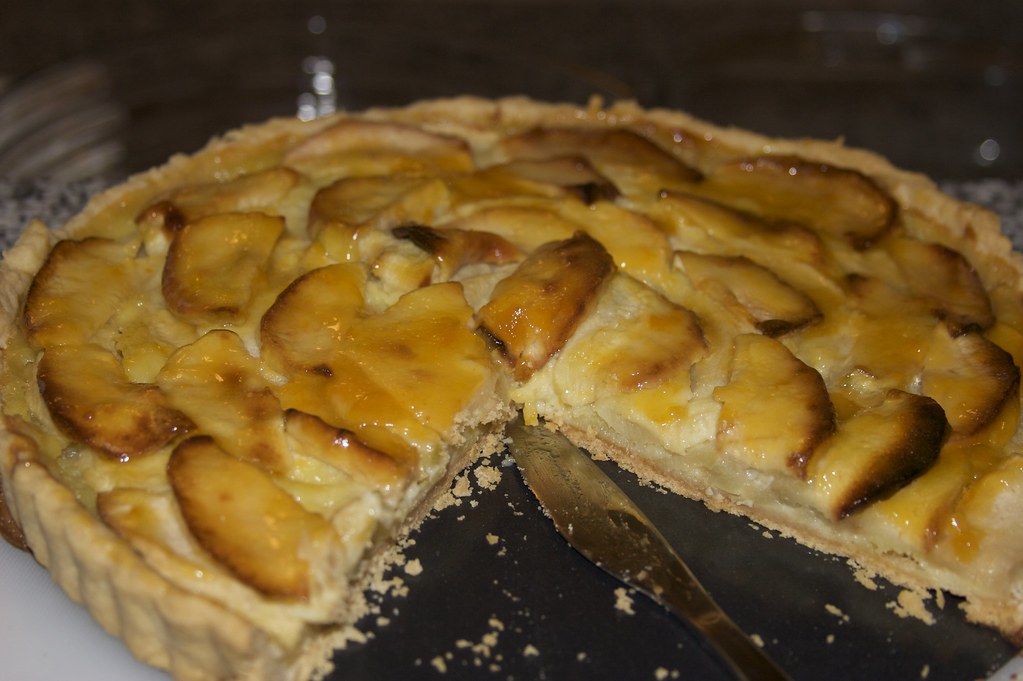 I am still not sure about Paula Deen. I remain resoundingly convinced that she is trying to kill us. But – I cannot argue that her apple tart recipe is quite good. Quite the quandary. 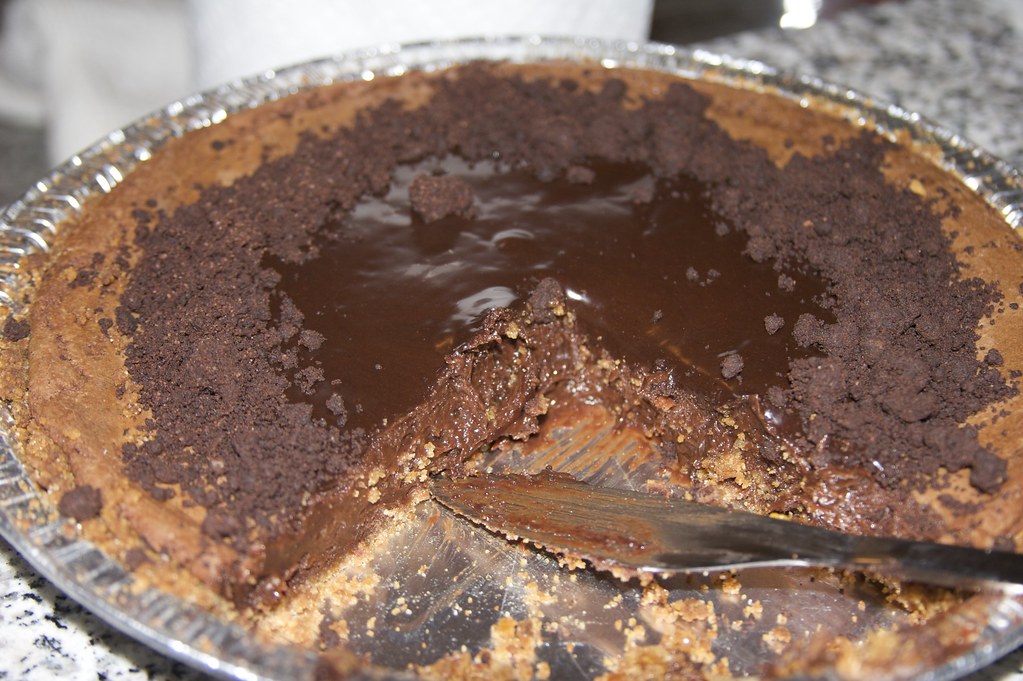 I love a good contingency plan.

As a result of an unfortunate comedy of errors at the office that ruined my day, as well as a desire for second and/or backup dessert, I ventured down to the newly opened Momofuku Bakery & Milk Bar to examine what whole pies they had available. I was hoping for Crack Pie; I ended up with a Brownie Pie.

I am limiting myself to one slice every two days, or else I will surely end in some sort of diabetic coma. This pie is so rich, I have to use the whipped cream to cut the sugar content.

(It should be noted that the prices of the desserts are not posted on the Momofuku Bakery website. I can only assume this is intentional and not an oversight, having now had first hand experience as to the cost of full pies and cakes. Under any other circumstance, I would have passed. But it was that kind of a day at work. You understand, I’m sure.) 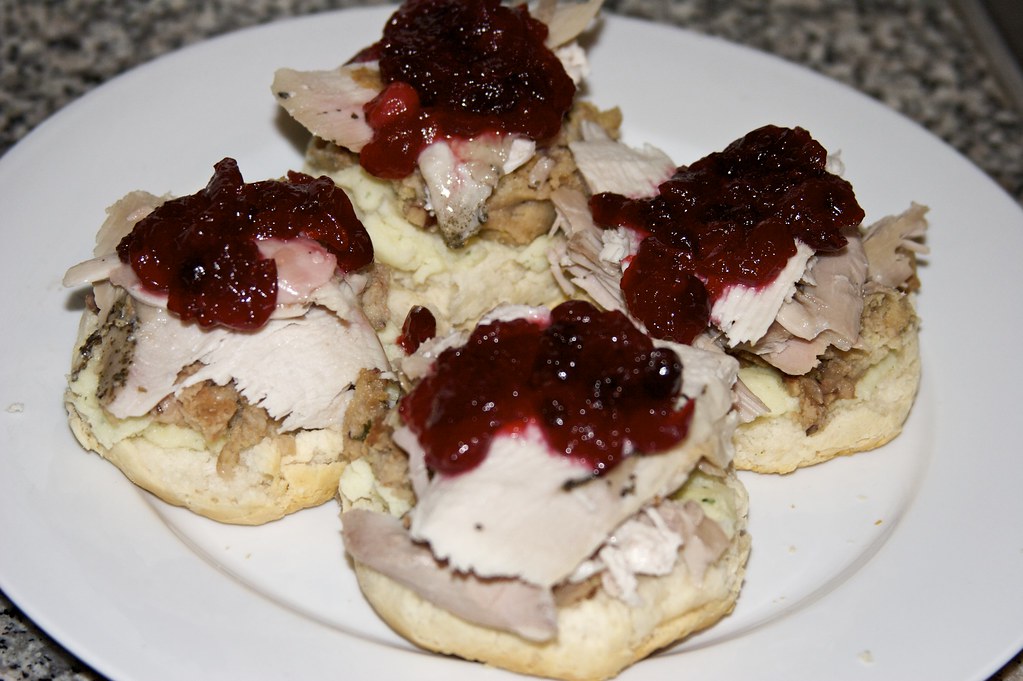