(I’m breaking up my thoughts about the WWDC keynote into multiple posts this year.)

Apple did, in their usual pretzel of logic way, address the big issue regarding application development: apps that need to function in the background.

In many ways, the proposal (a single connection to Apple’s server handles push notification from servers) does have many benefits, and I can practically recite them off of Scott Forstall’s slides. It will lead to better system performance, help save on battery life, and certainly streamline the networking.

But rewind back to the SDK announcement on March 6th. Remember this slide? 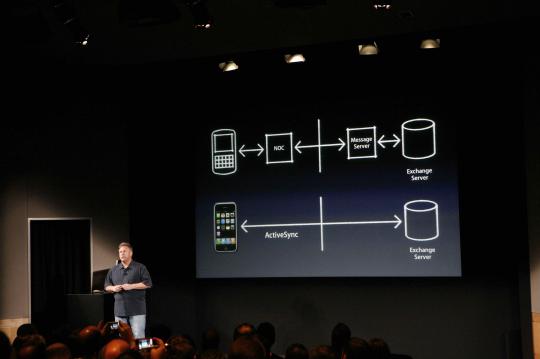 Not three months ago, Apple was touting how superior their Exchange support was to the Blackberry because you didn’t have to go through a server owned by a vendor to gain functionality.

The other shoe certainly seems to have dropped here. Apple is offering to be the intermediary for every app that needs backgrounding, much like RIM is for everyone who wants Blackberry email. With the number of issues RIM has had with their service over the last year, Apple is going to be under high scrutiny if they have similar outages.

Don’t get me wrong; this isn’t nearly as crippling as RIM’s reliance on their cloud servers. I’d rather lose my backgrounding for, say, an IM client than my email. But there are implications for developers, and I don’t even want to think about what this means for enterprises writing apps. I can only hope Apple makes their retention policy very clear.