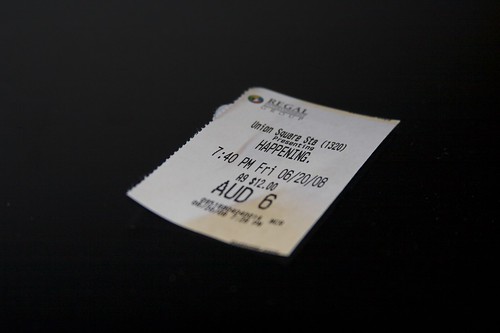 I’m not writing this post just to tell you that the movie is bad. I instead aspire to fill in some of the gaps in the Orr’s aforementioned “review”. The movie is not as bad as he makes it out to be; it is far, far worse.

To begin: the concept is that an odorless, colorless airborne neurotoxin is being released by plants, trees, and other various greens. But without wind, said neurotoxin would go straight up. Yes, the wind is the device through which M. Night indicates RUN RUN RUN, but like all good serial killers, it has to be slower than the fleeing cast. Quandary: *how do you make the wind fast enough to be scary, but not fast enough to catch someone?* M. Night’s answer: blow the wind perpendicular to the direction they’re running, and have it creep slowly in the proper direction. Naturally, this looks ridiculous: the wind is advancing towards them at less than 5 MPH, never mind the neurotoxin being scattered the wrong direction.

Of course, what good is a neurotoxin if it doesn’t always work? In two scenes, the leads are caught in said wind, and nothing happens. Something resembling an explanation only follows one of these *happenings*.

Speaking of which: rather than appearing on camera in his usual movie-ruining cameo, M. Night’s script calls for Mark Wahlberg to use a form of the word “happening” more times than I could count.

But to my surprise – *what a twist!* – an investigation into IMDB reveals that M. Night spoke a single word of dialog over the phone – “Hello?”. This was enough to get him 12th billing in the credits, above most every other background actor. He is akin to the girl on the other end of the phone in rap songs, only he also wrote the song and directed the video.

I could spend an entire article on the emotionless void that is Mark Wahlberg’s acting, but I’d prefer to boil it down to a single anecdote. While seeking refuge in a house, Wahlberg spies a plant in the corner. He begins to talk to it in a “I am trying to peacefully negotiate with a hostile life form” voice. He soon realizes the plant is plastic, yet continues talking to it – *comedy!* At no point does he realize he’s being out-acted by the plant.

At the one point in the movie he shows emotion – a mild freakout, where he shouts “I need a second okay? Why can’t anybody give me a goddamn second?!” – he instructs himself to “be scientific, douchebag”. I am not joking.

This isn’t to let the other lead actors off the hook. John Leguizamo substitutes wearing glasses for acting, but in his defense he doesn’t have much to work with. Zooey Deschanel fares no better, repeatedly forgetting that they’re being attacked by something in the air.

But the real joy to be had in the background actors, who are made to say some ridiculous shit. An army private, upon being told about some bodies on the road, actually says “Cheese and crackers”. A thirteen year old shouts “OPEN THE DOOR, BITCH!”. An old woman shouts “Why are you eyeing my lemon drink?” And a botanist gets to be the first character to lob a hypothesis about the plants when he says:

> “We’re packing hot dogs for the road. You know, hot dogs get a bad rap. They got a cool shape. They got protein. You like hot dogs, right? By the way, I think I know what’s causing this.”

The advertising for the film played heavily upon the idea that this would be the first R-rated film to come from M. Night, but as one might expect, the violence is tame in light of contemporaries. Most deaths are either off screen, cut away from at the moment of impact, or shot at a very wide angle. Perhaps I’m an outlier – I did just see Dario Argento’s *Mother Of Tears* – but more graphic violence can be seen regularly on network television. It doesn’t help that a lot of the violence is unconvincing – tiny bullet holes, painted on blood.

* People who were traveling on a train in one scene jump in cars to flee a different scene not five minutes later.
* Six cars arrive at a four-way intersection on a dirt road almost simultaneously; the next scene, showing everyone standing around outside, has about forty actors in it.
* Not twenty seconds after showing that the weather in Philidelphia is 86°F, a cop remarks that it is “kinda chilly today” to a cabbie.
* Sequentially, three people affected by the neurotoxin – remember, the second phase is disorientation – calmly walk over to a handgun, pick it up, and shoot themselves in the head.
* John Leguizamo joins a car of five heading east to Princeton, NJ (abandoning his daughter in the process) after spending an hour on a train heading west. The reason? To find his wife, who was “buying a dollhouse” for their daughter.
* The scene above, with the plastic tree, ends up with characters complaining that everything in the house is fake – the food, the computer, the glasses of wine, etc. Fleeing the house, a sign can be seen off to the side reading “Model Home”. Obviously this sign was placed for if you were too dense to pick that up on your own. But then in what I can only call a directorial flare, M. Night chooses to zoom in on that very sign. What. A. Twist.

*The Happening* is not merely a bad film, it is a horrible film. It is so horrible, it passes the rich “cheesy bad” vein that can be tapped for so many of my favorite films (*Death Race 2000*, *Showgirls*, *The Apple*, *Jesus Christ Vampire Hunter*) and ends up in some sort of unfathomably-bad quarantine.

*The Happening* redefines what it means for a movie to be bad.