Today was a special day for Bemani nerds in the NYC area.

[Taku “TaQ” Sakakibara](https://vjarmy.com/wiki/index.php/Taku_Sakakibara), well known as the producer of hard techno for the Beatmania IIDX series, had his first symphony, “Antevorte”, premiered at Carnegie Hall. The piece was performed by the [New York Symphonic Ensemble](http://www.n-y-s-e.org/), as part of the Velia International Music Festival. 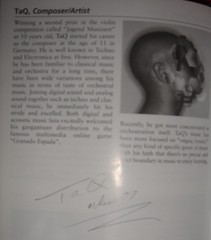 >Winning a second prize in the violin competition called “Jugend Musiziert” at 10 years old, TaQ started his career as the composer at the age of 11 in Germany. He is well known in Techno and Electronica at first. However, since he has been familiar to classical music and orchestra for a long time, there have been wide variations among his music in terms of taste of orchestral music. Joining digital sound and analog sound together such as techno and classical music, he immediately hit his stride and excelled. Both digital and acoustic music fans excitedly welcomed his gargantuan distribution to the famous multimedia online game “Granado Espada”.

>Recently, he got more concentrated in orchestration itself. TaQ’s music has been more focused on “ongaq (music)” than any kind of specific genre of music with his faith that there’s no precise and strict boundary in music to enjoy listening.

The notes on the piece:

>Stromatiolite, the oldest of mineral substances that first released oxygen, is often described as an inorganic organic matter that provides a spark for an emergence of life on earth. TaQ’s album *ongaq: stromatolite*, which was consisted of electronic music, runs on the following motif, inspired by the title *stromatolite*: the expansiveness of the nature, the genesis of life, and the long path to the present. A long flow of history that went from a piece of ore and finally formed a town through a sum of things that the nature kingdom holds is expressed through the world of his music.

>Although it is just a little mineral ore, stromatolite has been kept watching the long and the epic proportional life of everything on earth for an excessive amount of long time. Stromatolite has been always philosophical about releasing oxygen though any drastic changes or big biological evolution had been occurred in its surroundings. For the ore, all evolutionary transitions that have been happened in the universe through the enormously long time and eras for us is perfectly same as what it does today and the future is sure to be scheduled naturally by continue doing the same thing. Tremendous long time is almost like a blap. It’s same as the fact that the structure of universe and human cellula are so the same each other.

>Antevorte, the great Roman goddess of “time” and “future” join sthese two world which seems to be different each other together. She lets us know that there’s no difference in time, what we can see is only a fragment of the long time and the future is neither dreamy nor uncertain but full of reality.

The piece itself is what I could best describe as “cinematically orchestral” – it would not feel out of place in a movie or game. It was certainly in line with TaQ’s existing work – I felt some touches of the stromatolite album, as well as the inevitable comparison to Distress (which had a very orchestral feel in the middle).

To those people hoping for a recording, Carnegie Hall rules forbid anything even resembling a recording device, although there’s a chance the hall itself could release a CD of the event.

While I didn’t get to say much to TaQ myself, these were the bits I caught in conversation:

* He is fluent in English, German, and Japanese.
* He will not be returning to make any more music for Bemani games in the foreseeable future – was very firm about this.
* He did mention a Konami-related project he was asked to work on that he will probably be contributing to – but asked us not to tell anyone, so that’s as far as this goes.
* His manager, Jade, mentioned to me that this was TaQ’s first trip to NYC, that he loved it, and that they would love to do a “bounce” night at a club in New York. Pacha was mentioned as a possible venue. (I agreed this was a fantastic idea.) 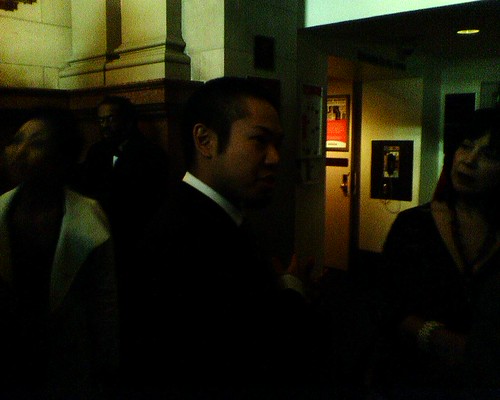 (My apologies to anyone who was looking to talk to me more – we had to depart after the intermission because another project needed my time, and I figured I had gotten what I came for.)