My [magic streak](https://vjarmy.com/archives/2006/09/the_incredible_invincible_hard_d.php) has not held up. 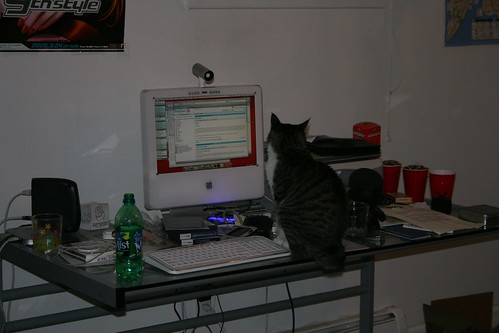 I came home tonight to a faint scent that I could not place. It smelled warm – perhaps my landlord had decided today was the day to turn on our heat. Our heaters are electric, and they always smelled a bit odd.

I did not take the hint that my iMac was off, even when I knew full well that it was still alive and online not 90 minutes beforehand. I rebooted without thinking.
The message struck home when I got up thirty minutes later and noticed that it, again, was off. This time, I sat and watched it reboot. The login screen appeared normally, but not a second after I attempted to type, *boom*. Darkness. I subsequently pulled open the casing and, while I could not locate any particular source of the damage, the burning smell was confirmed to be coming from somewhere on the motherboard; most likely, a blown capacitor.
There is some irony to this. I have been aware that due to my technolust, I have what has been deemed by others to be an absurd upgrade cycle for my hardware. Alternating every year, Katie or I have replaced our primary hardware:

This year was the year I had promised to break this cycle. The year I was sure my iMac G5 was not going to start feeling uncontrollably slow, even while I picked up a MacBook Pro at work and had a very direct comparison with the latest and greatest.

But no, the hardware had to die through natural causes. Now my hand has been forced, and I will be trekking to the Apple Store this weekend to take what has become a mandatory upgrade.