In January of 2004, I launched the first major version of [VJ Army](https://vjarmy.com/iidx/), my Beatmania IIDX score tracking and community site.

Since that time, over 2500 users have registered, inputting nearly 500,000 scores collectively across 10 different game titles. By all traditional means, the site is a smashing success.

However, reality has set in recently: the site has always been rough around the edges, because I am not a designer. Worse, my time to work on the site has been greatly limited as my work obligations continue to grow.

Luckily, there is relief in sight. I am happy to announce VJ Army 4.0, scheduled for release around September 1st of this year. 4.0 represents massive overhauls to both the codebase and the VJ Army coding process. I’ve been really pleased with what’s been accomplished so far, and I’d like to give you a little tour through some of the fantastical newness.

Warning: lots of mind-blowing screenshots ahead.

**WARNING: The screenshots and information below are all preliminary. The screenshots below do not reflect the final version, and may be missing features. Do not panic.**

First and foremost, let me cover the back-end stuff, the things you may not notice from day to day use.

First, the code has been almost entirely rewritten from the ground up. The source is less hacky, more commented, and now adheres to a set of documented coding standards. All code is being thoroughly tested and checked in multiple browsers to make sure behavior does not radically differ from the existing site.

There are a number of other benefits from this, including a large cleanup of the login process, XHTML 1.0 compliance, and more AJAX.

For those unfamiliar with the term, i18n is short for *internationalization*. While the IIDX community is strong in the US, there are areas around the world where there are players who don’t necessarily want to grapple with English.

Thus, VJ Army 4.0 has been modularized to allow for plugin-style localizations. A number of community members have already submitted translations and we currently support German, Spanish, Korean, and Japanese. We hope to have more before launch. (If you are fluent in a language that we don’t currently have and wish to contribute, please get in touch with me.)

This is the largest change, and potentially the most massive: for those people who wish to spend some of their time hacking on the VJ Army source code, there are mechanisms in place to allow for community development. I cannot faithfully call this “open source”, as the code is not available for just anybody, but I intend to let those members with proven PHP skills contribute.

In addition, moving to such a method provides us with better tools to service the site. With the 4.0 launch, we will also be debuting a bug tracker/feature request/roadmap management system. Bugs can be filed against specific components, feature requests can be incorporated into a larger roadmap, and the whole process will work much more smoothly than our existing “put a thread in this forum” method.

Now that that’s out of the way, let’s look at the site. 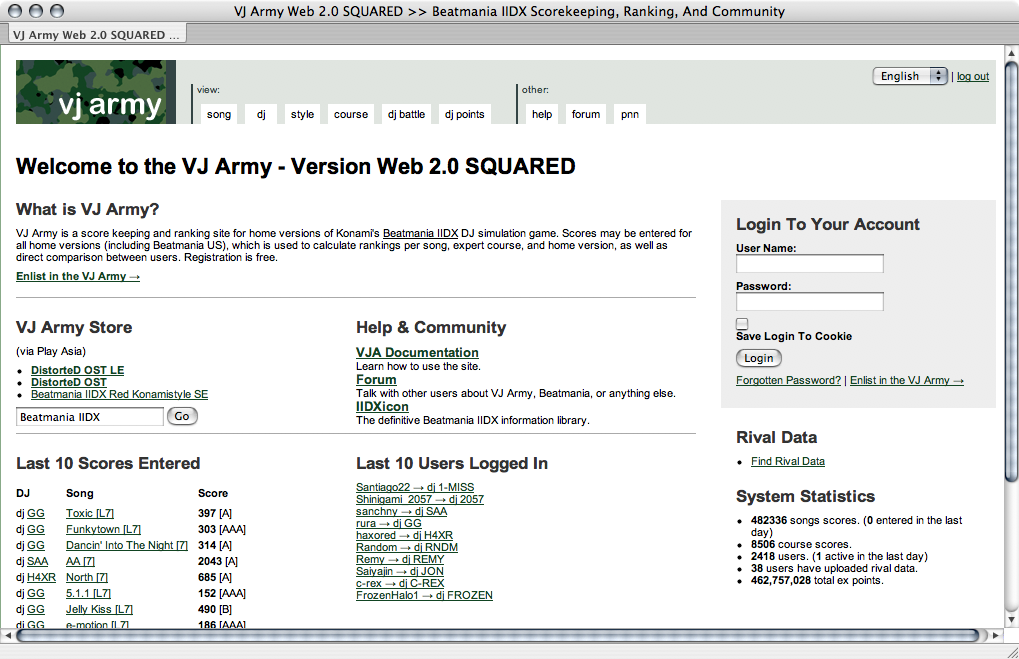 The first and most obvious change is that the main navigation has received a massive redesign. It is more logically divided, easier to read, and contains the localization controls.

The main menu itself has easier to read information and streamlined navigation choices.

Before we get to the matter at hand: I realize that Session Mode is a touchy subject for many users, as they have gotten very used to the multicolored boxes and smashed together display of score data. A number of people love the interface, and as I’ll touch on later, this change will not be forced on people – but, with that said, the new interface is far better: 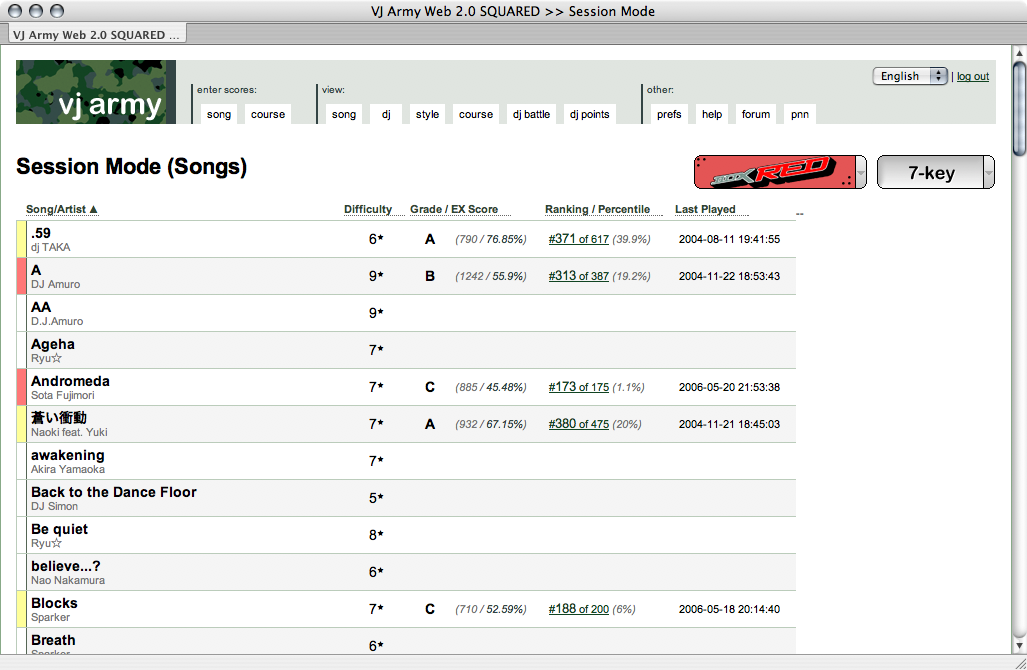 The differences are obvious, but let me outline the key ones:

* The colors that indicate your status have been moved to the left sidebar, ala the IIDX song select.
* Song information is now easier to read.
* Your last play date is displayed, rather than being hidden.

Most importantly: users will have a choice between two input methods. There is a quick, AJAX-based method: 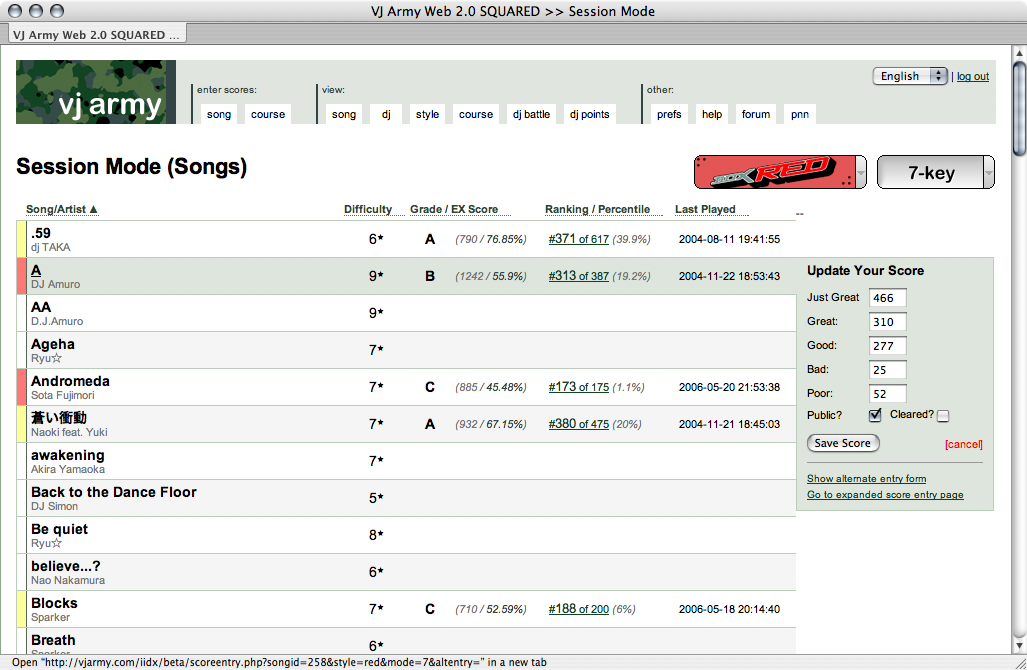 There is also the expanded, traditional-style score entry, which has been revamped for readability: 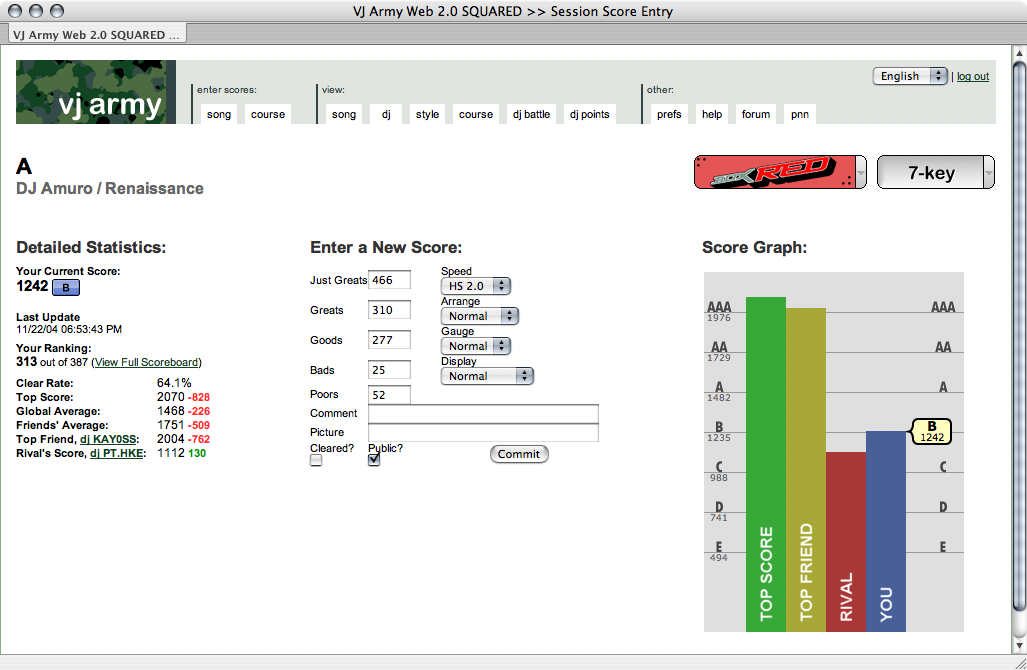 As I mentioned before, this is a radical change to the primary interface that most people associate with VJ Army. I firmly believe that it is better in nearly every way, even in this non-finished form. However, should you wish to continue using the old session interface, it will be available to you – with the caveat that it will never be worked on again. All enhancement and development efforts will go towards the new session interface.

View Song has received some great changes as well. Upon loading it, you’ll see that the selection interface has changed: 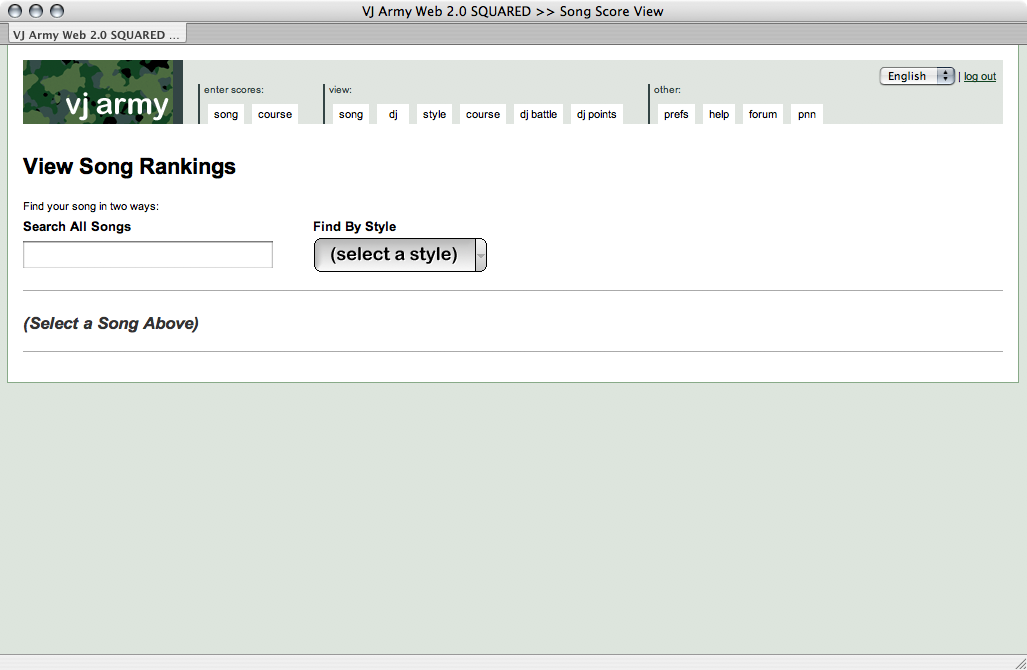 …or they can freely enter text to search for the song title, artist, or genre of their choice: 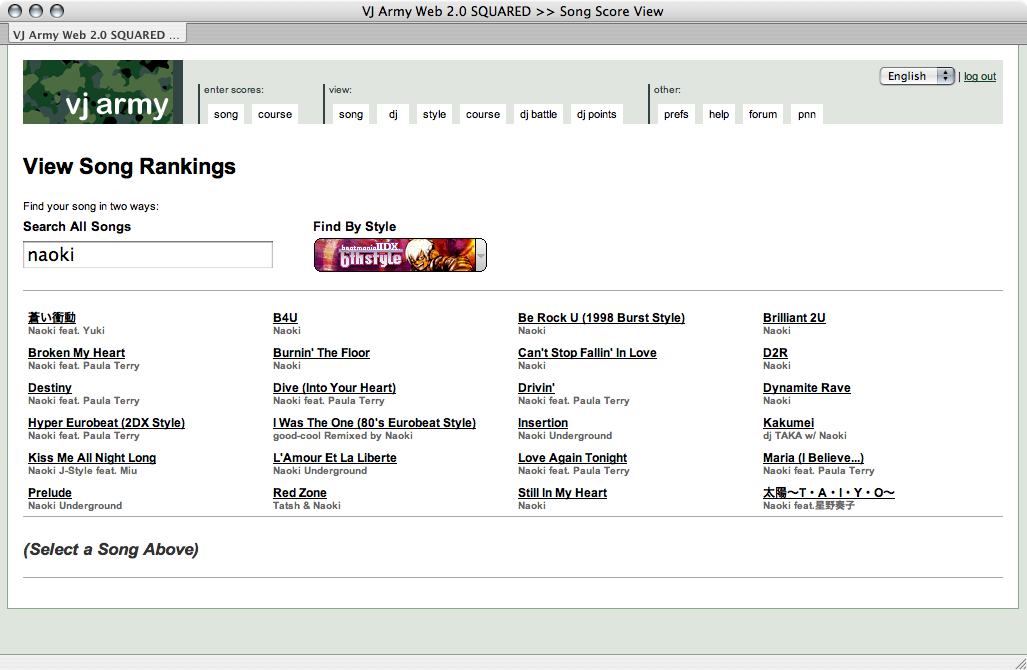 Yes, if you want to search for just dj TAKA songs, or everything labeled as Trance, you can do that. After picking the song (and a small selector for difficulty), you’ll see a cleaned up version of the classic view song: 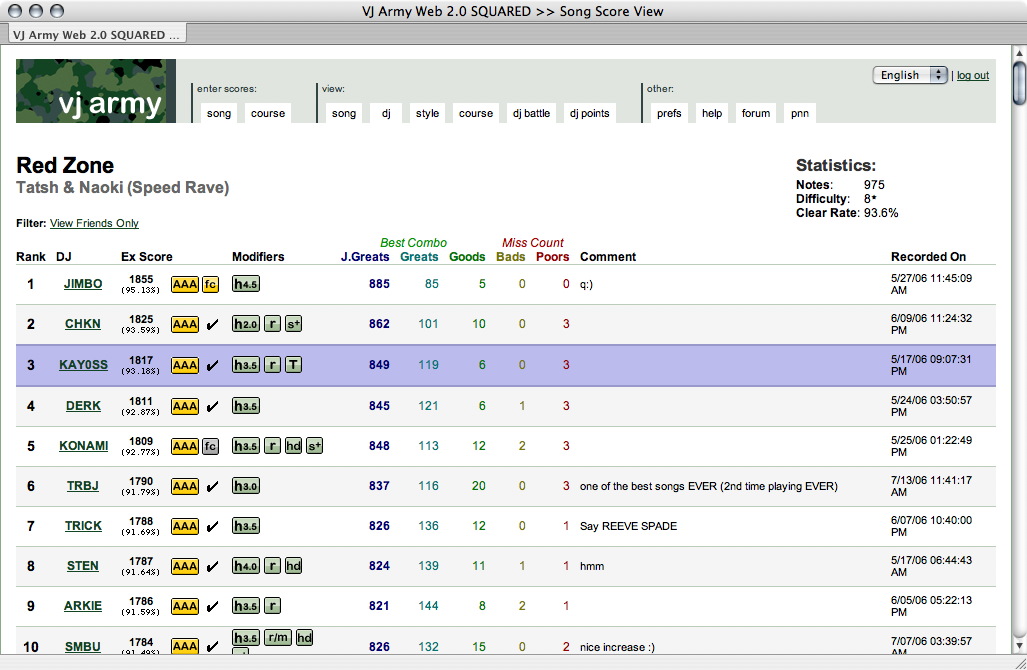 The traditional icons – which have been stolen and stolen again from other score sites – are now all custom and match the new theme. (There are also combined icons, like ran/mir.) While not pictured in this screen shot, pictures attached to scores now receive a dedicated icon.

This is, at this time, all I can show you of the new system – but again, work is progressing rapidly and we hope to have it launched by September 1st. I must give my heartfelt thanks to Paul Kehrer and Matt Pennig for their tireless work in coding 4.0, as well as all the translators who have provided localizations thus far.

Finally: I know that an article such as this will lead to at least one Pop’n Navy user shouting “WHAT THE FUCK, REMY, PNN STILL HASN’T EVEN HIT 1.0”. This is justified yelling, but: after VJA goes 4.0 (and we do a round of the inevitable bug fixes), the plan is to use the new code base for an entirely newly polished version of PNN. Believe me when I say the results will be far better.