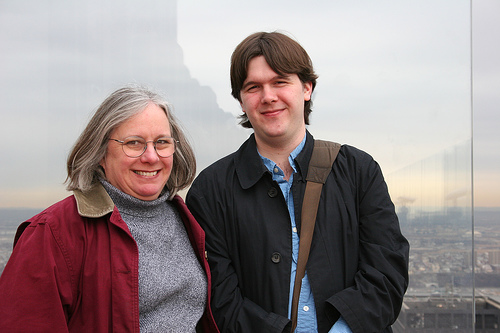 Mom and I, at Top of The Rock last month.

I have been told on more than one occasion that I am difficult to shop for. What many people may not realize is that I get this trait from my parents.

A conversation with my Mom, loosely transcribed, from a few days ago:

About half a year ago, one of my uncle’s health started to go in the toilet. Dialysis was needed. Kidney failure is an eventuality.

My mom (as well as her other brother) went through the battery of tests to see if they would be valid matches for kidney donation. After a few months, the results came in: my mom was a valid match, but she had to lose a fair amount of weight before she could donate.

Oddly, I did not find this out from my mom – the news instead came from my sister, who was quite confused about how to react. I was equally confused and called my mom to get more details.

She answered the phone as though nothing had changed. I asked how everything was, and apparently everything was fine. I waited around a minute, wondering when she was going to mention this obviously life-altering process, and it just wasn’t brought up. So I broached the subject. Her response?

When I was in first grade – still while living in New Jersey – my mom was told during the school Open House by my teacher that I was absolutely horrendous at art. I’m not sure exactly what her response was at the time, but given that it occasionally still comes up and Mom is still terribly resentful about that teacher, I can’t imagine that it was favorable.

Granted, the teacher was right – in terms of the sort of art you do in school, yes, I was terrible. Still am, really, as I can’t draw worth a damn. But perhaps as a result of that conversation, my mom has always contributed to my cultural enrichment on multiple avenues. I was lead towards musical instruments that I both enjoyed (piano) and loathed (trumpet). The house was frequently full of music, anywhere from the entire catalog of The Beatles to the epic John Denver & The Muppets Christmas Album. Trips to the library were numerous, and I was allowed any book I wanted to read. Even now, her visits to NYC are often marked with multiple museum visits.
Somehow, through all that stimulus, I settled on writing (on the blog) and photography. Despite the frequently obscure nature of my posts and pictures, Mom digests it all every day. And if I fail to produce either within a somewhat regular interval, my mom will call or write, wondering if I’ve fallen off the face of the earth.

I could go on gushing with more anecdotes, but I suppose I should get to the point before everyone zones out.

A lot of who I am is thanks to my mom. So many of my traits come from her, and it’s taken me many years to see that. No teenager wants to admit they’re anything like their parents, but as I’ve progressed into my mid-20s, I can see that I’ve taken a lot of good traits from my mom.

Every day, no matter what she’s doing, she’s an inspiration and a source of help more times than I can count. It may sound backwards, but I’m honestly proud of her, and eternally thankful of all she’s given me throughout the years.

So happy Mother’s Day, Mom. (Told you I wouldn’t forget!)