“An academic definition of Lynchian might be that the term “refers to a particular kind of irony where the very macabre and the very mundane combine in such a way as to reveal the former’s perpetual containment within the latter.” But like postmodern or pornographic, Lynchian is one of those Potter Stewart-type words that’s definable only ostensively – i.e., we know it when we see it. Ted Bundy wasn’t particularly Lynchian, but good old Jeffrey Dahmer, with his victim’s various anatomies neatly separated and stored in his fridge alongside his chocolate milk and Shedd Spread, was thoroughgoingly Lynchian. A recent homicide in Boston, where the deacon of a South Shore church gave chase to a vehicle that had cut him off, forced the car off the road, and shot the driver with a high-powered crossbow, was borderline-Lynchian.

A domestic-type homicide, on the other hand, could fall on various points along the continuum of Lynchianism. Some guy killing his wife in and of itself doesn’t have much of a Lynchian tang to it, though if it turns out the guy killed his wife over something like a persistent failure to refill the ice-cube tray after taking the last ice cube or an obdurate refusal to buy the particular brand of peanut butter the guy was devoted to, the homicide could be described as having Lynchian elements. And if the guy, sitting over the mutilated corpse of his wife (whose retrograde ’50s bouffant is, however, weirdly unmussed) with the first cops on the scene as they all wait for the boys from Homicide and the M.E.’s office, begins defending his actions by giving an involved analysis of the comparative merits of Jif and Skippy, and if the beat cops, however repelled by the carnage on the floor, have to admit that the guy’s got a point, that if you’ve developed a sophisticated peanut-butter palate and that palate prefers Jif there’s simply no way Skippy’s going to be anything like an acceptable facsimile, and that a wife who fails repeatedly to grasp the importance of Jif is making some very significant and troubling statements about her empathy for and commitment to the sacrament of marriage as a bond between two bodies, minds, spirits, and palates…you get the idea.”

I discovered something strange today, and it’s made me curious.

This morning, while walking to the train, I noticed this sign next to one of the bodegas near the station: 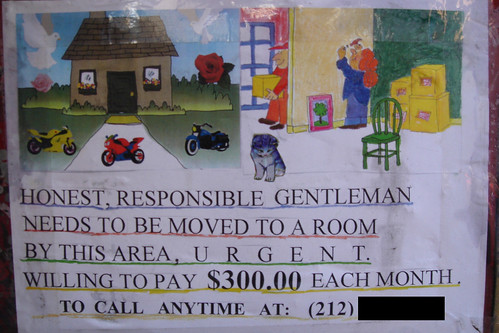 I took this picture for a few reasons; the mix of clip art, the unreasonably low amount of money offered for the room (Astoria may be cheap, but it’s not THAT cheap), the peculiar language (“needs to be moved to a room”? “to call anytime at”?) . I promptly forgot about it and carried on with my day.

In the evening, after Katie and I had dinner and were walking in the same general area, we found another sign: 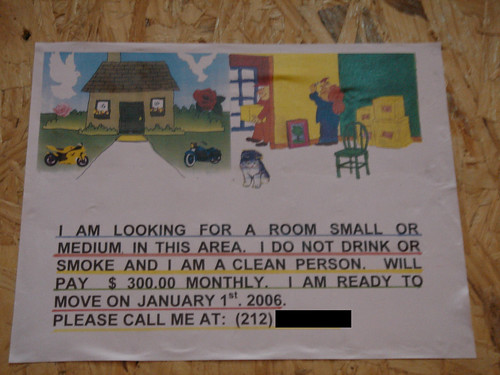 Same sign? Not quite, I realized quickly – the text was different. Different font, too. And there was a date listed. So I took a picture of it as well.

I feel like I’m doing one of those damned “find what’s changed between these two pictures” games, but in a magazine from Silent Hill.