Via Gizmodo, this NYT fluffjob may be the single most insipid article about an iPod I’ve ever read. Time to put on the snark boots, kids.
>Mr. Angus, a second-year graduate student at Columbia Business School, had selected the Shuffle Songs mode on his iPod, which was connected by an adapter cable to his stereo receiver. By doing this, he relinquished control of his 1,300-song music library – and, as he would soon find out, of his party.
Next on Fox: WHEN IPODS ATTACK.
>Such are the perils of using Shuffle, a genre-defying option that has transformed the way people listen to their music in a digital age.
Randomness is going to kill us all and make us defy all genres. I, for one, welcome our entropic overlords.
>Revere Greist, a doctoral student and amateur bicycle racer in Los Angeles, has concluded that his iPod’s Shuffle command favors the rapper 50 Cent – and perhaps more important, that it knows exactly the right time to play 50 Cent’s biggest hit, “In Da Club.” He finds the dramatic beat, coupled with the lyrics “Go Shorty, it’s your birthday,” inspirational.
The next time you are forced to hear In Da Club, please, try to remember this guy, who if he were there with you, would undoubtedly be falling on his knees and screaming HALLELUJAH!
Also note, it’s this guy: 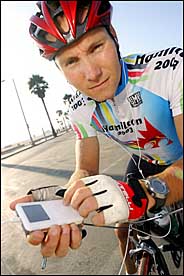 >The iPod “knows somehow when I am reaching the end of my reserves, when my motivation is flagging,” Mr. Greist insisted. “It hits me up with ‘In Da Club,’ and then all of a sudden I am in da club.”
Say that quote I boldfaced out loud, with a straight face. I dare you.
>Lucy Shaw, a social worker in New York, has stopped using Shuffle altogether. “It was totally not reading my moods,” she said. It would play upbeat music when she was feeling low, and dark, somber selections when she was feeling upbeat.
I smell class action lawsuit against Apple for not making a mood iPod. Either that, or a fantastic marketing idea.
>Mr. Cedarholm has contemplated removing all Fugazi songs from his iPod, but he said he fears that “the baton will get passed” to some other band, like his beloved Pixies, “and God help me if I wind up hating them too.”
God help us all, Dan Cedarholm. Your love for The Pixies is a national resource we truly cannot underestimate. I have no doubt that no one loves the Pixies more than you do, and were your iPod to spoil this by playing their music too often, the consequences cannot be underestimated.
>There are ways to circumvent Shuffle – on an iPod at least – by using iTunes, most notably by creating a Smart Playlist.
Circumvent? Circumvent?

If making a smart playlist is invoking “artful maneuvering”, I am apparently some sort of iPod ninja. Who knew?
>Bob Angus, the Columbia Business School student, became enthusiastic at the mention of the Smart Playlist function and wanted to hear more.
>Once when he and his girlfriend were together in his bedroom, he said, his iPod started blasting the Beastie Boys’ “No Sleep Till Brooklyn.”
>”I jumped out of bed as fast as I could,” he recalled. “But it had already wrecked the mood.” In the future, he said, he will try not to let his iPod run wild.
Take THAT, Beastie Boys!
I can’t wait for next week, when I’m sure the NY Times will discover some new way to look like a big fat asshole using technology.