My path from work to the bank is very simple – from the office to 9th Ave, down to 23rd St., and then east sequentially to 8th Ave, 7th Ave, and then 6th Ave, where the Washington Mutual branch can be found. While 23rd St. is a little unique in being four lanes (two in each direction, mostly unheard of in the middle parts of the city), the traffic is usually fairly heavy but with the usual bit of gridlock and people running lights. 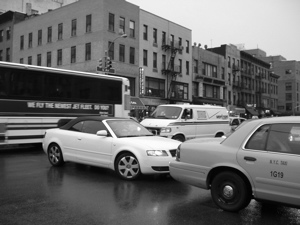 But today on the way, I found myself at the corner of 23rd and 7th, and I noticed that the stoplight was completely out, as were the walk signals. There was no cop to be seen, and this worried me, as I did have to cross the street without being hit by a car.
And suddenly, I realized that the drivers had sorted this out for themselves. As the east-west traffic slowed, the southbound drivers all honked cautiously as they entered the intersection. The pedestrians going north-south crossed, and no one tried to cut across east-west. When the traffic slowed on 7th, 23rd St. resumed, and those of us walking east-west crossed as though we had a walk symbol.
It just strikes me as very odd that the lack of a traffic light leads to better traffic patterns than when there IS a traffic light.