Yesterday, in my linkblog, I linked to a [fantastic speech by Greg Costikyan](http://www.costik.com/weblog/2005_03_01_blogchive.html#111069190589189590), given at the “Burning Down The House” rant session at the Game Developers Conference. It hit a lot of salient points, but in particular this portion rung true:
> You have choices, too. You can take the blue pill, or the red pill. You can go work for the machine, work mandatory eighty hour weeks in a massive sweatshop publisher-owned studio with hundreds of other drones, laboring to build the new, compelling photorealistic driving game– with the same basic gameplay as Pole Position.
> Or you can defy the machine. You can choose to starve for your art, to beg, borrow, or steal the money you need to create a game that will set the world on fire. You can choose to riot in the streets of Redwood City, to down your tools and demand an honest wage for an honest eight-hour day. You can choose to find an alternate distribution channel, a different business model, a path out of the trap the game industry has set itself. You can choose to remember WHY we love games–and to ensure that, a generation from now, there are still games worthy of our love.
> You can start today.

Those who have been here a while will hopefully still remember I used to work for a [small Mac-centric gaming company](http://www.freeverse.com/), and there was some nice synchronicity between the timing of that rant and a product release today:

Back in November was the uDevGames contest, a yearly Mac programming competition where people can enter any game they’ve programmed for the Mac in hopes of winning fabulous cash and prizes. Developers get to make a name for themselves, Mac gaming companies can find new talent, and end-users get a flood of semi-nifty to badass games to try out. Freeverse had, before I left, found at least one programmer through the competition.

[I did some reviews](https://vjarmy.com/archives/2004/11/udevgames_2004.php) of games I liked, you might recall. Out of the five games I listed under “Fantastical”, the one that had captured my interest the most by far was [Kill Dr. Coté](http://www.udevgames.com/downloads/?dlid=32). A major throwback to Smash TV and/or Robotron, it wasn’t a deep game but fit a gaming niche that I had been sorely lacking lately – the Quick One-Off Game. It was the only game I took with me for the Sakai conference in New Orleans to keep me occupied during the downtimes, and it worked brilliantly.

As part of one of my annoying character traits, I of course had to mention this game to everyone I knew who would care – anyone with a Mac, preferably those in the gaming industry. I went out of my way to throw this at Ian and Colin Smith, brotherly overlords of all things Freeverse. When I saw the [uDevGames voting results](http://www.udevgames.com/contest/2004/winners/), where the game won Best Gameplay but not overall game, I sighed and let my Coté dreams subside.

But Ian, much unbeknownst to me, had taken the ball and started bouncing it with [Justin Ficarrotta](http://www.justinfic.com/index.php), the programmer of this bundle of joy. The game was finessed, given some new assets, and tweaked to perfection.

And behold – Kill Monty was released today. And it makes me happy because, among other reasons:

* It still remains a game very easy to pick up for however long you need to be distracted and then put down.
* It maintains the core Coté features I loved – Survival mode, five difficulty settings, countless red pixels, the Story button.
* It has the thing Coté needed – variety. More levels, enemies, and lead characters.
* There are unlockables. There aren’t enough computer games with unlockables.

I was talking it over with another friend today, and I nearly died laughing when he said “It’s better than Doom 3 because your Mac can actually run it.” But I don’t actually think the comparison to Doom 3 is invalid, after some consideration. We’re talking a game that’s less than one-third the price that could quite possibly give you the same amount of entertainment. Your $12.95 goes directly to the people who made the game possible – programmers, artists, sound creators – rather than getting splintered among manufacturing efforts and licensing fees. And yes, there’s no [performance issues](http://arstechnica.com/news.ars/post/20050315-4704.html) with Kill Monty.

So as one somewhat biased former gaming company coot ranting on his personal website, take my advice: If you have a Mac, and you’re running 10.3, [download Kill Monty](http://www.freeverse.com/download/select.php?name=killmonty&platform=osx) and give it a try. And if you want to see other games like it, [plunk down the $12.95](https://store.freeverse.com/). It’s worth it – the flamethrower rocks. 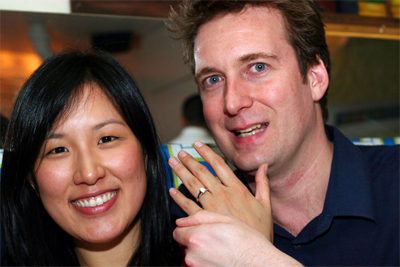 Huge congrats to Jen Chung and her newly minted fiancée Jay, who got engaged over the weekend on the Brooklyn Bridge. When Jen told me the news this morning, my immediate literal response was “OHMYGOD!!!!!!!!!!”, followed by “I can’t believe I just ohmygodded!”

Slice Club was definitely worth the trip.

Big thanks to Youngna, Laren, Nichelle, and of course Adam the Pizza Overlord, for all making the night so damn enjoyable. It was sad that the skating was slightly thwarted by The Trump Zambonis, but it wouldn’t be New York City without Donald Trump somehow screwing it up, I guess.

I look forward to the next Slice club. For now, I go to bed with a full stomach and aching feet.